Hello again, everybody, it's time for Prime Time Wrestling with Gorilla Monsoon and your host, Bobby "the Brain" Heenan. This week, Gorilla promoises us a whole host of "exciting wrestling action, feautring the greatest physical specimens in the world". We'll also have a "girls' match". Errr...okay. But with so much going on in the World Wrestling Federation, let's get down to ringisde for..

Kamala has recently returned to the WWF, basically picking up right where he left off. Which is why we're getting this match, from MSG and 1984. Gorilla and "Mean" Gene Okerlund are on the call. The role of Friday was a rotating one, and I don't think this it's Steve Lomardi, as he has a fairly slender build. Kamala attacks before Patterson can remove his jacket. Thump, thump, choke, thump, repeat. Patterson pokes the eyes and follishly tries a slam. More thumping, then Patterson begins duckin n' dodging, hoppping outside to the floor. Patterson returns with the lethal foot stomp, but it's not long until we're back to some Kamala thumpin'. Big splash to the back gets the 3 count for Kamala. Not off to a good start, on this episode.

In the studio, Gorilla acknowleges that this was an older match. "Mean" Gene then wanders in to the set, perfectly welcome due to a "standing invitation" from Gorilla. Gene is introduced as the "host of All-American Wrestling and Wresling Spotlight", but not TNT, as that show was may be in its last week. Gene produces a list of guys who have slammed Big John Studd, saying Heenan owes each of them $15,000. Some are definitely retroactive, so it's kind of a weak segment.

Another MSG match, from back in 1985. As we've seen in recent Prime Time episodes, the Moondogs have been getting a small push, but this heel vs. heel jobber match-up is still strange. Joined-in-progress as they're brawling. Rex slams him on the top rope and drops an elbow for 2. Things heat up with a Moondog Reverse Chinlock. Side back-breaker gets 2 and we're back to the chinlock. Commentators are "Mean" Gene and Gorilla...who both seem almost as bored as the chanting fans. Gibbs gets a mild pop as he gets the knees up to block a splash. Rex begs him off, in the corner, then suckers him in with a reverse elbow. Elbowdrop and here comes the chinlock. Backdrop turns the tide for Gibbs, then they slug it out. A big reverse atomic drop from Gibbs, followed with a whip and a reverse elbow for 2. Slight belly-to-back side suplex, but Rex makes the ropes. Gibbs puts his head down, allowing Rex to thump him then land a reverse neck-breaker to get the 3-count. Out of all the matches they had in their inventory, they went with this?!

George stumbles in, in full cartoon mode, shouting out a few words. "Prime Time! Tough Wrestlers! Weasel!" Then he grabs Resnick and drags him to the camera, hollering: "See?!" He name-drops Macho Man Elizabeth before saying "bye-bye". Pretty stupid, but it was kinda' fun how Resnick played along with him. 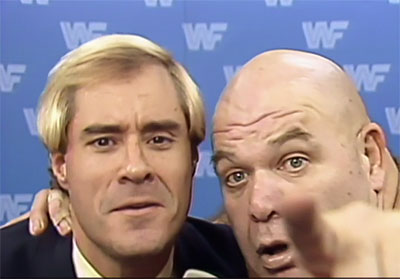 During the intro, Heenan wonders if they shouldn't be doing laundry or grocery shopping. Gorilla's not much better, as he completely blows the team combinations. More retro MSG with Gorilla and Howard Finkel on the call, as we flashback to sometime in 1984. Lots of whistles and cat-calls as referee Dick Kroll checks each woman's gear. After some stalling, McIntyre and Petersen work on Patterson's arm, including a one-legged monkey-flip. Mitchell thumps away on Petersen, cluminating in a dastardly front facelock WITH a hair-pull. Patterson comes in for a standing side headlock as Gorilla comments: "looks like she hasn't missed too many meals". We get more basic "wimmens rasslin"...for a good 15-20 minutes, with Petersen getting pummelled. Heel miscommunication leads to the hot tag to McIntyre. Two big monkeyflips to Patterson, then a reverse bodyscissorcs on Mitchell for 2. All four brawl and in the confusion, McIntyre leaps over Patterson with a sunset flip to retain the titles. No way this justified 20+ minutes of airtime.

Back in the studio, Heenan finally realizes that the phone is now on Gorilla's side of the desk, and complains about it of course. If you remember our last episode, Heenan ended up breaking the phone. So the banana phone still hasn't arrived.

The weekly syndicated leftover, taped from the Providence, RI Civic Center. Yup, this is a fairly famous match featuring a young Mick Foley, years before he was on anybody's radar. Bulldogs are the tag team champs, yet I only mention this because it means we finally have a "current" 1986 match. Vince McMahon and Jesse "The Body" Ventura are on the call. Davey Boy Smith and Thornton fight over and armbar for the opening sequence. Smith reverse a pinning attempt with a rolling "skin-the-cat" monkeyflip for a quick 2. Smith ends up on Thornton's shoulders and does a forward roll for another 2. Tag-off on each side, as Dynamite Kid comes in to hit his snap-suplex on Foley, followed by a double-underhook suplex and a backbreaker. Diving headbutt, then Smith returns for a big powerslam. Delayed vertical suplex gets 2 for Smith. Foley goes to the eyes, but stumbles as he tries to deliver a reverse elbow. Charging clothesline from Dynamite, then Smith comes in to plant Foley on the top turnbuckle. Dyanmite tags right back in and delivers a belly-to-back suplex from the second rope to get the pin. Your basic squash, but it was humorous to see the egotistical Foley botch an elbow. 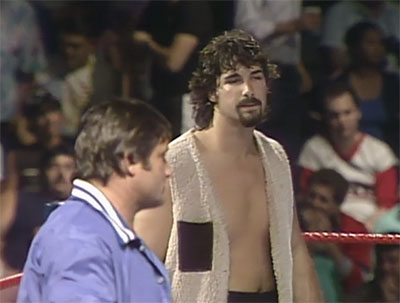 Huh. So TNT's not dead, yet! Nikolai brings out a "Russian bear" and they goof around. Slick says that the bear "had the good sense to be born black". Lord Alfred Hayes tries to swing the conversation by wondering if this is a wrestling bear, but Gene cuts him up and wraps up the segment. Highlight is that the bear has his own WWF on-screen graphic! 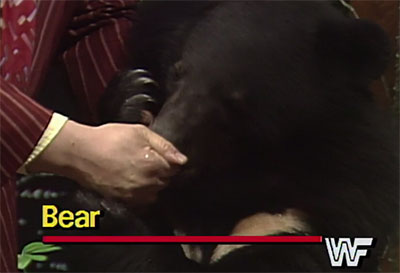 Yes, two Moondog singles matches! Joined-in-progress from Boston Garden with Gorilla and Alfred Hayes on the call. Once again, we have VERY audible "BORRRR-ING" chants, due to Rivera working an armbar. Slam and a few kneedrops and Rivera keeps targetting the left arm. Gorilla and Al begins rambling, going off on Bruno Sammartino's career. Back from commercial break, Rivera lands a sunset flip for 2. Charging knee from Spottie gets 2. A Chinlock Happens. Irish whip into the corner, then Rivera misses an elbow. Spottie whips him to the ropes for an atomic drop, but misses something from the second rope. After ONE punch, Spottie oversells and does the Andre the Giant Special by getting his arms caught in the ropes. In a clever spot, while the ref tries to untie Spot's arms, Rivera goes over to the opposite side and tightens the ropes to provide more pressure. Coupla' rights, kneedrop and a drop-kick get 2 for Rivera. They hit the ropes, but Spottie catches him and delivers a shoulderbreaker to get the pin. Y'know, the last 2 minutes weren't too bad, but the first 13 stunk.

Macho points his ANGRY PINKIE and threatens George Steele. He holds up one of Elizabeth's shoes, bragging how she's his property.

The Dream Team (c) vs The Killers Bees

Greg "The Hammer" Valentine & Brutus Beefcake vs.B. Brian Blair & "Jumpin'" Jim Brunzell
Back to Boston, and we're at least 6 months old-- again-- as the Dream Team are still the tag champs. Cameras gets a shot of Jesse Ventura returning to ringside to join Gorilla. Blair and Valentine start with some chain wrestling, including an armbar into a fireman's carry from Blair. They hits ropes, as Blair hits a somewhat awkward slam on Valentine, then follows it up with a dropkick... and one for Bruti. Valentine gets atomic dropped right into Bruti as Blair gets the crowd mildly excited. The champs take a breather on the floor. Back inside, a belly-to-back suplex gets 2 for Blair. Double-bee-elbow, then Brunzell focuses on Valentine's arm, then the legs. Humorous studio break has the Brain alone on the set, completely lost on the programming schedule. We return to Boston with Valentine still getting his legs worked over. Blair even hooks on the figure four, momentarily, until Bruti saves. The champs eventually manage to cut off the ring and thump away on Blair. Slam from Bruti, then Valentine off the top with a forearm. Double-(dream) teaming continues, as they toss Blair over the top rope. Hammer with an elbow from the second rope for 2, then he does the usual softening up of the legs. Bruti puts his head down for a backdrop, allowing the "hot tag sequence" to Brunzell. "Double noggin knocker" and a drop-kick to Bruti for 2. All four men are in, as Brunzell hooks a sleeper on Bruti. Referee Danny Davis shoo's Blair back to the corner, so Valentine leaps in and hits Brunzell in the head with a flying double axe-handle from the second rope. Ref turns around just in count the 3 for Brutus, as the champs retain. Back in the studio, Gorilla points out Danny Davis's bad refereeing as suspicious. I think that's the first time they've mentioned the Danny Davis angle, so I guess it's off and running.

Why'd You Watch This?:
TWO two-year old matches, a jobber squash, two Moondog matches and a "feature match" that had been run all over the country...which was also from the past. Needless to say, this is a completely insignificant episode and should be avoided at all costs.