Hello everyone and welcome. It's Gorilla Monsoon and your host, Bobby "The Brain" Heenan. This week, we have a "loaded" show with footage from the recent Canadian National Exhibition in Toronto. Where upon, history was made as one of the largest wrestling crowds ever, some 71,000+, gathered. The show we know, today, as "The Big Event". Heenan takes credit for making it all happen. But with so much going on in the World Wrestling Federation, let's get down to ringside for...

I'm bummed to see a Morales match on the card, but less than usual, as this is once again from the August 26, 1986 MSG show. So I only have to watch it, but thankfully not recap it. To save you a click, the finish: they go outside the ring, where Morales gets some payback by blasting Macho into the railing. They fight at ringside, as Macho tries a chair shot. The cameras miss exactly what happens, but it seemed like the chair missed Pedro and the recoil hit Macho. Morales rolls back into the ring...and wins by countout?! Yup, that's the official decision. Morales did the best he could, but the match ended up being simply "luke warm".

In the studio, Gorilla wonders why Morales thought he had won the title. He's been in the WWF for a long time and had even held that particular title for an extended period. Whoa, CONTINUITY!

Gorilla plugs Kiniski as some of the "exciting new talent" coming to the WWF. Back to the same MSG show...and your finish: Thornton goes for a slam, but Kiniski hops out of it, applies a belly-to-back German suplex, bridges, and gets the 3 count. This match might have worked in Florida, but in NYC it's a turd. This was also joined-in-progress, so some of the "BORRR-RING" chants were left out.

At the desk, Gorilla narrates the aerial helicopter footage of the "Big Event" at CNE Stadium. "It was a happening"!

Now here's some footage from that HAPPENING. We've also covered this in detail, years past, courtesy of our Longtime Esteemed Colleague and Personal Friend, Scrooge McSuck...so go HERE for the full details. One note is that during the intro, Gorilla makes a point that King Tonga would now like to be called "Haku". So, the summary, copied from our Colleague:
Haku with chops and rights, then comes off the top rope with a cross body press for a two count, as the bell rings at 11:32, and it's a 20-Minute Time Limit Draw... yeah, they REALLY clipped out a ton of resting, didn't they? Even in short form, it's not an awful match, but incredibly dull. You would have more fun watching grass grow, probably.

Heenan: "Ted Arcidi's probably thrilled to be booked". Yup, more from the Big Event and some borrowing: Garea with a dropkick to take Arcidi off his feet, but he quickly gets caught in a bearhug, and Arcidi quickly wins by submission at 2:40. Thank you for keeping it short... Arcidi takes his sweet time releasing the hold, because he's suddenly a jerk who stinks in the ring, rather than a good guy who stinks in the ring.

Gorilla acknowledges Arcidi's "attitude change", back in the studio. He wonders if Heenan may have gotten in Arcidi's ear....then talks about the pending return of "Superstar" Billy Graham. You know Superstar's going to be a face, this time, because Heenan instantly slams him.

Yup, more Big Event: Slater misses an elbow drop, but takes Sharpe down with a Russian leg sweep. Slater to the top rope, and a bionic elbow is enough for the three count at 2:25. Pointless filler. Better than I could've said. Gorilla and Brain discuss the claim of "Canada's Greatest Athlete". They switch gears to talk about the Machines...and Heenan cites a WWF Magazine article that states "New Japanese import has a strong resemblance to a French model".

The big return of "Rowdy" Roddy Piper, who has taken back Adrian Adonis's Flower Shop with his old "Pit". Ken Resnick is the guest, but before he can get a word in, Adonis, "Cowboy" Bob Orton and Jimmy Hart invade the set."You're old news, Piper. I'm 1995!" Adonis challenges Piper to a Flower Shop vs. Piper's Pit debate, two weeks from now. Piper teases doing it, now, but suckers Adonis into a trick chair, causing him to fall on his tushy.

They discuss the recent transaction wherein Slick bought 50% of Freddy Blassie's assets. Resnick asks why the Iron Sheik and Volkoff and Slick answers: "as a black American living in this country, today, I can identify with the prejudice and racial bigotry and disrespect that Iron Sheik and Volkoff have gotten from the people". Heck, that's...very altruistic of him! Slick then concludes by saying he has a lot of money and assets.

Heenan claims that this is the "feature" of tonight's program! Orndorff says that his attack on Hulk Hogan wasn't despicable, it was a matter of gaining self-respect. He actually gets a good response from the TNT crowd as he predicts that he'll be the next World Champion. The more you watch this angle, today, you feel that Orndorff's the face, more and more. Okay...but he does look more than a little dorking sitting around in swim trunks and flip-flops, here. 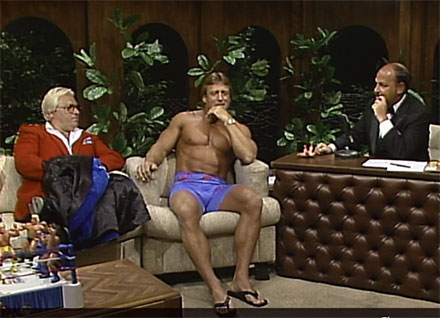 The Rougeau Brothers vs. The Dream Team

(Jacques & Raymond Rougeau vs. Greg "The Hammer" Valentine & Brutus Beefcake)
"Feature match" to close things out from "The Big Event". Valentine goes for the Figure-Four again, but Raymond sunset flips him and illegally gets the three count at 14:57. Other than the whacky finish, a pretty solid tag match, although I'm sure it could've stood to have been trimmed by a couple of minutes. Johnny Valiant goes berserk in the broadcast booth over the loss, of course.

As the show closes, Heenan's on the phone with his secretary Miss Betty...and the phone falls apart on him. I remember somebody told me this in the "Comments" section awhile back, but I'm wondering/hoping the faulty phone leads to the debut of the banana phone!

Why'd You Watch This?:
As it's a buncha' regurgitated matches, this could be considered a "filler" episode. Yet, if you were to flashback to September 1986, when neither the MSG show or the Big Event were widely seen, this was another nice treat. Much better than watching the weekend jobber squashes.