Hello again, everybody, it's time for Prime Time Wrestling with Gorilla Monsoon and your host, Bobby "the Brain" Heenan. Heenan acknowledges that his name is now on the opening graphics. Of course, in typical Brain fashion, it actually happened a few episodes ago and it took him this long to realize it. They also argue over the tag team contendership of King Kong Bundy & Big John Studd. But with so much going on in the World Wrestling Federation, let's get down to ringside for...

Looks like this match is a leftover or re-broadcast from a weekend syndicated show with Vince McMahon and Bruno Sammartino on the call. Mike Saxon is still trying to use the "1984 Michael Jackson Impersonator" gimmick; so all litle kids in the front row, be on alert (*hey-oh*)! Heenan gets the house mic from Howard Finkel and announces himself as "Manager of the Year". Powers tries to out-muscle Studd and gets shoved around. Bundy comes in for a reverse elbow, then allows Saxon to tag in for some more. Big slam from Bundy, then brings in Studd for a double-team Irish whip and clothesline. Fans rile up the Heenan Family with chants of "Andre". Bundy flattens Saxon, but pulls him up at 2. Studd crushes him into the corner, then whips Bundy in. Saxon's dead weight, so Bundy drops an elbow and gets the FIVE COUNT.

"Mean" Gene Okerlund On Location in Japan with The Machines

Gene's tracked down Giant Machine and Super Machine at restaurant. Super does most of the talking, saying he has a dual Master's degree in education and business administration from the University of Tokyo. They talk about their sensei, "Wakamatsu-san" and how they need to go to the US and the WWF to prove themselves as "#1 Ichiban". Wakamatsu's set them up with "Captain" Lou Albano. Gene mentions how Giant Machine reminds him of someone...so they counter that it's simply because they're so popular in Japan and Gene's probably seen their picture in a magazine or billboard. Giant Machine claims to be from the island of "Fu-you-too". Back in the studio, Heenan instantly protests that Giant Machine is Andre and goes into a tizzy. 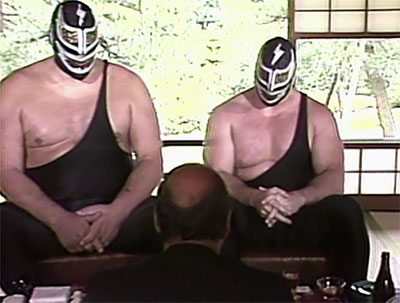 Gorilla's in the booth, solo. Black Venus sort'a has a Grace Jones meets Tina Turner bad-ass vibe. Nagayo immediately runs up and drop-kicks Kai, followed by a criss-cross sequence and some chops for a 2 count. Venus gets the best of a knucklelock with Asuka, turns it into a monkeyflip, then uses the ol' 'own-arms-criss-crossed and choking you' thing. Big slam gets 2 for Venus. Lukewarm tag to Nagayo who delivers what was supposed to be a big running kick to Venus... but Venus ducks early, as even Gorilla mentions it on commentary. Kai comes in for a few punches, then back to Venus who gets hit with a drop-kick and slam for 2. Whip, windmill chop to the tummy and an elbowdrop gets 2 for Asuka. Venus with a double-leg takedown, but catapults her right into Nagayo for the tag. Kai with some elementary offense on Nagayo. Kai tries the same on Asuka, but Asukta comes off the ropes with a spinning heel-kick. Crush Girls clean house, with Nagayo's flying clothesline from the top on Venus. Double-team chop on Venus, then Asuka hoists her over with a German suplex, and bridges to get the pin. Looked a little sloppy, at times, but I think that's about par-for-the-course for 80's women's wrestling.

For the second straight week, Resnick incorrectly claims Macho's using the 30-day rule. Generic threats for Tito Santana, George Steele and the Junkyard Dog. Macho then weighs in on the Prime Time "who is the host" controversy, backing Heenan. Nice little callback to how Heenan was pursuing Macho Man, about a year ago.

"Renowned" psychologist Dr. Alfred R. Kissinbaum crashes Savage's interview segment and recalls their earlier therapy session. Kissinbaum claims to have researched other "macho" icons, like John Wayne, Clint Eastwood and Burt Reynolds. Flashback to a therapy session, as Macho Man makes some silly self-affirmations, puns and jokes via a free word association test. Things go south when they get to the word "animal", as Savage storms off the set, complaining about George "the Animal" Steele. Kissinbaum claims that Savage has severe insecurities and basically defines the entire Macho Man character. I suppose it's mildly entertaining, but it was clear from the outset where this whole segment was going.

Heenan talks how pointless it is to have "Oregon" on Haynes' trunks. "What?! I don't put BEVERLY HILLS on my clothes!" Funny, cuz' I'm pretty sure the Brain did that at one time. Joined in progress, from what looks like Maple Leaf Gardens with Gorilla and the Brain on the call. Haynes is working a seated reverse chinlock and nobody's into this. Haynes drops an elbow, gets a 2 count, then right back to the chinlock. Brain sells it as Haynes working the neck and head to set up the full Nelson. Marconi with some forearm shots, but Haynes no-sells, whips him in for a clothesline, then slaps on the full Nelson. Fans cheer, because this snorefest is over.

Waltzing in with a Hawaiian shirt, Jake runs down Resnick by saying it's sometime better to keep quiet and be thought a fool, instead of speaking up and confirming it. Jake relishes in his recent beatdown of Ricky "the Dragon" Steamboat on a recent Saturday Night's Main Event.

More MLG and don't laugh, but this would've been a "main event", circa 1982. Animated start, as they hit the tops and SD performs a hiptoss and a side-mare takedown. To the ropes, again, and this time Race gets the advantage with a high-knee. Kneedrops, diving headbutt and a piledriver for 2. Reverse neckbreaker gets another 2, followed by a gut-wrench suplex and a vertical suplex. Irony, as S.D. sells a headbutt and another from the second rope. S.D. "Joneses up" with his own headutts, but Race picks him up for a vertical powerslam and gets the easy pin. Back in the studio, Heenan states that Race is "the king". I'm not sure when his official coronation; with the cape, crown and everything; occurs.

From MSG, with Gorilla and Alfred Hayes. O works the crowd a litte, by stalling and hopping out of the ring. Sidemare takedown from O turns into a reverse hammerlock for Morales. Rope-break and they get the headlock bug. Big clothesline and a flying forearm from O gets 2. O picks him up and simply chucks Morales over the top rope. Morales fights his way back in, tees off on O, delivers a backdrop, then finishes him with a backbreaker for 3.O attacks after the decision is announced, but Morales thumps him out of the ring. Fans seemed to like this, but not I. In the studio, Heenan compares Morales to Chico Escuela-- "wrestling's been berry, berry good to me".

More leftover syndie action. Brooks just looks like a big pillow. And now, a poem from Mr. Poffo: "The World Wrestling Federation has caused a culture shock in every phase of our society, from classical to rock. In triumphant jubilation, every social class is one, with a single common interest: just to have a little fun. I've seen the rapture in the eyes of fans from every nation. You've made us what we are today: World Wrestling Federation!" I guess Poffo didn't want a pre-match ass kicking from Brooks or K-9, so he played it safe. Poffo and Brooks start, with Poffo easily applying a hip-toss, then a dropkick. He goes after K-9 but gets caught in opposite corner and eats a beating. K-9 with a slam, a leg-drop, but misses a second one. They go outside for a bit, then Wells tags in to slam K-9 for 2. Wells gets beat on and double-teamed for awhile, but escapes with a headbutt. Poffo's in with a flurry of closed fists to K-9's head and pulls him up for a dropkick. K-9 gets the drop on Wells with a couple of forerms and a front facelock. Wells turns it into a suplex, then tags in Poffo for a flying somersault legdrop. Wells coems in for a flying shoulderblock and gets the 3 count on K-9. Huh, so I guess the "flying football shoulderblock" was Wells' finisher?

The Killer Bees vs. the Hart Foundation (w/Jimmy Hart)

(B. Brian Blair & "Jumpin'" Jim Brunzell vs. Bret "Hitman" Hart & Jim "The Anvil" Neidhart)
Back to MLG and, for what it's worth, the Harts are still sporting their blue-n-black attire. We also have Jesse "The Body" Ventura in the booth with Gorilla Monsoon, making me think this match is slightly dated. Blair and Hart start, hit the ropes, and Blair hits a belly-to-back suplex for 2. Anvil comes in and eats a high cross-body for 2. Bees tag in-and-out, working Anvil's legs. Hart comes in and gets the same treatment as his partner. To the ropes and a sunset flip scores 2 for Brunzell. Fun spot, as the Bees do a double step-over toehold. Blair hooks a figure four, but Anvil makes the save as the Harts finally take over. Blair to the ropes, but Hitman does his usual blindside cheapshot and nails him in the ribs. Double-team elbowdrop from the Harts gets a 2 count. Surprise sunset flip from Blair, but the ref's busy arguing with Hitman. Blair keeps getting worked over, eating Hitman's signature moves and the Harts' double-team whip into the corner. Blair reverses an Irish whip, so Hitman can do his usual THUNK spot into the turnbuckle. Heel miscommunication allows the hot tag to Brunzell for a house cleanin'. Snapmare and a vicious leg-drop from Brunzell, followed by his drop-kick, of course. Bees double-team Hitman, so the ref shoo's Blair away. Brunzell bounces the ropes and gets smacked in the external occipital protuberance by the Anvil. Hitman makes the easy cover as the Harts steal the victory. Crisp match with a good tag-team formula, but these teams have crossed paths so often; separately or as teams; that the match-up wore a little thin.

Wrap-up segment has Heenan madly insisting that one of the Machines is Andre the Giant. Gorilla welcomes us to tune in, next week, when we'll see Hulk Hogan and Paul Orndorff taking on the Moondogs.

Why'd You Watch This?:
Hey, this episode has exactly 0% Danny Spivey! But Lanny Poffo returns. Like most WWF television of the "Kayfabe Era", after watching a few of these, you kinda' fall into a groove and understand their pattern. You know that there are some segments you just have to sit through, while only about 1/3 of the show is worth your time. Whether that 1/3 is studio segments, interviews, angles or matches varies from week-to-week. So this time around, I'd say the Machines angle, Jake the Snake's interview and the Harts/Bees are worth watching.