Hello again, everybody, it's time for Prime Time Wrestling with Gorilla Monsoon and your host, Bobby "the Brain" Heenan. This week, the confounding phone has been removed from the set, by the order of Gorilla and to the dismay of the Brain. But with so much going on in the World Wrestling Federation, let's get down to ringside for...

We're coming from Madison Square Garden with the fan favorite team of Gorilla Monsoon and Jesse "the Body" Ventura on the call, meaning this took place before WrestleMania 2. Morales no-sells an atomic drop, then spins around and delivers one to Orton, who sells like he's just had an enema. Orton with a kneelift and clubs Morales into the corner, then works him over on the apron. Morales stumbles back to the center and eats a flying forearm. Another forearm, off the ropes, knocks Morales to the floor. Orton follows out to slam him on the concrete. They brawl in and out of the ring, until Orton gets disqualified for an illegal suplex; he suplexes and crotches Morales on the top rope. To the surprise of one kid in Vermont, they brawl after the bell, with Morales clearing the ring. Huh... did Morales ever cleanly pin anybody of mention (and not-named-Johnny-V) in 1986?

More pre-WM2 MSG, but with Gorilla & Lord Alfred Hayes. Spivey & Kirchner must be pretty low on the babyface pecking order, because they're not booked to run in and interrupt Volkoff's anthem. Sheil and Kirchner start, so they can tease the enivitable confrontation with Volkoff. They do some criss-cross (JUMP! JUMP!) action, as Kirchner looks a little sloppy. Atomic drop and Kirchner splits Sheik's legs. Volkoff comes in and it's a basic brawl. Clothesline and a loogie from Sheik, as they work over Kirchner. Surprise sunset flip pin attempt from the Corporal is missed by the ref. Spivey tries coming in, which allows some double-teaming on Kirchner. Hot tag to Spivey as he cleans house with a half-assed slam on Sheik and an arm-wringer on Volkoff. Volkoff fights back and manages a full Nelson. Spivey counters with his own, but a rope break is called. Reverse elbow, loogie, abdominal stretch and gut-wrench suplex from Sheik. Camel Clutch is locked in... but Kirchner makes the save. Spivey reverse a vertical suplex and they both tag-off. Kirchner with some elbowsmashes on Volkoff for 2, then a four-way brawl errupts. Drop-kick from Kirchner on Volkoff, then sets up Sheik for his Samoan Drop finisher. Volkoff distracts, allowing Sheik to sneak out of the hold and blast Kirchner with his loaded boot. 3 count is academic as Sheik scores the pin. Not as bad as I was expecting, but very ordinary.

Killer Ken starts out by mentioning Sheik's Olympic background... then Sheik goes into his usual rambling about being double-crossed by the WWF and Hulk Hogan. 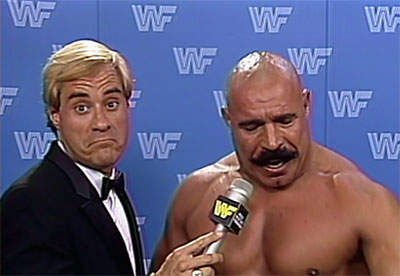 I know I bitch about including these segments, but this one's so damn corny, it needed to be seen again. Muraco & Fuji try their hand at "stand up comedy"; making no effort to hide their cue-card reading skills. Very "Gong Show"-esque, as it's so bad it's funny. "We played miniature golf. The guy was so short he had to take a camel across the sand trap". Muraco's timing is intentionally awful, as hosts "Mean" Gene & Alfred Hayes are cracking up. Muraco breaks script and throws out bad insults towards Hogan, the Junkyard Dog and Paul Orndorff. He concludes by repeating his Reagan/Gorbachev/Marcos joke from a few episodes back. Y'know, if he hadn't been involved in the upcoming Flower Shop/Piper's Pit war, they would've had to turn Muraco into a babyface.

Two weeks in a row that Wells has been in this same segment/time slot. It's very similar to last week's Wells/Funk match, too. Only difference is that Wells has "Master G" on the side of his pants. Wells gets some nice armdrag/hip-tosses to frustrate Herc. Herc fights back with the punchy/kicky special and slams him. Jesse puts over Wells and the Canadian Football League as being extremely rough-and-tumble. Apparently, you're not allowed to block on punt returns? Really? Herc up top and Wells catches him in mid-air and delivers a side back-breaker. Wells goes for the 3-point stance charge in the corner, but eats turnbuckle. Herc drops a fist and scores the 3 count. As bad as you'd think.

In the studio, Gorilla promises another "surprise" for Heenan. He also has a magazine that shows pictures of the Machines, which he hides away. Heenan spends the next few segments shuffling through magazines.

Gorilla and Hayes talk about Brunzell's new beard and how he's been undefeated since starting it. Plugs for Stu Hart, the Dungeon and Bret's 12 brothers and sisters, too. Starts off with some vintage AWA action, as they trade holds and go to the mat, following a flying head-scissors from Brunzell. Brunzell soons targets the left arm and shoulder, applying a seated arm-wringer. Hart fights back and works a reverse chinlock. Brunzell tries bouncing off the ropes to break, but Hart works it into a bulldog. The Society of Resthold Haters (NYC Chapter) makes their presence known. Brunzell gets a surprise drop-kick to knock hart out of the ring, but he's right back in to cinch the reverse chinlock in 2 seconds-- no exaggeration. Another desperation surprise, as Brunzell gets a sunset flip for 2. Hart hooks him in the ring-ropes, but misses a bodypress and eats rope when Brunzell escapes. Hart with two legdrops and a backbreaker for 2. Europan uppercuts from Hart, but when he goes for a third, Brunzell ducks under and turns it into a backslide pinning predictament and gets the 3. Decent little match. Sure, the Harts and Bees seemed to be constantly matched up from 1986 to 1987, yet they seemed to pull out different stuff, every time. Yeah, you can call this "Best Match on This Show".

Adonis tries to tell a joke: "you wake up in the morning, put Preparation H on your toothbrush, and two days later your gums shrink".... then he pauses and waits for approval. Adonis cuts a basic promo about how he's a excellent wrestler. Yeah, no weird cross-dressing/gender-bender stuff.

Yes, this is happening. We're joined-in-progress with a shoulderblock challenge and a headbutt from HBJ. Bundy misses a kick, hits the canvas and HBJ covers with an elbow for 2. Into the corner and Bundy blasts him with a big kneelift, then kicks him out to ringside. Big boot, clubberin', headbutt, reverse elbow and a clothesline gets 2 for HBJ. Bundy reverses an Irish whip and hits the avalanche into the corner. Bundy's off the ropes with a splash and scores the easy 3. Heenan gets the mouse mic and announces the winner and "Next Heavyweight Champion of the World". Just a way to build-up Bundy for WrestleMania 2 and Hulk Hogan.

Joined-in-progress, with Afi flipping out of a hammerlock and rolling up Shaw for 2. A (mildly) high cross-body gets another 2. Monkeyslip out of the corner for another quick count. Gorilla bills this as Afi's MSG debut and refers to him as "Superfly". Criss-cross (JUMP! JUMP!) and Shaw takes over with a high knee, hip-toss and a kneedrop for 2. Shaw sets up for a piledriver, but Afi counters it into a back-drop. Afi chops away, wiggles his legs and the crowd LOUDLY boo's him! Flying headbutts, then Afi goes up top for a flying bodypress and gets the 3. The MSG fans are pissed that they're trying to replace Jimmy Snuka. Once again, I'm wondering why they'd show this particular match with its negative audio.

Going back even further, as this match is almost a year old and in the midst of the "Orndorff bounty" angle. Orndorff starts off hot, chasing Heenan and thumping Studd out of the ring. Orndorff tries a bodypress, but Studd catches and plants him in the corner. Studd tries coming off the top, but Orndorff blasts him in the tummy. Studd's back in control with an atomic drop, then pushes Orndorff out and slams him into the ringpost. Back in, Studd clubs some more and tosses Orndorff oover the top rope. Orndorff does the skin-the-cat move and comes back with a series of punches. Outside, again, and Orndorff lifts Studd back into the ring and comes off the top with another cast-shot. Orndoroff picks up Studd for a slam, but Heenan reaches in for the disqualification. To make the fans hapy, Orndorff tees off on Heenan.

In the final studio segment, Gorilla frustrates the Brain by revealing that he's been searching the wrong magazine for pictures of "those big Japanese".

Why'd You Watch This?:
Whoa... no Lanny Poffo?! This screams "filler", since they had to go back a few months to dig up all these pre-WrestleMania 2 matches. But it's not so bad. At least they're acknowledging the time gap and not trying to pass it off as current events. There are enough matches that things move at a steady pace, plus Heenan and Gorilla are developing their chemistry.