Hello again, everybody, it's time for Prime Time Wrestling with Gorilla Monsoon and your host, Bobby "the Brain" Heenan. I thought I was in a good little groove with reviewing these, in a timely manner, but the last episode I sat through absolutely killed my enthusiasm. As a wise man once said: "I like things that don't suck, Beavis".

Heenan's already on the phone...and on hold. Gorilla pesters Heenan that King Tonga, Capt. Lou Albano and Andre the Giant are all on his case. But with so much going on in the World Wrestling Federation, let's get down to ringside for...

Looks like our matches are from the "home field" of Madison Square Garden, with Gorilla and Lord Alfred Hayes on the call. Spivey & Rotundo have matching star-spangled tights, but I don't think they have an official team name, yet. Or if they ever do. I think "US Express", "New US Express" or "American Express" might have been monikers made up by modern fans; like calling Sheik & Volkoff "The Foreign Legion". Spot is tossed around and gets a backdrop from Spivey. Rex tags in, gets a few shots and falls victom to the US Armbar. Spottie returns and bumps like mad for Spivey. Rex tries to sucker Spivey into the corner, but Spivey is TOO TALL for his reach and delivers an atomic drop and a slam. Rotundo comes in with a elbow, allows a tag, then takes Spot to the mat with a headlock. Rex makes the save with a cheap shot forearm and the Dogs finally have their day (*groan*)... or moments. They blow a double-team spot, where it appeared that Rotundo was suposed to flip out to the floor as Spot pulled the top rope down. They alter the script, a bit, and have Rex simply stomp Rotundo to the floor. Rex with a double axe-handle from the second rope for 2. Press-slam onto the ropes gets another 2. Spot eats a Rotundo sunset flip and a flying bodypress, both for a quick count. Rotundo fights over a suplex with Rex, who simply kicks in the tummy. They try again, with Rotundo connecting. "Hot" tag, as Spivey comes in to clean house. Big slam and an elbowdrop on Rex, followed with a small package for 2. Rex lifts Spivey in an awkward belly-to-back spot, as they may have been setting up for a blind tag. Instead, Spivey delivers an atomic drop, then Rotundo comes in to deliver an airplane spin for the 3 count. Basic stuff with two sloppy spots mixed in, so nothing worth watching. Spivey did his usual aimless wandering, at the end, too.

Gorilla's all over the fact that this is two former WWWF/WWF World Champs. Sheik stalls and works the crowd. You might complain about the "U-S-A" chants, but the Puerto Rico/US connection is pretty tight, so it really doesn't matter. Sheik with a side headlock and a shoulderblock off the ropes. Morales slaps Sheik in the tummy, which is enough for Sheik to roll out and stall again. Morales clubs him in the head and tries for a Boston Crab, but Sheik makes the ropes. Greco Roman Eye Boink from Sheik, with plenty of stompin'. Sheik keeps stopping to insult a fan in the second row with a US flag, which gets more of a reaction than his fisticuffs with Morales. Sheik takes Morales to Abdominal Stretch City (bitch), but Morales powers out with a half-assed hiptoss. Morales bumps well as Sheik flings him over the top rope. Sheik cuts off his return, on the apron, and knocks him back down. Morales makes it back in, only to get choked and hooked into the Camel Clutch. Morales makes the ropes, to break. Punchy/kicky time allows Morales to take over. They waltz to the apron, where Morales gets his foot caught in the lower two ropes. Sheik starts stomping, then shoves the referee to trigger a disqualification. Morales gives Sheik a parting shot to end things.

Yeah, Hogan's actually on this show, for once, mixing it up with "Killer Ken". He's straight from "hangin' and bangin' in the gym", then goes over his "hit list", which includes King Kong Bundy, Don Muraco and anybody else he can remember. Then he goes into some weird story about being busted by the cops in Los Angeles and ripping bumpers off of cars. Finally, the WWF Title is "just as important as the Statue of Liberty and the Constiution". He gets a shot at "all those commies and their radiation", too. 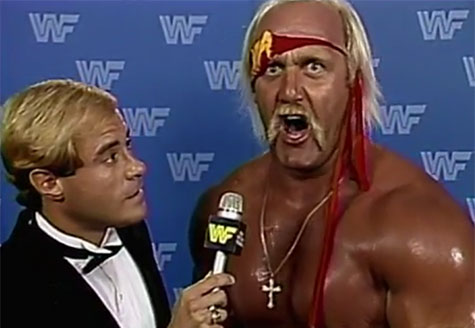 Joined-in-progress with a Slugfest of Abbreviated Importance. "Vintage Littlebrook" as Lang pulls his beard, causing him to whine. Littlebrook gets crotched in the corner ("The Shrub of Woe?" Hey-oh!) and Lane actually lets the ref help him out. Comedy spots, as they run around the ref and take turns biting. Lang gets two nice backdrops, then applies a reverse, rolling/spinning leglock roll-up (!) to get the pin! Yes, I just marked out for a midget match.

In the studio, Heenan's been waiting for a phone call about Andre the Giant's suspension. To find a "team big enough to face Studd & Bundy", "Mean" Gene's on the streets of Tokyo (in a full tux), looking for the Big Machine and the Super Machine. Gene wanders into random street markets, including a record store. He playfully asks for a copy of "The Wrestling Album" and a clerk actually pulls it out! Nobody knows where the Machines are, but this is to be continued...

Wells torques off Hoss and the referee by stealing Hoss' cowboy hat and clowning around with it. That's probably the most charisma I've ever seen out of Wells. They start off slugging and Wells gets the advantage on a shoulderblock exchange... cuz' he's a former football player, y'see. Hoss clubs him out of the ring and suplexes him back in. Stepover toehold from Hoss. Wells keeps going to a standing side headlock as Gorilla and Alfred talk about how he's put on an extra 20 pounds and looks lethargic. They fight over a vertical slam and Wells wins, again. Funk goes up top for ...something... but Wells catches him in mid-air and delivers a side backbreaker. Wells sets up for the ol' 3-point football charge into the corner, but Hoss gets his knee up. Flying cross-body press from Wells gets 2. Wells goes up to the second rope and tries a splash, but Hoss gets both knees up and grabs the pin. Even though the commentary was ragging Wells, Hoss seemed like the one who was more winded.

Basic stuff to remind us that Chico's still chasing "Macho Man" Randy Savage's Intercontinental Championship. Chico complains about all the ways Savage bends the rules and Resnick (inaccurately) piles on by mentioning the 30-day rule, implying he's a closet champion.

In the studio, Gorilla says this is the toughest competition Race has faced in the WWF. Heenan vapidly replies: "Yep. Leaping Lanny Poffo is in the WWF..." Lanny's poem: "As I look across the ring, it's Handsome Harley Race. The pages of his great career are written on his face. With Bobby Heenan at his side, they're reaching for the top! But my name is Leaping Lanny and tonight, you're gonna' flop"! Poffo starts with some headlock takedowns, until Race lifts it into a belly-to-back suplex. Gut-wrench suplex, as well. Piledriver is temporarily blocked as Poffo turns it into a backdrop. Race clubs some more, then hits the full piledriver for 2 (it's doomsday for the skull). Kneedrop and headbutt sends Poffo to the floor... then Race is out to deliver a brainbuster on the floor! Back inside and Race is the St. Louis Suplex Machine, as he performs a belly-to-belly suplex. Diving headbutt from the top! Another headbutt and Poffo eats concrete, again. Race sets up for diving headbutt on the floor... and it actually connects! Poffo crawls back in, eats some more kneedrops, fights back a bit and gets two flying head scissors. But it's not long before Race dumps him on the top rope and ends things with another brainbuster for the 3 count. Really just Race putting on a clinic and Poffo selling like a champ.

In case we've forgotten, Gorilla tells us that George is most unorthodox. George storms the ring during the "Russian National Anthem" and the fans are really into it. Lot of arm-flailing and lots of stalling. Volkoff with a series of kicks and there's an awkward Irish-whip-to-the-corner spot. George takes the cue to rip into the turnbuckle and rakes some of the Lethal Turnbuckle Stuffing into Volkoff's eyes. George does his usual "hidden foreign object" schtick as the merriment continues. Volkoff stomps him into the corner, then clubs him out to the floor. Capt. Lou supplies George with a steel chair, as he instantly clubs Volkoff with it and gets disqualified. Just another day at the (crappy) office for the seemingly eternally winless Steele.

Why'd You Watch This?:
Think I've said this before, but they really didn't have a great roster in the summer of 1986. Yet this episode is a small upgrade from the previous few. No TNT re-runs and they increased the "Star Power" just a little bit. Heenan's animated in the studio, as he's constantly messing around with the desk phone. The Machines are one of my guilty pleasures, so I'm thrilled to see that angle started. Still, once again we get Lanny Poffo and the usual Prime Time Meatballs. So, I don't think I'll ever watch this episode again.