Hello again, everybody, it's time for Prime Time Wrestling with Gorilla Monsoon and your host, Bobby "the Brain" Heenan. They stir the pot about Andre the Giant's supposed suspension, then Heenan offers a wager on tonight's Feature Match-- all of half a buck. But with so much going on in the World Wrestling Federation, let's get down to ringside for...

Our matches are coming from the Boston Garden, with Gorilla and Lord Alfred Hayes on the call, unless otherwise noted. Smarks will be happy to know that Bret gets cheered, while Afi gets booed, during their respective introductions. They lock-up, with Afi powering Bret to the ropes. Bret complains about a hair-pull to stall and aggravate. Bret works a side headlock, turning it into a bulldog whenever Afi tries to escape. Shoulderblock off the ropes, then Bret tries a reverse roll-up. Afi shrugs him off and covers him in split-legged pinning attempt for 2. Bret talks a walk outside. Criss-cross rope action with Afi delivering a crossbody for another 2. Tough to see, but it looks like the second-level marquee actually says: "Bret Hart vs. Superfly Sivi"-- cuz' I think they tried to bill Afi as "Superfly" Sivi Afi a few times. To the ropes, again, as Bret responds with a reverse atomic drop. Nice snapmare, then an elbow drop and a legdrop from Bret. Bret keeps working on Afi, then dumps him out to floor, which finally gets him some boo's. Afi comes back in with a sunset flip for 2. Bret comes right back with a charging clothesline for 2, then a backbreaker for another pair. Bret tries to ram his head into the turnbuckle, which activates the Samoan No-Sell Powers. Afi's all punchy/punchy, BITES, then dishes out a flying headbutt for 2. Bret misses a drop-kick, which allows Afi to go upstairs for the flying bodypress. Bret catches him, rolls over and get the 3 count. Only one step above a squash for the Hitman, as he was in control for about 75% of the match. When Afi did get in some offense, it was rather ordinary.

It just ain't "Prime Time" with Leaping Lanny, huh? Because you care, Poffo's poem: "Jim the Anvil Neidhart has a crewcut and a beard. I'd say he looked like Elmer Fudd, but Elmer's not as weird". That torques Anvil off, so he pummels Poffo into the corner and bites his beak. Anvil thumps him, all over the ring, then tosses him over the top. Poffo skins-the-cat back in, but eats a clothesline. Punchy/choky from Anvil, until Poffo gets a drop-kick, off the ropes. Poffo escapes with a few somersaults and mounts an attack of punches of kicks, the BEARD-PULL and another drop-kick. Slam, then Poffo's second-rope moonsault connects! But only for 2. Poffo slams Anvil and goes up top for a senton splash, but the lake is dry as Anvil rolls away. Anvil is quick off the ropes with an elbowdrop and scores the 3. "Yahahaha! Yeah, baby!" The last minute was fun, but the preceding five kinda' stunk.

They address some of their recent challenges from the Dream Team, Iron Sheik & Nikolai Volkoff (referencing their recent "Saturday Night's Main Event" match), then the Killer Bees and the Hart Foundation. No real panache.

The Junkyard Dog on TNT

JYD brings in his "family", old ladies leading out some dogs. They do amazing tricks like walk, sit and retrieve. The dogs do a few tricks, too (hey-oh). I'm probably spoiled by the modern "dog agility courses" with tunnels, slaloms, teeter-totters, flaming barrels and other stuff. "Mean" Gene, Alfred Hayes and even JYD all crack up as one dog blows his "spot" when he doesn't retrieve. Not an enjoyable segment, as you could tell that JYD had absolutely no previous connection with the dogs or the ladies.

Yes, this is happening. As usual, Sharpe brags the house mic and demands to be introduced as "Canada's Greatest Athlete". Sharpe tries to sucker Garea in for the Penultimate Knucklelock Challenge, but they instantly turn into a nice series of armbars and reversals. Sharpe bails a few times, just to work the crowd. Gorilla gets on Sharpe about how his forearm brace and has the injury has lasted nine years, now. Greco-Roman Eye-gouge allows Sharpe to take over, then they bounce into the corners, with Garea monkeyflipping Sharpe. More armdrags and Sharpe bails, again, teasing a walk out to the dressing room. Sharpe carries the rest of the match and does his usual sell jobs (ie: "yaaaaaaa"). Garea catapults him into the corner and works a headlock. Roll-up off the ropes only gets 2 for Garea. Sharpe takes it to the mat with a head scissors, back up for forearm clubs, then hops on the apron to do a hangman. Sharpe misses a clothesline and Garea comes off the ropes with a flying bodypress for 2.9. Garea reverses a piledriver into a backdrop and hooks a small package for another near-fall.(Slow) Atomic drop, but Sharpe get his foot on the ropes. More brawling and Sharpe does the Andre the Giant caught-in-the-ropes spot. Garea tries to take him to Abdominal Stretch City (bitch), but the road is closed. Garea tries to do a reverse roll-up in the corner, but hits his head on the turnbuckle. Sharpe takes advantage and picks up the 3 count. Yaaaaa! Iron Mike Sharpe won! Lookout, SD Jones!

Arm-wringers to start, then McGhee with a go-behind takedown as Herc makes the ropes. Big charging shoulderblock from Herc, then some headlockin'. They do an extended criss-cross (JUMP! JUMP!) sequence, with McGhee delivering a series of armdrags and two drop-kicks to send Herc to the floor. Y'know spray-paint a quarter of Herc's hair and he'd look like Seth Rollins' big brother. McGhee goes for a side headlock, but Herc belly-to-backs him. Slam on the top rope, then Herc stomps McGhee out to ringside, following him out with a flying forearm. McGhee reverses a suplex, then dishes out a belly-to-belly suplex. McGhee actually connects from the top turnbuckle with a flying kneedrop for 2. Herc quickly reverses an Irish whip and plants McGhee with a backbreaker to get the 3. I'm noticing in these episodes that Herc is definitely more agile and a better worker than his 1988 to 1992 days.

Gorilla bills this as a "surprise" for Heenan. It's from a syndicated show with Vince McMahon and Bruno Sammartino on the call. Heenan announces the special Powerslam Challenge of $15,000. Rick Hunter shocks me a little, as he's announced from Portland and not the SDF-1 (hey oh). Suddenly, King Tonga is in the ring wanting to take the Challenge, but Studd and Heenan tell him to wait his turn. Studd lets Hunter and Powers try to lift him, then he slams both of them and tosses them around the ring. Powers is tossed out, Studd slams Hunter and gets the 3 count. But the fun's not over-- King Tonga storms the ring, chops at Studd then EASILY picks him up, walks around a bit and SLAMS him! Crowd goes wild! Tonga gets the mic and wants his $15,000. Yet Studd wasn't slammed in an official match, so Heenan denies having to pay Tonga anything. Taking a page from the collective book of Skandar Ackbar, Kamala and Kerry Von Erich in 1984.... but I'm pretty sure they also took it from somebody else's book.

Back from the commercial, on the Prime Time set, Heenan is still upset and makes a collect call to the USA Network to complain about the airing of the match. 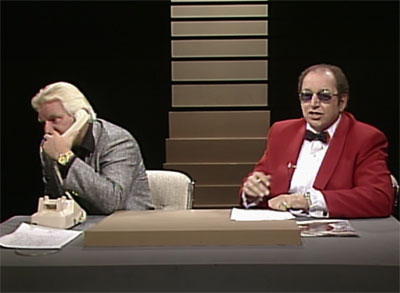 Your guess as to who's officially replacing Dynamite Kid in this. Morales starts with Valentine and they do little more than trade blows. Valentine takes it to the mat with a double-leg takedown, but Morales manages to tag out to Spivey. Backdrop from Spivey gets 2, then Davey Boy's in to work the arm. Faces swap out, all taking turns on the arm. Valentine manages to muscle Davey Boy into the corner as the heels takeover. Beefcake cranks away a headlock...and that's about it. They distract the ref, cut the ring off, and get in the usual cheap shots on Davey Boy. They tag in and out, working Davey Boy's left leg. Elbow from the Hammer gets 2. Davey Boy reverses a piledriver, but Beefcake's in to stomp away and apply a spinning toe hold. headbutt to the groin, then Valentine's in to drop an elbow. Valentine sets up for the figure four, but gets booted into the corner. Valentine alertly stops the "hot tag" by elbowing both Morales and Spivey. Valentine successfully hooks the figure four, but Morales makes the save. There's the "hot tag' as we get Spivey vs. Valiant. Punch x 7, a reverse elbowsmash and a bulldog. 2 count only, as all 6 guys brawl in and around the ring. Morales sneaks up and plants Valiant with a backbreaker. Ref didn't see it, so Spivey is able to make the cover and score the 3. This was really just Davey Boy getting worked over until Morales hit a sloppy backbreaker.

Once more in the studio and Heenan's still holding on the phone for the "President of the USA Network".

Why'd You Watch This?:
Crap, I should just watch the corresponding TNT episodes, as those are only one hour, have slightly better energy and seem to be MORE IMPORTANT than what's happening on Prime Time. The "feature match" had some energy, but only when compared to the rest of this shlop. It's hard to find any real signs of life in this episode. Things warm up once Heenan gets on the phone, as that particular prop would go on to have a long history on the show. Makes me wonder when the "banana phone" comes along. The Tonga/Studd segment was kinda' cool and unexpected at the time, but I don't think they went anywhere with it. Tonga soon became "Haku" and Studd was feuding with the Machines. So mark this as the fourth consecutive episode of Prime Time that I do not recommend.