Pretty sure you know how this works. I watch an episode of World Class, make some stupid comments, and you read it. We start off this episode with another disclaimer that this is in the "most complete form possible, due to original production technical difficulties". I'm just curious if that refers to the editting that's done on the ring entrances (with Skynyrd's "Freebird" and other licensed stuff)? But with so much going on in World Class Championship Wrestling, let's get down to ringside for...

Just in case you didn't feel like tuning in (or reading) the show from two weeks ago. Y'know, I will say that at least when World Class does the "encore" treatment, it's usually a significant match and not just something they're dusting off to fill time (looking at YOU, 1986 Prime Time Wrestling). Oh, and the result of this match is still the same, in case you were wondering. Yet here's something new, that I missed last time: some kids with their own homemade "I Love the Von Erichs" shirts...right next to Moose from "You Can't Do That on Television" (or maybe Delta Burke)! 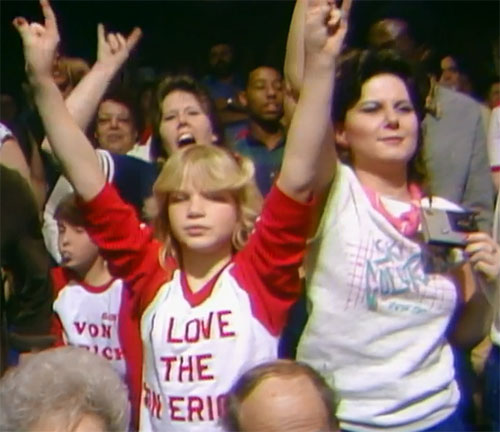 Pre-recorded spot of Kevin visiting the Dallas Society for Crippled Children and dishing out hugs. Just a happy lil' segment.

Chicks dig Chic. Roberts ducks under Roberts' legs during a tie-up and dishes out two harm-drags to send Roberts to the outside (and work the crowd, naturally). Roberts wants to sucker in Donovan with the Penultimate Knucklelock Challenge, but Donovan easily overpowers him. They try to break it with a monkey-flip, but it's quite awkward. Headlock takeover from Roberts is immediately countered with a head scissors. Roberts gets a hair-pull, then works the left leg with a step-over toe-hold. Roberts twists him over and adds a trunk-pull to score a 2 count. The tactics eventually backfire and Donovan smacka Roberts' leg around the ringpost. Donovan then drags him back in to the ring and works the leg for awhile. Roberts sneaks in a closed fit and rakes Donovan's eyes on the ropes. Roberts gingerly walks the rsecond rope (definitely not Gran Metalik) and drops an elbow. Clothesline for 2 and Roberts tosses him out...as ring announcer Marc Lowrance mentions that we have less than a minute. Donovan makes it in with 15 second left and delivers a backdrop. Donovan with a kneelift...and the bell sounds for a time-limit draw. Announced as a 10 minute draw; but only about a minute less .This match was a little weird, because I thought Roberts would finally get a pinfall win over somebody.

Fans immediately chant: "We want Sunshine". I just now realized that Precious and David St. Hubbins have the same hairstyle. Garvin stalls, works the crowd and take it to the mat with a waistlock. Couple of sit-out/spin-out counters from Mike, then he hops back up to deliver two drop-kicks. They do a hammerlock sequence, which Garvin counters with a fireman's carry, but Mike's quick with a head scissors. To the ropes and Mike with a high-cross body for 2. They fight over a wristlock and Garvin cheats with a hair-pull. Garvin gets ONE whip to the corner, then Mike responds with a backdrop, drop-kick, two armdrags, slam and a kneedrop. Crowd goes bananas, as Chris Adams struts to the ring, wearing Garvin's ring jacket and mocking him. Cameras miss something, as Mike is chucked over the top rope, drawing a disqualification. Mike was made to look like a Big Deal, once again. At least we got the following awesome shot of a ringside fan heckling Garvin and Precious... with a bloody doll?! 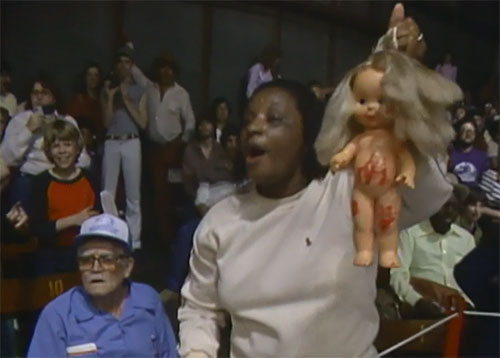 Glad to see this angle finally on the "main" World Class show! It's heel vs. heel and I think this was set-up after some 6-man Tag Team Heel Miscommunication on the Fort Worth telecasts. Right after the introductions, it's ON, as we get an animated brawl! Order is somewhat restored, as Hayes whips Link in for a reverse elbow. Link no-sells a turnbuckle shot and floors Hayes with a headbutt. Kamala likes that idea, and comes in to deliver his own headbutt. Link tries a reverse atomic drop, but Hayes blocks it and delivers his own. Gordy's out of position to make the tag, so Devastation, Inc. cuts the ring off and works on Hayes. Pretty good job of "Face-in-Peril" from Hayes..and the fans are into it! In a weird reversal of the usual, they start chanting "Go, Michael, go"! Link misses a diving headbutt from the second rope and we finally get the Hot Tag to Gordy. Gordy cleans house and boots Link out of the ring. Link holds down Hayes for a splash from Kamala... but Hayes squirms out and Link gets splashed, instead! Gordy flies off the second rope with a meathook clothesline on Kamala for 2. Gordy signals for the Oriental Spike, but Skandar Akbar runs in for the disqualification. Friday also enters the ring and isn't long before Buddy Roberts and the Super Destroyers both run in to help their respective factions. Kelly Kiniski runs in to attack a Super-D because....? Finally, Mike and Kerry Von Erich run in. The ring is cleared and the only ones left standing are the Von Erichs and the Freebirds! They have a staredown, but the Freebirds appear to leave peacefully. Von Erichs are suckers and as they bend through the ropes, the Freebirds attack! Kerry and Mike eventually clear the ring. Again, the fans are loving this! This is the definition of a "Wild Main Even Brawl" and I absolutely loved it.

Bill Mercer wraps it up at ringside, per usual. This will not be the end of the Freebirds/Devastation riff, as next week the 'Birds will put their 6-man Tag Team Championship on the line against Kamala, The Missing Link and Super Destroyer #2!

Why'd You Watch This?:
Discounting the "encore match", the only thing worth skipping is the Donovan/Roberts match. I'm over the whole Garvin/Adams thing, but I definitely want more Von Erichs/Freebirds/Devasation stuff. Regardless of my personal observations, this episode has a great energy and is another example of "Prime WCCW".