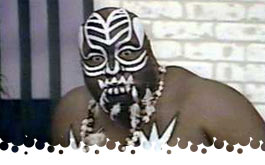 -Picked this episode by random, but not really. It just happened to pop-up on the "Recently Added" section of WWE Network and is something I've never watched. Opening video montage has a close-up of Kamala's belly-slapping antics! Plus brief appearances by "Rowdy" Roddy Piper and Damien DeMento. We're in Tucson, Arizona, with our hosts Vince McMahon, "Macho Man" Randy Savage & Jerry "The King" Lawler. They hype the upcoming WWF Championship rematch between Hulk Hogan and Yokozuna at the new King of the Ring event. Savage cuts things off, as he wishes a "Happy Mother's Day to my mom-- from your Macho Baby, oh yeah, dig it". Well, I'm already glad I'm watching this! But with so much going on in the World Wrestling Federation, let's get down to ringside for...

Without digging too deep, this seems like a random match-up, to me. Although the Nasties and Money, Inc. had a feud in the fall of 1992, so maybe there's some residual storyline carryover? With his suspenders, white shirt and dress slacks, Mr. Hughes looks like a natural to be teaming with the tag champs, Ted DiBiase and Irwin R. Schyster. The Nasties and Kamala each get their own entrances. Slick even instructs Kamala on how to be friendly and shake hands with the Nasties. Hughes has a heat-less face-off with Kamala, then immediately tags in DiBiase. The Million Dollar Man offers a load of cash for Kamala to walk away....so Kamala grabs the cash and gives it to Slick. Kamala then tosses DiBiase around the ring and tags in Brian Knobbs. McMahon has some timely kayfabe commentary, as he mentions Slick will put the money in his church's collection plate, this Sunday. Knobbs and DiBiase trade blows, until DiBiase catches him with a knee to the gut. IRS is in, but also gets tossed around, the shoved into the "pit stop" of Jerry Saggs. Both sides tag off and we get a showdown between Kamala and Hughes. Hughes no-sells Kamala's shoulder-blocks, but finally goes down after a third charge. McMahon actually calls him "Curtis Hughes" as he hits a big boot to Knobbs. Knobbs blocks a DiBiase back-drop with a face-jam and both guys are down. "Hot" tag to Saggs, who delivers a piledriver on IRS for 2. Hughes makes the save and all 6 guys enter the ring for a brawl. Nasties whip IRS in for Kamala thrust-kick and a big splash. Yet Kamala can't figure out how to roll him over for the pin. He rolls him over, twice, but IRS is still on his back, as Slick, the Nasties and even the fans all yell: "roll him over". Kamala ducks through the ropes to talk to Slick, which allows IRS to sneak up from behind and rolls him up for the pin. Just a buncha' punchy/kicky stuff (especially from the heels, who had no mentionable offense) but mildly entertaining midcard fluff. This may have been one of the last syndicated WWF TV appearances for both Kamala and the Nasty Boys.

Video feeds of each guy, moderated by "Mean" Gene Okerlund. Michaels, the reigning Intercontinental Champ, justifies his backstage attack on Mr. Perfect at WrestleMania IX. Michaels claims that he was trying to save (his) "good friend, Lex Luger" from Perfect's attack. Your basic "I'm gonna' getcha' when we get in the ring" stuff. Gene really added a lot of emotion to his moderation, though.

- Vignette for the Smoking Gunns, who are coming to the WWF, soon. They're walking through cacti and shooting pistols. So, I guess they have the potential to flat-out murder their opponents.

Easy joke: I want Dakota to team-up with George South, so we can get the tag-team of "South/Dakota". McMahon takes a shot at Yokozuna for being "the shortest reigning WWF Champion". As expected, there's not much competition as 'Zuna easily slams Dakota, then plants a big leg-drop and a belly-to-belly suplex. Avalanche in the corner, followed by the Banzai Drop and the 3 count is elementary. -Promotional considertaion paid for by the following: ICO-PRO (as Tatanka tells us: "You've Gotta' Want it!") and..."Chips? Snap into a Slim Jim! Ohh yeah!"

King of the Ring Report with "Mean" Gene Okerlund. Promos from Yokozuna & Mr. Fuji. For the actual tournament, bracketing and qualifying is currently underway, and we have two guys who are already in: Bret "Hitman" Hart & "The Narcissist" Lex Luger. Luger's annoyed that he had to qualify, but plans to get to the finals and face Hart. Two more qualifiers are coming up: "Hacksaw" Jim Duggan vs. Papa Shango (on Wrestling Challenge) and Typhoon vs. Bam Bam Bigelow (on Monday Night RAW.

Vega's probably in his 40's and looks like he's been around. More relevant kayfabe commentary as McMahon asks Savage about his good friend, Crush, and how they've been hanging out in Hawai'i. Crush no-sells some shots from Vega, then hits a spinning back-kick. Belly-to-belly suplex, overhead press-slam, and the Crush Compactor (head squeeze) and the match is over.

"Update" with Gorilla Monsoon. I'm old-fashioned, so it seems odd to have Gorilla doing this. He recounts WrestleMania IX, when Luna Vachon appeared and attacked Sensational Sherri. We get some exclusive backstage footage, where Luna continued attacking Sherri. Up next is Luna's first speaking promo from Monday Night RAW on April 12. I can't believe I didn't notice this, back in the day, but with Luna's gravelly voice and outfits, she was probably going for a Wendy O. Williams (from the Plasmatics) look. Give the lady a guitar to chainsaw, goshdarnit!

Santana starts with a waist lock into the corner, then Ramon smacks him with a back elbow. More "Hammering Away" from Ramon, then Chico bounces off the rops and connects with the flying forearm! DO we have a upset?! 1... 2... foot on the ropes! Chico blocks a kick and works an arm-wringer. Ramon turns the tables with a stun-gun on the top rope, then goes into "Hammering Away", but Chico is game with a another flying forearm, slam, then comes off the top with a flying crossbody. Ramon catches him, rolls through, and hooks the tights to steal the pin. Maybe 3 minutes, top. Again, the bad guy did absolutely nothing aside from punchy/kicky, but he won.

"Mean" Gene calls out Doink for "not being a nice guy". Doink calls Crush a "pineapple head" and gloats about his victory at WrestleMania IX. Then we cut to Hacksaw, who's all pumped for the King of the Ring. Gene resets Hacksaw's issues with Yokozuna and getting squashed a few months ago. Hacksaw's out for revenge, but this is sort of a one-sided feud, as Yokozuna and Mr. Fuji were cutting promos aimed at Hulk Hogan, earlier.

Gonsales appears to be a legit 2-3 feet taller than both guys, in an impressive visual. The Undertaker is mentioned, but they're mostly focussed on next week's King of the Ring qualifier against Tatanka. Gonzales closing things by saying "goodbye, Indian". Yes, I just transcribed an enire Giant Gonzales promo. You're welcome.

McMahon quickly signs off and promotes next week's Gonzales/Tatanka match...and we close with the official stamp of "100% WWF U.S. Grade-A Prime Beef". Oh golly...I could've gone longer without remembering that.

Why'd You Watch This?:
Since this was early May, it was probably a "Sweeps Week" episode, so they trotted out two "feature matches". Nobody expected Santana to win, but the match was still a disappointment due to its sub-3 minute length. Kamala & Friends vs. Money, Inc & Friend wasn't anything special, but I'd still rather watch a random 6-man contest, over two jobber squashes.

Still, this wasn't as bad as I expected. The 40 minutes just flew by and there weren't any slow spots. If anything, I would've trimmed the Luna/Sherri segment a bit, but Luna was still new to the WWF audience, so it's understandable. They also made King of the Ring sound like a big deal-- not the after-thought it became in later years.

back to WWF Superstars Index