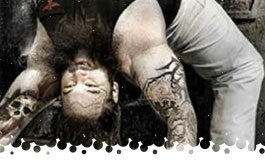 - I’m typing this on Friday afternoon/evening, so a quick R.I.P to George "The Animal Steele, who passed away in the late hours of February 16th. While not a fan of his in-ring work, he had the memorable feud with Randy Savage over Miss Elizabeth, a Beauty-and-the-Beast storyline that made a once hated villain into a beloved fan favorite. Don’t forget about Mine, and those TNT sketches with a therapist who gave him shock therapy.

- Bray Wyatt comes out to open the show. He’s not lying when he says he knew this day would come, and he now holds the whole (damn) world in his hand. John Cena comes out to interrupt the festivities. The crowd greets him with the usual and shower Wyatt with more "you deserve it" chants. Cena says nobody "deserves" anything, they earn it. Wyatt doesn’t hold the world in his hands, the entire world is looking at the target (the WWE Title) on his shoulder. Cena says we don’t waste any time and get business started right now. That brings out A.J. Styles, who is still owed a rematch from losing at the Royal Rumble. He may get around, line-jumping at grocery stores and airports, but that’s not going to work here. Daniel Bryan comes out to address the situation. To make a long story short (too late), we’re going to have a Triple Threat Match, with Bray Wyatt defending the WWE Title against both John Cena and A.J. Styles in tonight’s Main Event.

American Alpha vs. The Ascension:

(Chad Gable & Jason Jordan vs. Viktor & Konnor)
Non-Title Match. American Alpha defeated the Ascension in the last leg of the Tag Team Turmoil, so it makes sense that this is only a non-title situation. Gable and Viktor start. Gable picks the leg and covers for an early pin attempt. Viktor counters a waist-lock with a wrist-lock. Gable rolls through to counter with a leg pick and covers, again. They go through a series of counters until Gable grabs a waist-lock for a takedown. Viktor takes a cheap shot at Jordan, leading to a quick brawl in the ring. The Champs get dumped, but they climb the same turnbuckle and comes back in with diving clotheslines to clear the ring as we take a break.

We return with Viktor in control of a chin-lock. During the break, Gable was hung across the top rope to turn the tide in the Ascension’s favor. Gable tries to fight free, but Viktor sends him into the corner chest-first for a two count. Konnor with a shoulder tackle and Viktor with a jumping high knee for two. Gable catches Konnor with a hanging arm-breaker, but Viktor cuts off the tag attempt. Jordan gets the hot tag anyway, and goes wild on both opponents with over-head belly-to-belly suplexes. Konnor saves Viktor from the charging shoulder tackle. Double-team slam to Jordan gets two. Action breaks down again, and a sudden Grand Amplitude finishes at 6:13 (shown). Post-match, the Usos show-up... on the video screen, to talk trash and set themselves up as American Alpha’s next challengers. Well, I guess we need real closure to that angle that was seemingly abandoned shortly before Survivor Series. *1/2 This was OK, but had a rushed finish.

- James Ellsworth is trying to get some action from Carmella, unsuccessfully. Ambrose walks by and informs him that Carmella is using him and should try online dating. Carmella demands he stand up for her, and here’s Daniel Bryan to rectify the situation: Dean Ambrose vs. James Ellsworth, tonight.

- Teddy Long joins Kurt Angle and the Rock n’ Roll Express as announced inductees for the 2017 Hall of Fame.

- James Ellsworth comes out for his match with Dean Ambrose, but luck seems to stick on his side, as we find out that Baron Corbin has made his presence felt, as he drags Ambrose from backstage, slightly beaten, but definitely not bloody. Ambrose avoids End of Days on the concrete and starts fighting back. Is comeback is short-lived, as he takes a Deep Six onto production equipment, setting off some special-effect sparks that WWE is infatuated with doing.

- We recap the backstage brawl between Nikki Bella and Natalya, resulting in some powder being thrown all over Maryse. Daniel Bryan chews out Nikki as if he were a fan-friendly Principal. Natalya shows up to suggest Nikki will be rewarded with an undeserved title opportunity. Daniel Bryan finally settles things by announcing a Falls Count Anywhere Match for NEXT WEEK.

- Renee Young is backstage with Dolph Ziggler. He’s recently gotten the label of "sore loser." He tries to spin that into a pun to explain Kalisto and Apollo Crews’ physical conditions. He sent a message to all the young, new crop of Superstars who think they’re going to replace him. This heel turn is pretty bad. I’m begging for more "Dolph loses to the Miz because of shenanigans."

It’s an Elimination Chamber Rematch, so you know this means Mickie James is getting the win back for jobbing at the PPV. Lockup and Mickie quickly goes to work on the arm and cradles Becky for a one count. Becky with a waist-lock takedown into a front face-lock. Becky with a bridging hammer-lock, but doesn’t hang onto it for long. Becky blocks a kick and rolls over into a cover for two. She goes for the arm, but Mickie goes to the ropes. Becky blocks another kick and rolls Mickie up for two. Back slide for another two count. Mickie rolls to the floor after a couple of shoves. Back inside, Mickie with a knee to the midsection and forearm across the back of the neck. Becky comes back with an uppercut and arm drags. Whip to the corner and Becky sends Mickie to the floor with a springboard side-kick. She follows, but a double clothesline lays them both out.

We return from a break, with Mickie in control of a chin-lock. Mickie with a hair-pull slam for a near fall. Lynch comes back with clotheslines and a leg lariat. Exploder Suplex gets two. Mickie blocks another suplex and goes for the arm, but Becky counters with a roll up for two. Mickie quickly responds with a flapjack. She ascends the ropes, but Becky avoids the dive and throws her with another Exploder for a near fall. Mickie avoids the diving forearm. Becky blocks the turnbuckle hurricanrana and dumps Mickie to the floor. Mickie sells like she’s injured, but Becky throws her back in the ring. The referee steps between them, and you should know the finish. Mickie is faking it, and uses the distraction and gullible referee to nail Becky from out of nowhere with the Mick Kick for three at 9:10 (shown). *** No better than their match at Elimination Chamber, but not much worse, either. Good TV match. You’d think referees wouldn’t allow such heinous behavior, but this is professional sports entertainment.

- WWE, Bill Simmons, and HBO are teaming up for a documentary on Andre the Giant. Should be interesting to see how much is kayfabe and how much treats it as a serious documentary.

- Renee Young is in the ring with NEW Women’s Champion, Naomi. I doubt she’s making it to WrestleMania as the Champion. She claims she suffered an injury at the Elimination Chamber, which means she won’t defend the Women’s Title against former Champion, Alexa Bliss, until NEXT WEEK on Smackdown Live. You’d think putting the belt on the 3rd-string babyface wouldn’t be the booking choice of logic, but you could argue everyone is on equal ground. Alexa Bliss comes out to call Naomi out for faking an injury to avoid defending the title tonight. Next week, Naomi can either forfeit and hand the title over, or get smacked around the entire arena.

Main Event of the Night. Really light week for wrestling, but there’s just under half-an-hour left, so maybe after introductions, this will get a decent amount of time. Bray Wyatt blows out his lantern to stand in the presence of Luke Harper, who attacks Wyatt with rights and lays him out with a Super-Kick before being removed from ringside. The match begins during the break. We join in with Styles missing a knee drop. Cena comes off the ropes with shoulder tackles, followed by the back suplex. He goes for the 5-Knuckle Shuffle, but Wyatt trips him up and sends him into the steps. Styles greets Wyatt with a springboard forearm. The easily pleased crowd chants "this is awesome." Styles kicks away at Wyatt before heading back in the ring. Styles with another kick and diving forearm for two. Wyatt comes back with a hard body tackle and tosses Styles to the floor. Cena is back in, with more shoulder tackles and another back suplex. This time, the 5-Knuckle Shuffle connects. Wyatt slips out of the AA, and Sister Abigail is interrupted with a Phenomenal Forearm. Cena with the AA to Styles for a near fall. Wyatt pops up and hits Cena with Sister Abigail, but Styles interrupts the count.

We return from our last commercial break, with Styles splashing Wyatt across the announcers table. He goes up again and drops a guillotine leg, breaking the table this time. Cena counters the Phenomenal Forearm and hits an AA. He rolls through to do it again, but Styles counters that into the Calf-Crusher! Cena escapes and locks in the STF. Wyatt breaks that up with a running senton. Wyatt tosses Styles to the floor. Cena surprises him with the AA, but Wyatt kicks out at two. Styles wakes up and hits Cena with the Styles Clash for another two count. Styles gets hung up across the top rope trying the Phenomenal Forearm. Cena turns around, walks into Sister Abigail, and Wyatt retains at 10:47 (shown). Damn, Cena keeps doing pin fall jobs. I’m shocked. ***1/4 It’s the usual abridged version of a PPV Main Event crammed into half-the-time. It’s good for TV, but leaves you wanting more.

- Post-match, Randy Orton finally makes an appearance, and announces he WON’T challenge Bray Wyatt for the WWE Championship at WrestleMania. ZUH!? Later in the night on Talking Smack, Daniel Bryan announced a #1 Contender’s Battle Royal for NEXT WEEK to determine a challenger for Wyatt’s Championship at the Super Bowl of Wrestling.

Final Thoughts: Based on what was presented tonight, we’re moving forward with a possible three-way feud with Wyatt, Orton and Harper. John Cena doesn’t have much direction, but based on Talking Smack, it sounds like they’re planting the seeds for Styles vs... (sign) Shane McMahon. Dean Ambrose is on a collision course with Baron Corbin over the Intercontinental Title, and American Alpha and the Usos are rekindling their rivalry, this time with the Tag Titles at stake. The Women’s roster looks to be shaken up soon, with Nikki and Natalya hopefully blowing off their angle on next week’s episode. Not a lot of wrestling, but what we got was acceptable. Some people still seem without direction (where was Miz?!) or are flopping in their current role (Dolph), but there was enough decent stuff to keep things interesting.