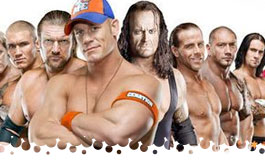 Last time in our re-visiting of the Royal Rumble, we took a look at each Rumble from 2000 through 2005, and it was like comparing night and day with what we suffered through in Part 2. 2004 might be the best Royal Rumble Match of all-time (arguably, of course), 2001 isn’t too shabby, and the weakest of the batch were still pretty good compared to the Mid-Late 90’s. This time around, we kick things off with the year 2006 and I’m going to be honest... from 2008 through 2011, I fell completely out of love with wrestling and don’t have as much knowledge of the product for those years, so apologies in advance if there’s anything I miss or incorrectly identify....

Rumble Match Rating: The first half of the Rumble I have very little to complain about. With the exception of booking the top heel like a babyface, there were some decent sequences, the obvious dead-weight of the match was dealt with in timely fashion, and there was decent star power. Then the second half just fell apart, with too much cluttering in the ring, and the "story of the match" just laying around like a defenseless slug. I know its easy to hate on the match just for the "Doing it for Eddie" angle, but the actual performances and booking of the match really hits the skids and doesn’t recover enough to make it a good Rumble. [**1/2]

Rumble Match Rating: A change of pace from the usual complaints, as the match suffered from too much clutter early and often, but then the last 15-minutes really kicked ass, with the Great Khali clearing the ring of more than half the remaining field, Undertaker coming in to take care of him, the sequences with Rated RKO vs. Undertaker and Shawn Michaels, and finally the final sequence between the Undertaker and Michaels. If not for the last 10-15 minutes, this is definitely one of the weakest Rumbles. With it, it holds up well enough to not give a thumbs down. [***1/4]

Rumble Match Rating: Another example of starting the match on the right foot and ending it strong, but having a whole lot of nothing in the middle. When some of the "highlights" of the middle section of the match is a battle of 60 year olds in Snuka and Piper and Shelton Benjamin being thrown out in about 15-seconds, there’s obviously not a whole lot of meat to it. Still, Taker vs. Michaels was a good match-long little story, even if the crowded ring hurt things more than it helped, and everything from Triple H’s entrance and onward (including Cena’s surprise return) is some good stuff. [***]

Rumble Match Rating: Long and dull. I don’t even have much to say to bad-mouth it, since it wasn’t a booking disaster like 1999. There’s too many guys in the ring for almost the entire match, with a ridiculous amount of people spending extended lengths of time in there doing nothing. One of the easiest things to book for this Rumble is the dominance of Legacy, and they didn’t even do that! The only memorable moment from this Rumble was Santino’s breaking of an infamous record. [*1/2]

Rumble Match Rating: Great Rumble from start to finish. We got off on a good note with CM Punk dominating the field of weak participants and doing something that seemed fresh. There was a short sequence of filling the ring, but that was quickly justified when Shawn Michaels cleared the ring out almost single-handedly, culminating in a surprise elimination of his best friend and co-holder of the Tag Titles, Triple H. From there it was Cena and Shawn dominating the ring, a quick Battle of the Bulge, the heart-breaking elimination of Shawn Michaels, and the surprise return and victory for Edge. This might’ve been the last great Rumble Match. [****1/2]

Final Thoughts: You can definitely see a lot of inconsistent effort and performances in this batch of Rumbles. 2006 will forever leave a sour taste in everyone’s mouth with the exploitation of Eddie Guerrero’s name, and that’s not taking into account that the actual work in the match was really weak. 2007 and 2008 started and finished strong, but suffered from over-crowded middle portions. 2009 completely went off the tracks, giving us very little worth remembering and was just a bunch of guys doing the lazy lean for half-an-hour. We ended the stretch with the best Royal Rumble since 2005, a strong performance both creatively and from the talent in the match, complete with another chapter in the HBK/Undertaker chapter and the big surprise finish with Edge. We will conclude our trip down the Rumble Memory Lane™ with 2011-2015... this is going to be rough.