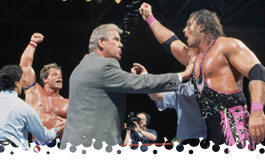 Last time we started where it all began, a USA Network special that went opposite a poorly planned Crockett PPV, and carried our way through the end of the Hulkamania era, ending with the 1993 Rumble, the first to feature the prize of a guaranteed Championship Match at WrestleMania for the winner, and also the first in a long string of mediocre and/or poor Rumbles. We pick things up in 1994, the dawn of the "New Generation", and work our way through the rest of the 90’s...

Rumble Match Rating: The trend of lackluster Rumble matches continues. You had the memorable sequence with Diesel dominating the ring (and becoming a traditional spot in Rumbles going forward), Bret Hart’s "improbable" return from injury, and the double finish, but other than that, it was nothing to really get too hyped about. The biggest problem is the lazy way the ring just fills up in the second half, with 13 people still in the ring for the finale. Did Sparky Plugg need to be in the ring for 20 minutes, only to be eliminated nonchalantly? Or how about Mo? Greg Valentine and Rick Martel get extended ring time for being washed up acts, and in Valentine’s case, a one-time appearance (not counting his masked role at Survivor Series ’93) I’m not saying the last half is entirely void of interesting match-ups and eliminations (Jannetty vs. Michaels), but there’s so little mixed in that it gets lost in a sea of nothingness. **3/4

Rumble Match Rating: If not for the "Shawn Michaels and British Bulldog start and finish" storyline, this Rumble has almost nothing else going for it. The minor sequences with Mabel/Bundy and Bret Hart going out for revenge on Owen and Backlund can only go so far, and you could say the latter hurt the match more than it hurt, by taking out two of the three only credible heels in the match. The reduced run time definitely helped keep the pace going, but even that didn’t stop the last few minutes of ring clutter from being a complete snooze. **

Rumble Match Rating: Things keep getting worse for what used to be the most exciting "60 minutes" in the WWF. We can ignore the lack of roster depth, but even WWF guys who were in this thing were mostly met with indifference and shrugs from the crowd. I can honestly count all the "over" talent and fall well short of double digits: Michaels, Diesel, Jake Roberts (nostalgia pop), Owen Hart, Yokozuna, and Vader. We got a few cute spots early, like the slop thrown at Lawler and Roberts scaring everyone off with Damien, but the action was dull. Vader worked over a handful of outsiders and wasn’t overly impressive. Michaels and Owen had a few decent exchanges, and we got the expected meeting of ex-partners with Michaels and Jannetty, but the total amount of positive is far outweighed by a sluggish mess, with bad commentary, and a mostly bored crowd. **

Rumble Match Rating: Another weak Royal Rumble, but a bit better than expected. The roster is decimated, obviously, but they do as much as they can to work around that by having Austin dominate the majority of the match up until the #21 entrant, including sequences with former rivals Savio Vega and Jake Roberts. The last 15 minutes or so is well done with a great collection of top of the card talent, but the poor finish hurts, as well as three separate incidents of someone eliminating himself, the most ridiculous being Mil Mascaras, who was pushing 60 and definitely didn’t need protection. **1/2

Rumble Match Rating: The Steve Austin Show continues, and it’s not as memorable as a performance because of the lack of doubt in who would walk away the winner. There were a few decent spots, but this was mostly a half-hearted Rumble. The lack of depth for believable winners, keeping all 5 Nation members in the ring without doing much damage, the idea of having someone clearing the ring but only letting eliminations come few and far between... It’s unfair to call this "bad", but it was definitely uninspired. **

Rumble Match Rating: The absolute WORST Royal Rumble Match in history. There’s almost nothing positive to say about this. You give us Austin vs. McMahon to start things off, have them leave the ring for most of the match, and then come back in whenever they feel like because suddenly it’s allowed. The lack of Main Event depth means there’s no one who could logically win this besides Austin (SWERVE! McMahon won). A total lack of interesting programs, meaning most of the action was aimless time killing. Two incidents where there’s NOBODY in the ring, which means when someone enters, he just stands around for 90 seconds of dead time. Did I mention the awful swerve? The stuff with the Undertaker’s Ministry kidnapping Mabel? [DUD]

Final Thoughts: Wow, that was a tough series of Rumbles to get through, progressively getting worse until we hit rock bottom in 1999 under the guidance of Vince Russo. Thankfully the turn of the new Millennium would also bring the return of quality Royal Rumbles, but that is for another time. Of all the Rumbles from this period, it’s almost unbelievable I’d recommend it, but I’d have to say the 1995 Rumble is the only one that really stands out. 1994 almost got my pick, but damn did that match fall under the "lazy" files. Until next time...