Hello everyone and welcome. It's Gorilla Monsoon and Bobby "The Brain" Heenan, who actually doesn't announce himself as the host, this week!. I'm thinking Prime Time was bumped for a special event on USA Network on September 1, 1986, so we're still on a consecutive viewing track. Gorilla runs down tonight's card, but Heenan doesn't give a darn, because he's only concerned about "Mr. Wonderful" Paul Orndorff appearing on the show, tonight. But with so much going on in the World Wrestling Federation, let's get down to ringside for...

Joined-in-Progress from Madison Square Garden with Gorilla Monsoon and Lord Alfred Hayes on the call. Hey...this seems familiar to me. Why golly, it's from the August 26, 1986 Madison Sqaure Garden show that I recapped a few years ago. I'm a little amazed that I can remember writing about a SIVI AFI match from that long ago. Anyways, here comes Dr. Cuttenpayst:

Afi goes for a roll-up, but Jake grabs the rope. Just as Jake points to his head in the universal "ain't I smart" move, Afi chops him, lands a dropkick, then bounces off the ropes with a high cross-body for 2. Afi goes back to the arm, settling into a reverse chinlock. Jake drops to the mat to break, hits his kneelift, then drops several shots to the abs for a 1 count. Jake whips Afi to the ropes for a shitty clothesline, then works the crowd a bit. Jake hits a reverse atomic drop, but his casual cover is countered by Avi into a 2 count. Jake slows it down with his own reverse chinlock, as Afi's arm drops 2.5 times. Afi fights back to a vertical base, but Jake kicks him in the tummy and tosses him out between the ropes. Afi ties a sunset flip on his way back in, but Jake grabs the top rope. Jake hooks a sleeper and pulls Afi's tights to bring it to the mat. Jake mugs for the camera to also work the TV audience. Afi pokes Jake's peepers to break the hold, but Jake then tries to smash him into the turnbuckle. Afi, being a Samoan has the Mandatory HARD HEAD and no-sells! Jake responds quickly with a slam, then misses a reverse diving elbow drop from the second rope. Afi chops, dances and headbutts Jake out of the ring. Afi chases him out, headbutts him again and throws the Snake back in. Jake is prone in the middle of the ring, so Afi goes up top for the Superfly...errrr, Afi-Fly Splash. Jake gets his KNEES up to screw with Afi's plans. Jake prowls around and hits the DDT! Jake lays on his back as he covers Afi for the easy 3 count. Match had good heat and was much better than I expected. Can't believe I actually enjoyed a Sivi Afi match!

In the studio they plug the latest edition of the WWF Magazine, which features the Lovely Elizabeth on the cover...along with a special interview with Bobby "The Brain" Heenan!

"Mean" Gene Okerlund is on location at Randy Savage's 17 acre estate. Savage is working out, poolside, then sits down to converse with Gene. Savage claims he has everything he wants, except for one thing-- the WWF World Heavyewight Championship. "I like to hang around the right kind of people and who can be better than myself?" Gene tries to ask Liz about her tennis and golf game, but Savage soon cuts them off. Suddenly, Liz fields a call from a "National Women's Publication", who are offering Savage half-a-million bucks to pose for their centerfold ("more than they offered Burt Reynolds")! Savage claims that Macho Madness is more seductive than sex and hangs up. Next up, Savage turns down a call from a Japanese promoter. An obssessed female stalker then tries swimming across the pool to meet Savage. Pretty fun segment that sums up Macho Man's character. I think this clip was included in some "Macho Man Spotlight" packages for the next few years. 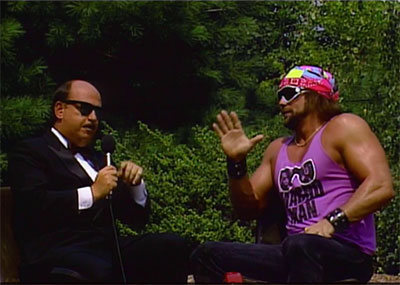 Orndorff is furious at Gorilla Monsoon, for hanging up on him, last week! Orndorff threatens that he'll deliver a piledriver to Gorilla, just like he did to Hulk Hogan. Kinda' funny how the phone antics are carrying over.

Back to MSG and more Dr. Cuttenpayst. Herc has his "dual managers" out, but Blassie departs after the introductions are over. Gorilla queries where Slick got the cash to become a manager and alludes to a possible association with "ladies of the evening". Good thing Mean Gene wasn't on hand. The initials lock-ups result in a stalemate, so they criss-cross (jump-jump) the ropes. Haynes leapfrogs over Herc, but then gets plastered with a sick clothesline. Herc press-slams him and throws him into the corner. Haynes rebounds and applies his own, BIGGER, press-slam. They go nose-to-nose, until Haynes lands an atomic drop, 2 drop-kicks and a snapmare into a reverse chinlock. During the resthold, Gorilla talks about Haynes lives a clean lifestyle with no drugs, partying or alcohol. Yet he has tattoos and long hair... so was Haynes the original "straight-edge" wrestler?! Herc goes for a vertical suplex, but Haynes hangs on and both guys hit their external occipital protuberances (thank you, Gino). They end up outside where Herc jabs Haynes with a chair to the jaw. Back in, Herc works the lower back and a Bearhug happens. Haynes claps the ears to break and a brawl ensues. Herc gets a reverse atomic drop and a suplex for 2. He tries the suplex again, but Haynes reverses it, slams him, then misses a flying forearm from the second rope. Back and forth until Haynes gets a lame clothesline for 2. Herc hits a lowblow as he connecting with Lil' Billy, then lands a kneedrop, belly-to-back suplex, back bodydrop and a fistdrop from the second rope for 2. The time limit bell sounds out at a completely random time. Slick gets the house mic and complains, while a "draw" decision is announced.

But wait..what's this?! Both guys want five minutes more..and the ref seemingly agrees! Herc stomps away for a bit, buy Haynes gets fired up and gets the upper hand. He tries to lock the full nelson, but Herc makes the ropes and Slick pulls him out. The heels bail and the ref counts them out, awarding the match to Billy Jack.

"Mean" Gene calls the Prime Time hotline, saying that if Heenan gets out of line, he can provide some dirt on him.

Yup, more MSG. I think you get the idea; just go here if you want the full blow-by-blow. I'll just jump to the finish to save you a click: Kirchner makes an unsuccessful jump and eats canvas. Orndorff moves in and applies the PILEDRIVER (it's doomsday for the skull) and gets the 3 count. Orndorff then gets the house mic and calls out Hulk Hogan...in case we had forgotten that he's now Hulk's Arch Enemy. Match was pretty much just a heat vehicle for Orndorff, as it lacked substantial offense from each guy.

Yup, one final visit to the same MSG card. The finish: All four guys enter the ring and in the confusion, Nikolai gets Slick's cane and blasts Spivey in the back of the noggin. Sheik then makes the easy 3 count to pick up the victory. Rotundo gets the cane and makes the obligatory BabyFace Clearing of the Ring. Match was pretty much just a way to get Sheik & Volkoff back together as a team and give them some more momentum. There were rumors that the British Bulldogs had agreed to drop the titles to Sheik & Volkoff before 1986 was over. Combine this match with last week's and it's a valid point.

As we wrap things up, Gorilla teases the Brain about how he recently got down on his knees to kiss the hand of "The King" Harley Race. Next week, we've got some substanial action from the recent "Big Event", on tap. In fact, I may just skip over that episode or do a super-abrreviated recap.

Why'd You Watch This?:
In terms of matches, this was a big step up from what they've been running. No syndicated leftovers and a good chunk of a recent MSG show. Considering they would occassionally run matches over a YEAR old, having stuff from less than two weeks ago is very refreshing. You might note that there's only one Ken Resnick interview, as they had been running two, religiously. If you were a fan at the time, following along with weeks of Lanny Poffo and Tiger Chung Lee matches, this was a treat. The old mantra for watching Prime Time is "skip the matches and just watch the studio segments". However, for this episode you can watch either the full MSG card (on its own) or Prime Time (on its own) and your time won't be wasted.