Hello again, everybody, it's time for Prime Time Wrestling with Gorilla Monsoon and your host, Bobby "the Brain" Heenan. Brain immediately starts in with how THIS week, he'll update all the humanoids on his new "Super Korean Wrestling Star". If it turns out to be Tiger Chung Lee in a mask, I'll probably crap my drawers. But with so much going on in the World Wrestling Federation, let's get down to ringisde for..

Looks like we'll be showing matches mostly from a Toronto Maple Leaf Gardens show, tonight. Gorilla and the Brain have the call. Jake is in street clothes and grabs the house mic, explaining that he won't wrestle in Toronto unless he can face Ricky "The Dragon" Steamboat. Fans, ref and Afi are all pissed. Jake walks away to a chorus of boo's. As he's going down the ramp, Afi ducks his head through the ropes; that's Jake's cue to return to the ring, beat the crap out of him and plant him with the DDT. Officially a forfeit win for Avi, I guess. Afi sells the DDT well, as the Rougeau Brothers have to run out help him. The crowd popped pretty well for the DDT, but part of that was based on the fact that Jake just saved them from a Sivi Afi match.

In the studio intro, they talk about how "Classy" Freddy Blassie has just sold 50% of his interests to the newcomer, Slick. Gorilla: "where did he come from? I understand he used to deal in some 'Ladies of the Night', if you will". Neither Slick nor Blassie are seconding Herc, though. McGhee starts strong with two drop-kicks and armdrags. Herc easily slams him, beats away and applies a rear chinlock. Another slam and Herc tries going up top. McGhee press-slams down, then delivers a reverse atomic drop and a nice vertical suplex. Irish whip, as Herc reverses and hits him with a knee to the stomach. Herc quickly applies his "inverted backbreaker" submission hold (or as we call it, nowadays: "the Torture Rack") and gets the win. Crisp, short and surprisingly watchable.

Moolah plays down the recent challenges she's been receiving from Velvet McIntyre. Resnick tries to ask for a recap of her date with Jim "The Anvil" Neidhart from The Mating Game. Moolah says it's none of his business, what happened. Resnick's a sick bastard for wanting to get intimate details of a possible Moolah/Neidhart tryst.

The American Express vs. The Funk Brothers

(Mike Rotundo & "Golden Boy" Danny Spivey vs. "Hoss" Funk & Jimmy Jack "Funk")
I feel silly for never realizing this, but the American Express would be the Varisty Club in about 3 years. The Funks try attacking as the good guys step through the ropes, but the US crews fights them off with stereo powerslams and atomic drops. Funks take a breather and bail to the floor. First few minutes is spent working a standing, stomp-along, side-headlock on Hoss. Jimmy Jack tries the Penultimate Knucklelock Challenge, but they end up working his arm for an extended period. Hoss takes over with a slam and some European (Texan?) uppercuts on Rotundo. To the outside, where Jimmy Jack tosses Rotundo into the steel barricade. Belly-to-back suplex and a double underhook suplex get 2 for Hoss. Rotundo reverses a vertical suplex attempt and makes the hot tag to Spivey. For once, it really IS "hot". Spivey drop-kicks Hoss, then slams both Funks. All four men briefly enter as Spivey sets up Hoss for his bulldog. Behind the ref's back, Jimmy Jack clothesline Spivey on his bulldog charge. Hoss makes the 3 count and grabs the win. It was mostly Rotundo/Hoss, but this match had a decent flow.

Wha? A midget interview?! Lang throws out challenges to Lord Littlebrook and Little Tokyo, even referencing the latter's "World Championship". Then some generic intro stuff about his size, career and travel schedule. Back in the studio, Heenan mentions that he once took Lang out to play golf in Beverly Hill, but he had trouble adjusting because he was used to miniature golf. Gorilla: "will you stop?!" Heenan's smirk after telling his joke is hilarious.

Heenan introduces his newest find, the masked Korean seansation "Kim Chee". Out comes Big John Studd in a mask. He tries to introduce himself, but whispers to Heenan: "what's my name again?" After only about a minute of messing around, Studd takes off the mask, to prove the point about how ridiculous the Machines are. Host "Mean" Gene Okerlund shows the Japanese magazine with the Machines on the cover. Heenan: "you can use that magazine when the roll runs out!" Honestly, I kinda' wish Studd and King Kong Bundy had milked the angle with masks of their own, in the ring. 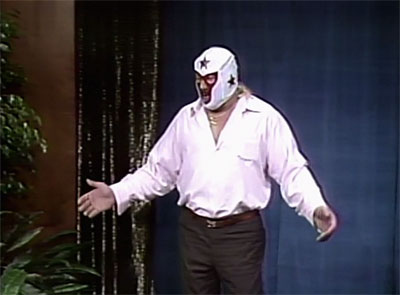 Sheik gets the house mic and tells the crowd to NOT chant "USA", since they're in Canada. Haynes counters by saying: "I'm proud to be an American and I'm proud to be here in CANADA"! Sheik tries attacking, but Haynes quickly turns the tables and clotheslines him with his headress, because he's the babyface. They hit the ropes and Haynes settles on a hip-toss, slam and a standing side headlock. Sheik fights back with an abdominal stretch and his always reliable gut-wrench suplex for 2. Haynes reverses a vertical suplex, then escapes another abdominal stretch, delivers a slam and a legdrop for 2. Sheik tries to walk out, but Haynes immediately cinches in the full Nelson. Nikolai Volkoff suddenly appears on the ramp to distract. Sheik nails Haynes from behind and puts him in his own full Nelson, inviting Nikolai in to kick him. Of course, that trick never works, as Nikolai "accidentally" kicks Sheik. Haynes covers him to get the 3 count pin and his biggest victory, to date.... to a massive pop, no less.

Our weekly dose of syndicated leftovers, but joined-in-progress. Brooks with a snapmare, but misses a kneedrop. Jones tries working the leg... a buncha' punches are thrown. Brooks avalanches Jones into the corner. He tries to do it, again, but Jones hops over into a sunset flips and rolls up Brooks for the pin.

The Rougeau Brothers vs. The Moondogs

(Jacques & Raymond Rougeau vs. Moondog Spot and Moondog Rex)
Back to Toronto and the Rougeaus get a great reaction from the crowd. For about the sixth time this episode, Heenan tries to get over his nicknames of "Batman and Robin" for the Rougeaus. Rex gets his arm worked over, then eats a drop-kick and single-leg takedown from Raymond. Spot gets to enjoy multiple headlocks, then Raymond jerks him to the mat with a wicked looking whipping armbar. Jacques gets a high crossbody-press for 2, then Raymond returns to crank the arm. Ref misses the tag to Rex, allowing the Rougeaus to do an illegal tag and swap out. Jacques goes for a monkeyflip ouf ot the corner, but Rex blindsides him. Spot flies off the second turnbuckle with a kneedrop. Jacques gets worked over for a good bit, getting double-teamed and dumped to the outside. Jacques tries a surprise flying body-press from the corner, but misses. Criss-cross time, but Spottie catches Jacques and plants him with a side backbreaker. Double-team bodystretch and an elbowdrop from Rex gets 2. Tag is finally made to Raymond, as he comes in with a punches, reverse kicks and the ol' "Double Noggin Knocker". Reverse-chop and a sitdown splash gets 2 for Raymond. 4-way brawl errupts, as Raymond does a flying press onto Rex, which dumps them over the ropes to the ramp. Jacques gets tossed over, but skins-the-cat back inside and rolls up Spot from behind to get the 3 count. In terms of flow, this was very similar to Express/Funks, but the good guys won.

"Feature match", from Madison Sqaure Garden, with Gorilla, Lord Alfred Hayes and Ernie Ladd on the call. Valiant (errr...excuse me, "Johnny V") has a Texas Rangers shirt on; leading me to guess that the Rangers were in town to face the Yankees that week. They start off with some grapplin', then hit the ropes until Dynamite blasts Bruti with two charging shoulderblocks to send him through the ropes. Bruti with a cheap shot and a belly-to-back to take over. He stomps away some more and Dynamite gets a desparation sunset flip pin attempt for 2. Bruti with a nice vertical suplex for 2. Dynamite comes back with some headbutts and his always-awesome snap suplex. He goes for a charge, but Bruti ducks and Dynamite eats floor. Burti digs into his trunks for a foreign object and smacks Dynamite off the apron. Bruti tries to suplex him in from the apron, but Dynamite flips out of it and turns it into a roll-up, off the ropes, for the surprise 3 count win. Afterwards, Bruti does a beatdown until Davey Boy Smith makes the save.

Well wrestling fans, that wraps it for another edition of Prime Time. Heenan promotes Paul Orndorff and Hulk Hogan's supposed "jealousy" as the show ends.

Why'd You Watch This?:
Good mix of matches and, for once, it feels like they're not just filling time. I feel like this is the first episode where Gorilla and the Brain really started to mesh well. Their commentary on the Toronto matches make things much more lively than previous duos and it adds consistency to the show. They keep their banter flowing well and touch on various topics, yet still manage to acknowledge and put over what's happening in the ring. As a result, this was a very fun episode to watch.