Hello again, everybody, it's time for Prime Time Wrestling with Gorilla Monsoon and your host, Bobby "the Brain" Heenan. With some new angles and arrivals, it appears we're finally getting past the post-WrestleMania II hangover. Yet, we've got a lotta' Boston Garden matches and double the Moondoggin' tonight, so don't get too excited. But with so much going on in the World Wrestling Federation, let's get down to ringside for...

"Mean" Gene Okerlund is teaming up with Gorilla, on the call. They name-drop Thronton's moniker of "man of 1,000 holds". I hope ARMBAR is one of them. Thornton and Rotundo start of with some criss-crossing, then taking it to the mat. TCL tags in and a headlock occurs. Blind-tag to Spivey and they do a basic double-team whip n' PUNCH. Headlock takedown from Spivey, they trade slams, then things into overdrive with another headlock. Leap-frog and craptastic drop-kick from Spivey. Front facelock from Thornton negates the house o' fire that was Spivey. This happens...for awhile. It what was supposed to be a double-team attack, TCL almost falls off the apron as Spivey runs into him. Chops from TCL, cuz' he's a "Master of the martial arts". Lukewarm tag to Rotundo and TCL does an over-sell into the corner. Opposite corner beatdown of Rotundo, then Thornton with some Euro uppercuts and a backdrop for 2. More Rotundo beatings, with the usual "ref stops the face partner from entering, inadvertantly allowing heels to double-team" spot that happens in about 75% of all 80's WWF tag matches. TCl eats a turnbuckle and it's "hot" tag time to Spivey. Big slam, elbowdrop and another craptastic drop-kick to send TCL to the floor. Rotundo with an elbowdrop for 2. Thornton manhandles Rotundo, until Rotundo leapfrogs over him and tags Spivey. Big bulldog from Spivey; which actually gets a good pop; then Thornton eats the 3 count. About as generic of a tag match as you can get. Al four guys were just...there... and didn't really have much chemistry as opponents or as teams.

Why? Gorilla references an old Boston Garden match between himself and Pedro, when the ring broke and they both disappeared. Whoa... I wonder if that is what started Gorilla's ongoing concern about "the ring being specially reinforced"? They start off by hitting the ropes, then Morales with a backdrop. Mild shoulderblock from Spottie and Morales with a slam. Spot chokes with the ring ropes on the apron, then suplexes him in for 2. Headlock from Spot riles up the Society of Resthold Haters. Over-the-shoulder sunset flip from the corner gets a quick 2 for Morales. They duke it out, then Spot with a surprisingly easy slam for 2. Spot goes for a fireman's carry, but Morales slips out, and rolls him up off the ropes with a reverse sunset flip for 3. In the studio, Heenan gets a shot at Morales' mother in Puerto Rico, saying he sends her 50-60 pounds of cheap wooden jewelry to sell to tourists.

They mention Corporal Kirchner for a bit, but the majority of the interview is directed towards the British Bulldogs. Supposedly. Sheik holds up a picture of himself from an "international magazine", then goes into his usual rant about losing to Hulk Hogan.

TNT Flashback: The Mating Game with Jim "the Anvil" Neidhart

A follow-up to the Anvil's last appearance on this "show". He refused to go on the grand prize date with Yolanda Jones, so he's back to ask the questions this time around. Oh, and "Mean" Gene is now the host. The bachelorettes are two normal-looking yaks and The Fabulous Moolah, masquerading as "Clarabell Dingham". During Moolah's answer segments, some fans yell: "where's Wendi?!" The grand prize is two $25 gift certificates from "Wilma's House of Polyester" and a trip to Hindisght, New Jersey. Anvil hams it up and seems to really be into the whole gimmick. He can't decide, so he lets the audience pick. Of course, they go with Moolah. Anvil's shocked, at first, but says: "what the hell" and picks up Moolah in his arms. Another segment that just kills your brain.

Race is wearing some star-spangled trunks and a ring jacket, which could be seen as a shot at "Mr. USA". Atlas shrugs off the intial offense and plants Race with a slam. A Headlock Happens. Race goes for a headbutt... but that never works against Atlas. They go outside and Race throws him into a wooden barricade. Race snaps him on the ropes as he tries to re-enter, then suplexes him in for a 2 count. Atlas reverses a second suplex, but misses a follow-up elbowdrop. Kneedrop gets 2 for Race. Swinging neckbreaker for another quick count. Atlas reverses an Irish whip into the corner and Race hits the post. Big beal and a one-legged dropkick from Atlas. Leaping headbutt from the second rope drops Race. Atlas goes for a splash, but Race takes a page from King Kong Bundy's book and gets the knees up. Race is quick with a sunset flip and scores the 3 count.

Interesting choice, as it's a very raw, stumbling interview. Tonga compares his recent slam of Big John Studd to a mother getting a shot of adrenaline by lifting a car off her child. Tonga wants the $15,000 Slam Reward from Heenan.

Gorilla: "fans are really in for a treat". Haynes gets things started with a standing side headlock! Quick criss-cross, follwed by a hip-toss and a weak dropkick. Back to the Haynes Headlock as the "Borrr-ing" chants are very audible. Reverse double chinlock doesn't do much, but Rex counters with a belly-to-back suplex and some stomps. Side back-breaker gets 2 for Rex. Snapmare and knee-drop for another 2. Rex goes for his own chinlock and the fans are hating this. Haynes "blocks' Rex's punches in a very choregraphed manner. Seriously, this segment is one that would make your 80's friends say "this is SO fake". Rex sells some shots and tumbles out to ringside. Haynes blows another dropkick, leapfrogs, hits a clothesline and applies the Full Nelson to get the submission win. I understand that he's new to the WWF and all, but any push given to Haynes is too much; he's that terrible. He would've been a better fit for the AWA, at the time.

King Tonga vs. "The Duke of Dorchester" Pete Doherty

Tonga no-sells Duke's offense, then chops him across the ring. Tonga hooks a Full Nelson, but Doherty puts both feet on the top rope; the ref asks for a break and Tonga gladly agrees, dropping Duke to the mat. Duke goes for stepover toe-hold, but Tonga kicks him in the mush, then hits a belly-to-back suplex. Jesse Venutra special stops Tonga... but he no-sells by smashing his own head into the turnbuckle. Duke misses a Thesz press into the corner. Tonga with a nice, high, dropkick. Fun spot as Tonga somersaults away from a backdrop attempt. Backdrop, thrust kick and a flying headbutt from Tonga scores the 3. Sure, a basic squash and it wasn't a work of art, but this was short and I enjoyed it.

"Mean" Gene Okerlund on Location in Japan with the Machines

This week, we've got "Super" and "Giant". Gene asks them if they're the Masked Superstar and Andre the Giant, respectively, but of course they deny it. Generic threats are thrown at King Kong Bundy and Big John Studd. Gene gives the Machines a quick lesson about weasels, too. "Number One Ichiban Tag Team in the whole world". In the studio, Heenan gets riled up about Andre...and Gorilla retorts: "that's not Andre. Andre the Giant can't speak English that well". 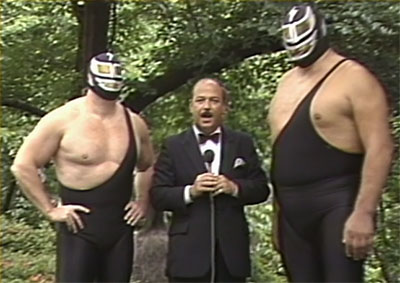 A re-broadcast from the weekend synicated show ("Championship Wrestling"?), with Vince McMahon and Bruno Sammartino on the call. Orndorff's strictly business on the way to the ring, but gets into the pre-match posing and crowd pandering with Hogan. Hogan starts with an easy slam on both Moondogs. Big pop as Orndroff comes in to toss Rex around. You can tell an ANGLE is brewing, because we see Hogan reaching out his arm for a tag and Orndorff brushes him off. Flying bodypress gets 2 for Orndorff. "We Want Hulk" chant as Orndorff takes on the Moondogs alone. Spot gets a cheapshot and Rex delivers a suplex. Miscommunication Spot (literally...hey-oh!), but instead of the "hot tag", Orndorff simply piledrives Rex and gets the pin. Hogan's in to celebrate and pose with his partner. Back in the studio, Gorilla stirs the pot about the lack of a tag.

Well, folks, that about wraps it up. Heenan claims to have video tape evidence exposing Andre as a Machine. He claims he'll take it President Ronald Reagan and keep Andre out of the country.... however that works out in Brain Logic.

Why'd You Watch This?:
100% more Danny Spivey and no less than THREE Moondog segments, this week. Another garbage episode that just seemed to be filling time. The only noteworthy segment is the Hogan/Orndorff match, which was shown on the weekend syndicated show. Even then, it's more of angle than an actual match. Not surprised to say that this is another episode you can skip over.