Hello everyone and welcome. It's Gorilla Monsoon and your host, Bobby "the Brain" Heenan. Heenan wastes no time and hits the ground running, throwing out jabs at Koko B. Ware, Sapphire and Tito Santana. "Have you ever seen Koko and Sapphire together? Hmm. I thought they might be the same person". He alludes to the Heenan Family's plan for the upcoming Royal Rumble and claims that his men have reluctantly agreed to be in the match, after all. As a fun bonus, Gorilla even ribs the Brain about his new PERM! 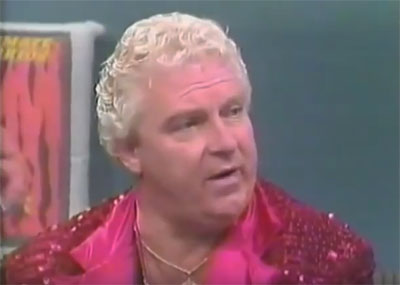 This is either a "Wrestling Challenge" leftover, or a re-broadcast with new commentary from Tony Schiavone and Lord Alfred Hayes. Burton complains to the ref about Piper's very presence. After two intial lock-ups, Piper makes a clean break and Burton gets in cheapshots. Piper's pissed, so he whips him in for a clothesline, plants him with a belly-to-back suplex and makes the cover with one foot! Piper would often work little stories like this into his jobber squashes. He made the mundane fun.

Back from commercial break, with Gorill on the banana phone with super-fan "Harriet". Gorilla claims that it's her "First Ammendment Right" to call her cable system and get them to carry WWF PPV's!

We have NEW Tag Team Champions in the form of the Colossal Connection-- Andre the Giant and Haku! Flashback to "last week", when the Connection cut off the ring and dominated Ax on their way to bagging the belts. Easily the most lop-sided match in Demolition's history. We get Fightin' Words from both teams. Guess what?! They'll all be in the Royal Rumble! Call now! BTW, always bothered me that these "Update" segments were billed as "from the pages of the WWF Magazine"... yet never actually were in said magazine. For instance, the magazine they're promoting, here, covers the Survivor Series.

Earthquake is still coming out to Dino Bravo's theme music and Hart is waving the Canadian flag. Sexton gets thumped into the corner, then tossed out to ringside. Match is basically over, but Earthquakes slam him, drops an elbow then delivers the Drop-Ass Splash to get the pin. Sexton does a stretcher job to fill time and sell Earthquake as a Big Deal.

A direct re-braodcast from "Superstars of Wrestling" with Jesse "The Body" Ventura and Vince McMahon on the call. They promote Bruti's upcoming Royal Rumble match against the Genius... which, I guess, is the perfect opportunity to run an in-set promo from Rick "The Fashion Model" Martel. South sells Bruti's punches and slams like he's being murdered. Sleeper hold, as Bruti gets the submission win. South gets a few locks, trimmed. No problem there, because South could do the Scissors Job every night for the next two weeks and he'd still have plenty of poofy hair.

But wait...what's this? Across the arena on the interview podium, it's Rick Martel; decked out in a trench coat and hat; running down Beefcake's sense of style. Bruti storms the podium, runs off Martel, then cuts up his trench coat and hat. Here's a feud that went absolutely nowhere, unless you count house shows. I think they had planned on airing this a few weeks earlier, but held off due to Bruti's involvement in "No Holds Barred: The Match, the Movie".

In the studio, Gorilla randomly has a (banana phone) call with Arnold Skaaland.

Back to "Challenge". Basic clinic from DiBiase, allowing time for an inset promo from Jake "The Snake" Roberts, who ponders: "how many times can you reach out into the fire, before you get burned?" Wolfe reverses an Irish whip and lands an elbow, but eats one from DiBiase and gets suplexed. DiBiase follows up with a gut-wrench suplex, a butterfly suplex, then a neckbreaker and a piledriver (it's doomsday for the skull). Big powerslam and it's time for the Million Dollar Dream. DiBiase really looked like a million bucks; pun intended.

"Who?" Hype for the Royal Rumble. Due to DiBiase's shenanigans last year, there will be "extra security" for the drawing of the numbers. We get a promo from The Genius, running down Brutus "The Barber" Beefcake. Then a typical energetic promo from the WWF Champion, Hulk Hogan.

Another in the Duggan Jobber Classics that ran until 1993. Inset promo from The Big Bossman, promoting his upcoming match against Hacksaw at the Royal Rumble. Hacksaw sets up for the 3-point stance and Greene alertly rolls out of the ring. Duggan follows him up the aisle, pounds away and throws him back in. Well, that was slightly different. Big slam and this time the 3-point stance cgarging clothesline gets the pin.

For a Savage interview, this is very mundane and boring. He'll be in the Royal Rumble and also on the special Brother Love Show to meet Dusty Rhodes and Sapphire. I think maybe 3 kids didn't get the well-telegraphed message that this meant: "a feud between Savage and Dusty will start at the Rumble".

Pulled from a Copps Coliseum show in Hamilton, Ontario, eh. Roma attacks from the apron and leaps in with a sunset flip pin attempt. Armdrag, then Bad News hops out for a breather. Roma flips him in from the apron and delivers an atomic drop. Bad News does his usual tease of walking out on the match, complaining to the ref that Roma never let him get into the ring. Brown returns to the ring and tries to be polite and gentlemanly by offering a handshake. I'm surprised to see that Roma has actually learned something from his years as a prelim guy and fakes an acceptance. Brown with a sucker-kick, but Roma's expecting it and chops away. But...he puts his head down and Brown goes to work, chopping and choking. Brown unties the turnbuckle pad... but of course it backfires and Roma thumps him into it. Flying forearm from the top gets 2 for Roma. Reverse elbowsmash for another 2. Roma misses a charge into the corner, then Brown hits him with the Ghetto Blaster and picks up the pin. Roma seemed to be dead-in-the-water at this time, so it was somewhat refreshing and surprising that they gave him a mild push with the Power & Glory team, about six months later.

Back in the studio, Arnold Skaaland drops by for a visit! He's there to talk about how YOU can call your cable company and order WWF PPV's! Gorilla mentions that Heenan has said some "unkind things" about Skaaland. In typical Weasel fashion, Heenan quickly rebukes that and brown-noses him. This was certainly random.

Young does a few "dance" moves as he's introduced, proving that he still has his copy of "Alfonso's Breakin' & Poppin' Book". Honky & Hammer aren't introduced as "Rhythym n' Blues" by ring announcer Mike McGuirk, but the commentators drop the name. Young flips out of a Hammer armbar and delivers a drop-kick. Riggins comes off the top with a haymaker. Hammer powers him into the opposite corner and suckers him into a whip and elbowsmash from Honky. Hammer comes in for his own version, then performs a butterfly and belly-to-back suplexes. Hammer adjust the shin guard, clamps on the figure four leglock and the submission victory is elementary.

"Mean" Gene teases that, perhaps, Dino Bravo and the Ultimate Warrior might cross paths in the Rumble! Here's a flashback to "Superstars of Wrestling", last week, when Warrior did a run-in on Bravo's jobber squash. Bravo gets tossed over the top rope, then the Earthquake comes in challenge Warrior. Bravo is back with a sneak-attack chairshot and ringside beatdown. We get promos from each side. Gene runs down the rest of the card, complete with those fun old-school screen graphics. Oh wait, there are also promos from The Genius and Jim Duggan, to boot.

Some fans in the upper level are actually doing the "Bird-Bird-Bird" dance. But this was taped in Nashville, where entertainment options are limited (hey-oh). 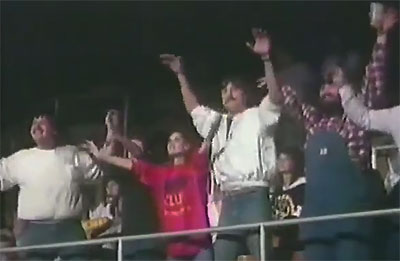 Sharpe gets a few good "yaaaaaaa" bellows and beats the stuffing out of Koko. Koko reverses a backslide for 2, but Sharpe is looking like a monster. Koko ducks under a shot and comes off the ropes with a bodypress for 2. Sharpe puts his head down and is prime pickings for Koko's "Ghostbuster" (brainbuster) suplex.

"Feature time" as we go back to the Copps Coliseum. In the studio, Gorilla mentions that "Bravo has never held a title here in the WWF". Errrr... call Dominic DeNucci, then insert your smarky rebuttal here. They take turns posing for the crowd and yeah, Hamilton loves Chico. Bravo wins the intial lock-up and slap his pecs. Knee=lift and knife-edges from Bravo, then Santana with a flying bodypress for 2, followed by some drop-kicks to send Bravo packing to the floor. They do the Penultimate Arm-Wringer Challenge, with Chico gaining control. An armbar happens. Santana punches him into the corner, then whips him to other side for a failed monkeyflip. Bravo takes over with a Camel Clutch. They fight over a backslide, until Chico gets a 2 count. Bravo's back in control with a series of stomps and a bearhug for a few minutes. Bravo's supposed to be cinching it in with his arms, but it looks like they're just dancing together. Bravo with a slam, but he misses something from the top rope and Chico smacks him in the tummy. Backdrop from Chico and he goes for the flying forearm...but right into Bravo's side suplex slam! Quick, surprise 3 count as Bravo gets the win. Aside from that last move, Bravo looked terrible.

Gorilla and the Brain wrap it up in one final segment. Before we go, if-- for any reason-- your cable company doesn't carry WWF PPV's, then pick up the phone, call the company or even write a letter to your senator or congressman. Wait...there's a PPV coming up?!

Why'd You Watch This?:
I think it was around this time that I realized "Prime Time" was the best use of my wrestling viewing time allotment. It had all the highlights and happenings from "Superstars" and "Challenge" packaged in with two bonus "feature matches" and the fun studio segments. I haven't seen stuff from this era since it first aired, so maybe that's why I enjoyed this more than usual?