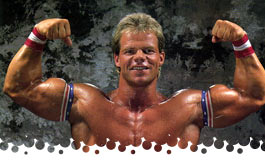 - It's the go home, Prime Time special leading us into WrestleMania XIa, the WrestleMania with the honor of being held at one of the least "WrestleMania" feeling locations possible. Yeah, everyone rags on WrestleMania 2, 4, 5, and especially 9, but 2 came from three major markets, 4 and 5 from a very distinct setting, and 9 from Caesar's Palace. 11? The Hartford Civic Center. YAY. Taped from the Memorial Civic Center in Stockton, CA, with Vince McMahon and Jim Ross calling the action.

- We open the show hyping the Main Event of the evening, a Steel Cage Showdown™ between rivals Lex Luger and Tatanka. You know, a match that would've at least felt like a WrestleMania worthy match, instead of Tatanka being in a non-wrestling role and Luger teaming with Davey Boy against the Blu Twins? One of the few times where you could actually rebook and make WrestleMania XI a bit better. We get promos taped inside the Cage, with Tatanka blaming Luger and his people for ruining the country for Native Americans.

Yeah... how do I explain this one? Jarrett worked a match with Barry Horowitz (pre-push) and offered him a rematch with the Title on the line, but Backlund attacked Horowitz from behind and signed the contract instead, and yes, they try to introduce the idea that if Backlund wins the Title, he defends it against Bret Hart in their I Quit Match at WrestleMania. I don't think you could find two heels people wouldn't want to cheer for more than these two. Backlund sends Jarrett from corner to corner and plants him with a slam. He takes Double J over with a double under-hook suplex for a near fall. Backlund with a delayed atomic drop, knocking the Roadie off the apron in the process. Whip to the ropes, Jarrett takes Backlund over with a hip toss and hooks a short-arm scissors. Backlund rolls through and lifts Jarrett over his shoulder, but Roadie sweeps the leg, practically in full view of the referee. We return from a commercial with Jarrett in control with an abdominal stretch. Jarrett with a slam and inside cradle for two. Sunset flip for another two count. Backlund avoids a charge to the corner and connects with a Piledriver. He teases the Chicken Wing, but Ramon runs in and attacks Backlund for the DQ at 4:59. Backlund quickly recovers and hooks the Chicken Wing, while Jarrett and Roadie put the boots to him to add insult to injury. Bret Hart makes the save, and then about 30-seconds later, the 1-2-3 Kid. *1/2 Heel vs. Heel never works, and while the work wasn't bad, the crowd, even with canned reactions, didn't seem at all interested.

- Lengthy commercial hyping the Main Event of Lawrence Taylor vs. Bam Bam Bigelow. It still doesn't make any sense to me, but if that isn't a sad reminder about the state of the WWF in 1995, then I don't know what does.

For those who white-washed 1995 from their memory, Seone (pronounced see-own-e) is better known as The Barbarian, having a short run as one of the New Headshrinkers when the WWF and Samu parted ways. This is clearly designed to be a warm-up match for Bigelow, since the Headshrinkers didn't do much of anything for the remainder of their time in the WWF. We join the match already in progress, because we cannot possibly cram three short matches into a 60-minute window. Seone ducks under a clothesline and hits Bigelow with his own. He goes for a slam, but Bigelow lands on top of him for a two count. Hey look, Danny Davis still has a job. Bigelow puts the boots to Seone while Vince hypes a Pre-WrestleMania Workout in Time Square. Seone with a clothesline and a pair of rights. Whip to the ropes and a Powerslam only gets a two count. Seone heads to the top rope, but misses a diving headbutt. Bigelow recovers, connects with an avalanche and enziguri, and finishes with a twisting body press from the top rope at 2:57. DUD Nothing to see here. Ted Dibiase and the Million Dollar Corporation make their way to ringside while Bigelow cuts a post-match promo on the former New York Giant.

- Bret Hart takes on Owen Hart in a No Holds Barred Match... tomorrow night, on a special edition of Monday Night Raw. LAME!

- Vince McMahon is in the ring for a Very Special Interview™ with the WWF Champion, Big Daddy Cool Diesel. Jim Ross swears everybody loves him, but the crowd reaction seems to indicate otherwise. They wouldn't try and lie to us about such a thing, would they? Diesel must've forgotten he was at WrestleMania X, when he says this would be his first WrestleMania. He was ejected for interfering in the IC Title Ladder Match. Vince puts over Shawn Michaels as if he were the conquering babyface instead of the sneaky, conniving heel. This brings Michaels and his new Bodyguard, "Sycho" Sid, to the ring for a rebuttal. Who gave clearance for Sid to cut a promo? Seriously, Shawn's promo seems to draw more of a babyface response than anything Diesel said, then ends it with "Shawn Michaels will go over" at WrestleMania. Diesel responds "over my dead body." Not a bad segment.

- WrestleMania XI Report with Todd Pettengill to fill time as the Cage is being set up. On a show that was taped nearly two weeks ago. Celebrities involved at WrestleMania XI includes Pamela Anderson, Jonathon Taylor Thomas, Nicholas Turturro, Jennifer McCarthy, and Salt n' Peppa. The complete lineup is announced...

- Earlier today, Men on a Mission turned heel by attacking the Smoking Gunns on the Action Zone. It wasn't until a week or two later that they beatdown their manager, Oscar, giving fans world wide a reason to cheer because we wouldn't have to hear his terrible rapping ever again. I don't think anyone expected Mabel to get as big of a push as he ended up having.

I'm seriously wondering how hard the WWF promoted this special. I honestly didn't recall it taking place until years later when I was heavily into the tape trading scene (or as heavy as it was by the early 2000's.) The arena is lit so poorly you'd think the crowd was half empty and not cheering as wildly as the canned reactions indicate. Tatanka attacks before the bell with chops. Whip to the corner and Luger comes back with a trio of clotheslines. He rams Tatanka to the buckle and pounds away with rights. Tatanka gets to taste the cage, but don't expect blood. Unless you were Bret Hart, you weren't blading. Luger comes off the ropes and misses the jumping elbow that always misses. Tatanka goes for the door, but Luger recovers from such awful punishment as a standard back bump to keep him from escaping. We return from commercial break with Tatanka taking Luger over with a suplex. Luger gets to meet the cage face first, but won't let Tatanka climb out of the cage. Luger gets a boot up on a charge and no-sells chops like he were in the ring with Ric Flair. What exactly is a "donnybrook"? Luger with a fist to the midsection and a bulldog, followed by a suplex for two. Whip to the corner and Luger with a Powerslam for another two count. Tatanka with an inverted atomic drop, but Luger cuts off another attempt to escape. Luger slams him off the top rope and nails him with the loaded forearm from the second rope, and yeah, that's good enough for the three count at 8:34. * OK, so maybe I can see why this not being at WrestleMania was a good idea after all. At least it was kept reasonably short, and gave closure to the Luger/Tatanka program.

- We end the night with a promo from Bret Hart about his matches with Backlund at Mania and Owen on Monday Night Raw (including goofy cartoon on a dry-erase board of Owen) and an advertisement for Salt n' Peppa's appearance at WrestleMania XI.

Final Thoughts: If this didn't get people hyped for WrestleMania XI, I don't know what would. With the exception of a well done segment with Diesel and Shawn Michaels (there's a surprise), everything else felt flat. Bam Bam squashing a barely used tag wrestler doesn't really make up for the fact that LT was never used in a live role with the exception of his Rumble appearance, doing a lame heel vs. heel match without any heat for the sake of filler, and wow, I know the blue bar cage wasn't an automatic win for good matches, but Luger/Tatanka was one of the worst Cage matches I've seen from this era. This would mark the last "Sunday Night Slam", as the name was recycled for the 30-minute countdown show leading into the live PPV, and this might've been the last prime time special to feature first-run matches for years. With the exception of non-wrestling specials like the Slammy Awards, I don't think we'd see fresh wrestling content in a Prime Time special until the return of Saturday Night's Main Event in 2006.