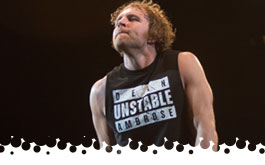 The injury bug claims another victim, and this time it's at the worst possible time. John Cena, who just returned from a two-month hiatus to film a reality TV competition, will be out for approximately 6-9 months following shoulder surgery, not unlike what has sidelined other names like Randy Orton and Cesaro. With Seth Rollins out for an extended period, and Daniel Bryan being all but forced into retirement by the WWE medical staff, the roster is looking weak and with WrestleMania just around the corner, what can the WWE produce to fill a 100,000 seat football stadium? When does Vince McMahon push the panic button and bring back as many “part-time” stars possible to pad out the show even more?

The New Generation version of McMahon vs. Austin continues, with Stephanie McMahon opening the show to belittle Roman Reigns as much as possible. No, firing someone isn’t a good enough punishment, but instead she would use up Reigns until his body had fallen apart and then he’d be broke and out of a job. Seriously, is this the kind of promo you want to cut when there’s lawsuits lined up for former wrestlers looking for medial compensation for years of abuse put on them while working there (Yes, most of those names that have surfaced are weak, but still, it’s something that exists right now)? The big Main Event for the 1st Raw of 2016 is Roman Reigns defending the Title against Sheamus, with Mr. McMahon as the special referee. Despite McMahon’s best efforts, the return of EVIL Referee Scott Armstrong, and tons of cheating, Reigns pulled off the victory to retain his Championship.

Dean Ambrose and Kevin Owens continue their rivalry over the Intercontinental Championship. It was last week on Raw where Neville score a fluke victory over Owens in about 30-seconds, so this week we got a rematch that was a bit more balanced, with Owens walking away victorious. Post-match, Owens tried to continue punishing Neville, but Ambrose made the save and ended up putting Owens through a ringside table. Later in the week on WWE Smackdown, they battled it out for the Championship for the first time since the title switch at TLC. After a long back-and-forth battle, we ended up with a cheap Double Count-Out to ensure we don’t get a true finish until they likely battle at the Royal Rumble.

The main program of the Divas Division seems to have settled on DIVAS Champion Charlotte and former best-friend Becky Lynch. I don’t think Paige has been on TV lately, Sasha Banks is a non-factor, Nikki Bella is out hurt, reducing “Team Bella” to JTTS status, and nobody cares for Naomi and Tamina. I guess we should be happy they are no longer “pushing” Becky Lynch as a gullible fool. They had another “friendly” match this week, but unlike last time where Charlotte suckered Becky into a situation that she could take advantage of, Becky turned the tables on her and score a pinfall with a handful of tights. Later in the week on Smackdown, Charlotte defended the Title against Becky in another long, competitive championship match to kick off a “new era” of Smackdown. Charlotte won under nefarious circumstances. Why bother having another match when Charlotte just pinned the challenger?

Alberto Del Rio is still the reigning United States Champion, and with John Cena out of the picture for at least half-a-year, there’s probably a lot of juggling around ideas on what to do next. Cena came out on Smackdown, possibly taped before we knew the extent of his injury, but honestly I don’t remember if the news broke on Wednesday or Thursday. He came out and gave his support to Kalisto, one half of the Lucha Dragons. They opened Smackdown with a Non-Title Match, with Kalisto picking up a surprise three count on the Champion. I’m pretty sure this was Del Rio’s first pinfall loss since returning to WWE. Who knows what this will mean for the following week.

With Kalisto involved with Alberto Del Rio and Sin Cara out with an injury, then we’re now trying to figure out what to do next with the New Day. They’ve been Champions for four months now and blew through the Dudley Boyz and traded wins with the Lucha Dragons. The Usos are being dusted off again, despite crowd interest being surprisingly low. Maybe its because the crowd likes the New Day as heels, but it feels odd that a team that was at one time the most over in the division is now getting minimal pops at best, and just feel like they’re missing something. WWE probably could do something to fix the division for the short-term and maybe promote Enzo and Cass from NXT, but we must recycle the same couple of teams over and over again.

File this all under the category of stuff that is kind of worth mentioning, but can’t really stretch out beyond a sentence or two... Titus O’Neil and Stardust have yet another match on Monday Night Raw as they continue to tease that O’Neil is trying to bring Cody Rhodes back. The Stardust gimmick has ran its course and then some, so anything is an improvement right now. Heath Slater, the leader of the Social Outcasts, scored a fluke victory over Dolph Ziggler. Yes. HEATH SLATER WON A MATCH... but it wasn’t on Superstars or Main Event, so I don’t care... Big Show and Ryback had a meaningless match until the Wyatt Family interrupted. Please God, tell me we won’t see Big Show vs. The Wyatts... Chris Jericho has announced his 93rd return and that he will be in the Royal Rumble Match. Speaking of the Royal Rumble... more on that later.

As usual, there’s not much happening on Superstars or Main Event really worth going into detail about, so here’s what I do for my own personal amusement: we keep track of the results, including win-loss records, and basically keep tabs on how often certain people appear on these shows, who wins the most, and who, besides Heath Slater, loses the most. It’s one of those things I’ve done with the C-level shows as far back as Velocity and Sunday Night Heat. Damn it Slater, why couldn’t you have saved that victory over Ziggler for one of these shows!? Last week, we got a random tag team of Jack Swagger and Mark Henry, Tyler Breeze made his first C-level appearance, and Adam Rose continues to have a poor record, almost as bad as Slater.

From WWE Superstars, taped on January 4th but technically broadcast at a later date... Tyler Breeze (3-0) makes his Superstars debut, handing Jack Swagger (6-1) his first loss on Main Event or Superstars since keeping track the first week of November... the random tag team of Goldust (2-1) and R-Truth (3-0) def. The Ascension (0-4) as we make it two weeks in a row with the Ascension doing a job to a randomly thrown together baby-face team.

The 28th Annual Royal Rumble PPV will take place on January 24th,2016 from the Amway Center in Orlando, FL. Yours truly will NOT be in attendance, but the WWE will be passing through the night before in Ft. Myers, so expect that to be included in that week’s edition of the weekly report. Shameless self-promoting aside, the Royal Rumble is usually the most exciting nights of the year, with the unpredictable nature of who will be working the Royal Rumble Match, and for the last two years, crowds completely dumping on WWE’s long term plans. Three years if you want to include dumping on Cena in favor of Ryback when the inevitable Rock vs.Cena II was in the books for WrestleMania 29.

- The big news coming out of this weeks episode of Monday Night Raw is that Roman Reigns will defend the WWE Championship in the 30-Man Royal Rumble Match. Yes, you read that right. For the first time since 1992, the Royal Rumble Match will have the World Championship attached to it as the prize for the winner. The list of participants has grown a bit since last week, when only Big Show and Curtis Axel were announced for the match. This week on Raw, The entire Wyatt Family clan has thrown their names in the hat, as well as The Ryback, Dolph Ziggler, the returning Chris Jericho, and of course, Roman Reigns. I really think making this Rumble a Championship Match will add a new dynamic to a match that has flat-lined the last few years because of a lack of creativity and poor decisions in what to push and not listening to the vocal fans. The only problem I can see coming out of this is the very real possibility of Triple H returning from his hiatus and becoming the World Champion for the sake of just making himself Champion again. They couldn’t be that stupid, could they?

- No other matches have officially been announced, but based on the current direction of the roster, we can still expect an Intercontinental Championship Match between Dean Ambrose and Kevin Owens, the direction of the Divas Division points to Charlotte defending the Championship against Becky Lynch, and unless something else throws the plans out of balance, the New Day could be defending the Tag Titles against the Usos. With those three matches being a possibility, I’m sure we could get something else on the undercard to pad out the show, but hopefully it won’t be something lame, like when they did the Ascension vs. New Age Outlaws last year.

Final Thoughts: Without new NXT content for two weeks, I won’t try to stretch this out for much longer. I apologize for the shorter version than usual, but trying to cram in 27 years worth of Royal Rumble PPV’s will be taking its toll on me for the next couple of weeks. I’m well into the 3rd Part of that, so I can relax a bit and pace myself a little bit more wisely, and with the return of NXT TV next week, I’ll try and get back to 4 main features to cover. Hopefully the Royal Rumble card will be more filled out, too. Until next week...