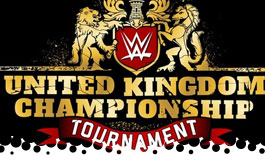 -From Royal Albert Hall in London, England. Mauro Ranallo and Nigel McGuinness are calling the action.

Bate gets the better of Strong in the feeling out process. Quick tags are made and Seven lights up O'Reilly with chops. Bate leaps off the top, rolls on Seven's shoulders, and hits Strong with a nifty senton. Strong lands a baseball slide drop-kick to end Moustache Mountain's punching dominance. Seven gets picked apart by the UE for several minutes in entertaining fashion. Bate gets the hot tag and doesn't waste the opportunity to plow through Strong, including hitting a standing Shooting Star Press. Bate takes turns spinning the UE on his shoulders, but O'Reilly counters into a sleeper. Bate German suplexes Strong while dropping O'Reilly from the sleeper! The UE recover, hitting Seven with a back suplex for a 2 count. Seven ducks a double team attempt and the UE knock each other down. Moustache Mountain deliver a sick lariat/German suplex combo on O'Reilly, but Strong breaks the pin! The match has completely broken down and now it's a contest to see who can hit the hardest. The UE look to finish Bate but have another miscue, resulting in Bate wiping out O'Reilly with a dive, and Moustache Mountain finishes Strong with a Burning Hammer/lariat combo at 11:36! The fans pop for the title change and the mustachioed gentlemen stand tall. This was delightful to watch, as it provided big stunts and false finishes without extending several minutes past its crescendo, ****Ľ.
Winners and new NXT Tag Team Champions: Moustache Mountain

-Earlier today, NXT U.K. General Manager Johnny Saint told reporters that he was impressed by the talent on display in the tournament.

Morgan is a British tomboy with an appealing look, so hopefully she's good. They evenly exchange holds early on, Morgan implements a headstand to reverse a wristlock. The pace quickens, and they trade hip tosses and armbars until reaching a stalemate. Kelly begins to build some momentum with a mix of power moves and stomping. Kelly cradles the legs and stretches Morgan into a Dragon Sleeper. Morgan hits a penalty kick to the chest for a 2 count. Morgan shows life with a superkick and springboard rolling senton. Kelly answers with a German suplex and running basement drop-kick. Morgan blocks a straight jacket suplex and awkwardly looks for a pinning combination but scores the pinfall at 7:03. Decent exhibition match that told a good little story of Morgan fighting an uphill battle, **˝.
Winner: Charlie Morgan

-Commercial for Extreme Rules, which seems completely uninteresting compared to what I've been watching.

Johnny Saint adds Noam Dar at the last minute, I suppose to establish his authority. Also, shows how much I've been paying attention, but Dar has been on the shelf for the last six months. Banks is still sporting bandages from his tournament injuries, which serves as a nice target. The action quickly heads to the floor, where Webster gets to show off his swinging headscissors takedown and Dar hits a spinning dive off the top rope. The chaos moves back to the ring, where the main story continues to be Banks and his injuries. Webster goes for a top headscissors on Andrews, who lands on his feet. Andrews nails a reverse rana for a great near fall. Dar returns and locks on to Andrews' leg, while Banks applies a modified crossface. Webster prevents Andrews from tapping and punches a defiant Banks in the head (who refuses to break the hold through several shots). Banks clears Dar with the Slice of Heaven, but Andrews counters Banks with a stunner variation. Andrews misses the Shooting Star Press, but Dar wrenches Banks' bad arm on the ropes. Dar's Shining Wizard finishes Banks at 8:51! This spot-fest was all kinds of fun, most nearfalls were broken up rather than kicked out of, so it maintained more credibility than these types of matches tend to have, ***˝.
Winner: Noam Dar

-The Coffey Boys storm the ring and beat up the already injured Travis Banks. Noam Dar teases a save but decides he'd rather not get involved.

-Wolfgang is interviewed backstage about his NXT North American Championship match against Adam Cole. Wolfgang has been waiting for a long time to have the chance to break Cole's teeth.

Cole becomes the defacto babyface due to the overness of his "Adam Cole, Bay Bay" chant and Wolfgang's aggressive ring style. Cole hits an early neckbreaker for a 2 count. Wolfgang counters with a fireman's carry gutbuster. Wolfgang thrashes Cole around with waistlock takedowns, but Cole answers with a leaping head kick from the floor. Cole foolishly leaps off the turnbuckles into a mid-air gutbuster. Wolfgang's momentum ends when he dives into a superkick. Cole hits a backstabber for a 2 count but can't lift Wolfgang onto his shoulders. Leaping enziguri by Cole and he successfully lifts Wolfgang for a headbuster. Wolfgang rebounds with a fireman's carry slam, but totally misses on a moonsault attempt. Cole repeatedly attacks the face but Wolfgang flips him off his feet with a lariat. Cole blocks a Swanton Bomb and finishes with a running knee to the head at 10:03. Perfectly solid wrestling in display here, even if the mid-air counters were a bit too telegraphed for my liking, ***.
Winner and still NXT North American Champion: Adam Cole

EC3's physique makes me wonder if the WWE did away with the wellness policy. VD insists on facing Black, but quickly tags in EC3. Black takes a seat in the ring to lure EC3 into a roll-up. VD is happy to tag in once EC3 has the advantage, but Black avoids a double team and Ricochet illegally clears the ring with an assortment of aerial attacks. VD turns up the aggression as he and EC3 isolate Ricochet. This includes a funny spot where Dream teases a dive to the floor and doesn't deliver. That seems like the most obvious way a popular heel can get actual heel heat. Ricochet saves himself with a neckbreaker/DDT combo on both opponents and Black gets the hot tag. Black catches EC3 and Dream with a springboard moonsault but Dream comes back with a spinebuster. EC3 accidently shakes VD off the top but manages a lariat on Black. A string of stiff shots leaves everyone on the mat for the obligatory standing ovation and "NXT" chant. Dream takes over the match and gets many nearfalls in a short time frame, including a Dream DDT on Black. EC3 tags but ends up getting caught by Black Mass and pinned at 15:53. Turns out Dream actually walked out on the match. Despite having great crowd heat, this felt like a house show main event until the chaotic final 4 minutes, ***Ľ.
Winners: Aleister Black and Ricochet

-Ricochet does that thing where he hands the NXT title over to Black, but makes it clear he would like to take it away from him.

They start off with some quality chain wrestling, as Storm manages to hang with Baszler and escapes a headlock to restart the match. They exchange more holds while the crowd starts singing. Baszler kicks the leg and dances, prompting Storm to answer with a well delivered suicide dive. Baszler avoids a running kick, causing Storm to hang herself up on the barricade. Baszler zeroes in on Storm's freshly injured leg during a heat sequence. Storm guts her way into a comeback, hitting a big superplex for a nearfall. Baszler shakes it off and grapevines the bad leg, but Storm strikes her way out. Desperation head butt by Storm, followed by Storm Zero (head drop on the knee). Baszler recovers fast enough to make fun of her for no-selling but Storm rolls through the Coquina clutch and nearly steals the title with a pinning predicament. Baszler tries again and locks on the Coquina clutch, but Storm rolls into the ropes. Baszler applies the hold one more time on the floor and gladly accepts a count-out victory at 12:07. Storm's gutsy babyface performance really made this match, and Baszler did well as an unstoppable force, ***˝.
Winner and still NXT Women's Champion: Shayna Baszler

-Storm hobbles her way into the ring only for Baszler to ambush her and reapply the Coquina clutch. I guess Baszler didn't enjoy the count-out win as much as she expected to.

Dunne, as expected, goes right after the wrist of Gibson, and wrenches his fingers back. Gibson rakes the face for an advantage and attempts to stomp Dunne's elbow into the mat. Dunne kicks Gibson's bad arm from the apron, but Gibson trips and hammerlock slams him into the guard rail. Gibson works the arm in the heat sequence in entertaining fashion. Gibson's smac talk lights a fire in Dunne, who counters with a nasty head butt. Dunne strings together a comeback, complete with the X-plex for a nearfall. Dunne is selling his arm as he continues to swing for the fences, hitting a moonsault to the floor. Gibson uses a hammerlock to drive Dunne into the ring steps. Dunne desperately hits a second X-plex on the floor. Interestingly, Gibson recovers from that spot first and fires away with body shots. Dunne symbolically adjusts his mouth guard and returns the favor. They trade enziguris and lariats and both go down hard. They trade head butts in a knucklelock until they both go down. Dunne pops up with a German suplex and Bitter End for a quality near fall. Gibson answers with a Codebreaker and applies his arm crank (Shankly Gates, I think they're calling it). Dunne breaks the hold but Gibson counters with a top rope neckbreaker and reapplies Shankly Gates. Rope break by Dunne, and Gibson's smack talk costs him again, as Dunne wrenches the fingers and nails the Bitter End for the win at 17:45! I am pleasantly surprised by the finish, as I figured they were going to arbitrarily change the title. Fantastic effort and action here, even with a couple of storytelling hiccups along the way, ****.
Winner and still WWE United Kingdom Champion: Pete Dunne

-Triple H, Johnny Saint, and the entire roster join Dunne for a celebration.

Final Thoughts: This definitely had more filler than Night 1, but featured strong opening and closing matches. The U.K. Championship match was definitely enhanced by the careful booking of Gibson during the tournament in how he systematically won by damaging his opponents' arms and quickly winning with the Shankly Gates, only to have Dunne be the only guy who could effectively escape the hold. I have to recommend watching both parts together, but still a Thumbs Up.