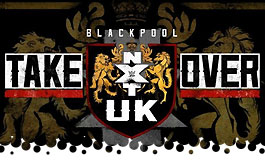 From the Empress Ballroom in Blackpool, England. Our hosts are Nigel McGuinness and Vic Joseph.

I am way behind on the NXT U.K. brand (not from a lack of interest, I assure you) and I'm told this is a tournament finals match. Mustache Mountain are donning red and black British Bulldogs-style attire for this special occasion. The fans love to hate Gibson and mock him with a song as he locks up with Bate. The fans are now holding up their shoes while singing, and I'm equally confused and amused. Is it safe to assume there are adult beverages for sale at the venue? Gibson and Bate reach a stalemate when Bate cleverly bridges his way out of a hold. Tags are made and Drake and Seven trade stiff shots. Bate quickly returns, and Drake needs a timeout. Bate embarrasses Drake with a series of cheeky evasions and counters. Tags are made, and Seven outwrestles Gibson. Mustache Mountain clear the ring with dives, but Seven seems to injure his elbow in the process, to which Gibson takes advantage with a THROAT CHOP! Seven gets beaten up for several minutes, including getting busted open the hard way by taking a lariat to the back of his head. Bate gets a particularly hot crowd and cleans house, placing Drake onto Gibson's shoulders and then spinning them both on his own shoulders! Bate follows by suplexing Drake off the apron onto Gibson. Standing SSP off the apron by Bate and I'm marking out. Seven returns and slams Gibson in place for Bate's diving headbutt (ugh) for only 2. Bate takes Drake out with a suicide dive, and Seven gives Gibson a BURNING HAMMER, but Drake breaks the pin. Bate and Drake trade nearfalls until Bate rolls into a head kick. Gibson blindsides Bate with a Codebreaker, and he and Drake hit a HELTER SKELTER/450 combo but SEVEN KICKS OUT! That was a FANTASTIC false finish. Gibson and Drake apply stereo Shankly Gates, but Bate breaks out with a power slam to save Seven! Mustache Mountain deliver their patented lariat/suplex finisher, but DRAKE KICKS OUT! Bate finds himself on Gibson's shoulders on the floor, for a suicide dive electric chair from Drake! Seven attempts a dive, but Drake counters with a drop-kick! Seven suffers a Ticket to Mayhem and Gibson and Drake claim the titles at 23:47! The fans HATE this outcome, but that's okay because the match was awesome and the champions are BAD GUYS, ****½.
Winners and new NXT UK Tag Team Champions: Zack Gibson and James Drake

Banks catches Devlin with a suicide dive during his entrance. Devlin recovers and sends Banks into the ring steps, which aggravates an existing knee injury. Devin plants Banks' bad leg against the steps and stomps mercilessly. Officials check on Banks while Devlin gloats with a promo. Looks like the match is off, but Johnny Saint and his assistant have a new opponent: FINN BALOR! NO WAY! The fans give Finn a superstar reception and I've got goosebumps.

The fans are still going nuts for Balor at the opening bell. Devlin defiantly palms the face, which earns him a drop-kick and Sling Blade. Devlin rolls out to avoid Coup de Grace and gets brought back in the hard way. Balor hits a running forearm on the floor, but Devlin recovers by kicking the ropes into the groin and bashes him around ringside. Devlin hits a double stomp, but Finn rolls into a drop-kick. Finn's enziguri seemingly sets up Coup de Grace, but Devlin shoves him off the top to the floor. They trade chops, but Devlin nearly steals it with a standing moonsault. Balor hip tosses his way out of an abdominal stretch and returns the favor. They both go down after exchanging Pele kicks, but Finn is up first and builds towards his finisher. Devlin initially blocks, but Finn delivers a reverse Dragon suplex. Devlin answers with a backdrop driver. Finn hits a soccer kick on the apron, but Devlin blocks Coup de Grace for a third time. Devlin nearly steals it with a rope assisted roll-up and Balor blocks a moonsault! Implant DDT by Balor and Coup de Grace FINALLY ends it at 11:44. Really good back and forth display of moves, but the main story was "OMG, BALOR IS HERE!” ***½.
Winner: Finn Balor

The two largest men on the NXT UK roster find themselves on a collision course. Eddie is tall and mean and Mastiff is stocky and maybe too nice? Bell rings and they waste no time trading clubbing blows. Mastiff scores first with a running cross body. Mastiff brings the steel steps into the ring, but Eddie blindsides him with a Singapore cane! A cane assisted Russian leg sweep gets 2 for Dennis. Mastiff blocks a cane shot with his forearm and hits a (gross) head butt before lighting him up with cane shots. Mastiff hits a powerbomb but Dennis answers with a slam onto the steps! Dennis follows with a Razor's Edge counter off the turnbuckles! The crowd sings a song about tables as Dennis props a table in the corner. Mastiff comes back and attempts a suplex off the apron onto the exposed floor, but has to settle for a back drop and back senton instead. Mastiff impossibly springboards off the ropes but Dennis moves out of the way and hoists the big guy up for a driver. Dennis prepares a Razor's Edge through the table, but Mastiff escapes and nails a release German suplex. Mastiff cannonballs Dennis through the table for the win at 10:44. Good big man brawl that took advantage of the stipulation, ***½.
Winner: Dave Mastiff

Video package highlighting Rhea Ripley injuring Toni Storm's back on her way to becoming the first NXT UK Women's Champion. Storm went on to win the Mae Young Classic and become the #1 contender in the process. This sets a great stage of plucky babyface Storm vs. ruthless monster Ripley.

It's kind of cool that in 2019, there are four women's titles floating around WWE and they're all prestigious in their own right. Bell rings and Ripley attempts a bicycle kick, but Storm deflects and takes the fight to the woman she's labeled a bully. A chase results in Storm hitting a nice suicide dive. Ripley recovers and stomps a mudhole into her challenger. Ripley works a body scissors but Storm slugs her way out. Ripley mocks the fans for their continued singing and hits a delayed vertical suplex. Storm does a nice job building sympathy as Ripley works her over. Ripley talks some smack and Storm responds with a (gross) headbutt that leaves both women down. They stumble to their feet for an epic slugfest. Storm wins the exchange and nails rolling German suplexes! Ripley blocks a third suplex but Storm blocks Rip Tide with a body press for 2. They exchange pinning predicaments until Ripley applies an inverted Clover Leaf! Storm counters into an ankle lock! Storm loses the hold but settles for a German suplex with a bridge for 2! Rhea recovers with Rip Tide but TONI KICKS OUT! Storm answers with Storm Zero for a good nearfall. There's a dueling chant as they stumble to their feet for another slugfest. Toni blocks the Rip Tide and grabs the hair to set up Storm Zero for the win at 14:49! The fans give Toni a big pop for the victory and title change! This was just a simple, satisfying story of a likable babyface conquering a tough adversary, ***%fracv34;.
Winner and new NXT UK Women's Champion: Toni Storm

Nigel McGuinness has his own documentary special on WWE Network and that's just amazing to me. I'll always be saddened that he never "made it” on a national stage, but it's rewarding to see him getting recognized for his excellent career now.

Pete Dunne is hitting 603 days as U.K. Champion, so every title defense has got to be taken seriously. Bell rings and Coffey attempts to intimidate via folding his arms. Dunne is a man's man and eagerly locks up. Coffey goes for the wrist, but Dunne throws a punch to the head, which Coffey no-sells. Dunne gets a knee on one hand and grotesquely hyperextends fingers on the other. A chain wrestling sequences results in a stalemate. Dunne scores again with a Regal Stretch. Coffey gets the ropes (which Dunne kicks off) and Dunne looks for a front headlock and fights off Coffey's delayed vertical suplex attempt. Coffey finally breaks free and hits a float over suplex for 2. They head to the floor where Dunne leap frogs off the steps for an enziguri. Coffey rebounds with a power slam onto the ramp! Coffey is now firmly in the driver's seat as he aggressively works over Dunne's back. Dunne grabs Coffey by the nose to escape a bear hug and finds his second wind. Dunne's moonsault to the floor is good! Dunne hits a reverse suplex for a 2 count and it's anyone's contest at this point. Coffey builds some steam and nails a powerbomb for 2 Coffey works a Boston crab and stomps the head, and Dunne appears to be out cold, but gets a desperate rope break. Dunne locks the fingers and they exchange nasty looking headbutts (which I hope are much faker than they look). Snap German by Dunne, Coffey no-sells, so Dunne gets a desperation Koji Clutch! Coffey deadlifts Dunne into a Tombstone position, but Dunne counters into a grapevine ankle lock! Coffey counters into a release German but spears himself into Dunne's knee. Dunne hits the Bitter End but COFFEY KICKS OUT! They head to the apron, where Coffey delivers a sitout powerbomb! They barely avoid a double count-out (which put a scare in the live crowd). Dunne fights from off his back and stomps a hole into Coffey's face. Coffey answers with a decapitation lariat for a great nearfall and they both go down for a standing ovation. Dunne gets an armbar and refuses to let go as Coffey drives him into the corner and hoists him to the top and twirls him around for a super powerbomb!!! That was AWESOME! They have a standoff (to another standing ovation) and duke it out. Dunne almost passes out on Coffey and suffers an electric chair into a German suplex! Dunne counters with a DDT and hits a second Bitter End, but Coffey rolls out of a cover! We're past the half hour mark as Coffey pulls Dunne to the top rope. Dunne awkwardly shoves Coffey backwards for a bad spill to the floor! Dunne pursues but eats a lariat, and a powerslam nearly gives Coffey the title. They return to the top and this time they both tumble off the top, almost as if they were trying to redo a spot and it didn't go as planned again. Oh well, this match still rules. Dunne manages a third Bitter End and Coffey KICKS OUT AGAIN! Dunne locks the arm and snaps fingers until Coffey taps at 34:12! Just when this was threatening to peter out, they ended on a nuclear hot note. There's no better time to have a marathon match full of finisher kick-outs than when a champion is nearing the 2 year mark with his title. I kept expecting this to end at any moment for the final 14 minutes, this was a thrillride, ****¾.
Winner and still WWE U.K. Champion: Pete Dunne

Dunne celebrates and the show is over... but hold on, WALTER IS HERE! He marches to the ring and stares a hole through Dunne as the crowd sings along with his classical music theme song. Coffey returns and WALTER effortlessly kicks him out of the ring. WALTER folds his arms behind his back and puffs out his chest while Dunne bites the U.K. title and challenges him to do something about it. WALTER leaves without any further incident, having made his point, and WWE can just shut up and take my money.