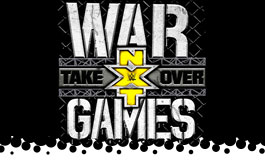 From the Staples Center in Los Angeles, California. Our hosts are Mauro Ranallo, Nigel McGuinness, and Percy Watson.

We kick things off with Matt Riddle coming to the ring and hamming it up with his chillin' stoner millennial gimmick. He says "bro" a lot and this incarnation of Riddle is not going to get over. He's joined by Kassius Ohno, who gets a mild pop for calling Riddle stupid.

Ohno runs into a knee strike to the face and it's over at 0:07. Total waste, bro.
Winner: Matt Riddle

Sane catches Baszler off guard with a running drop-kick and gets a hot start. Baszler's Four Horsewomen cohorts get involved and Baszler aggressively applies a choke hold for the first fall at 2:00. The fans care enough to chant "bullsh!t" as Baszler reapplies the choke. Sane gets the ropes, so Baszler steps on her face while applying a half crab. Sane desperately fights from behind, and counters a DDT onto the ring frame! Sane fights off the Horsewomen and delivers a top rope elbow drop on them all. A salute and flying elbow drop gets Sane a 3 count and it's evened up at 5:11. Sane tries to keep her momentum going with a series of spears. They slug it on on the top rope until Sane reverses into a powerbomb for 2! Alabama Slam by Sane, but the Horsewomen interfere again, prompting Dakota Kai and Io Shirai to make the save. The crowd is still buzzing over Shirai's moonsault while Baszler rolls through Sane's elbow drop for the win at 10:50. Surprisingly short match that provided nonstop action, ***Ľ.
Winner and still NXT Women's Champion: Shayna Baszler

Turns out that lovable underdog hero Johnny Gargano is the rat bastard who beat up Aleister Black last summer and put him on the shelf. Johnny slaps the face at the opening bell, prompting an aggressive flurry from Black. Gargano gets out the way and copies Black's seated pose and is right back in it. Black tries his own mind games by taking a seat, but Gargano just kicks him in the head, as well he should! It's a straight up brawl with spurts of athleticism on display by Gargano, who seems to be relishing this heel turn. Black rallies, hitting a springboard moonsault for 2. Black misses a moonsault to the floor, and Gargano delivers a suicide dive DDT! Back to the ring, a slingshot DDT nearly wins it for Johnny. They trade shots hard shots to the head until Gargano hits a reverse rana, but Black leaps up for a knee to the face! Black strings together a dazzling sequence resulting in a German suplex for only 2! Gargano answers with a hard lariat and applies the GargaNo Escape, but it's countered. Lawn dart by Gargano, who lifts Black up with his foot and signals a super kick, but Black just takes a seat and dares him to bring it on. Gargano misses the kick, but he connects with a running knee for an excellent nearfall! Black wins a slugfest but gets pushed over the ropes, but Gargano dives into a knee strike! Gargano begs for mercy and kisses Aleister's boot, but it was a ploy to block Black Mass and apply the GargaNo Escape! Black escapes and nails a spinning knee! Black holds Gargano up with his foot and delivers Black Mass! A second Black Mass ends it at 18:10. The moral of the story, kids, is don't mess with Aleister Black, who came across as a killer in this one. Fantastic grudge match, though I'm wondering where Gargano goes from here, ****˝.
Winner: Aleister Black

Dream is cosplaying as nWo era Hollywood Hogan, which seems oddly fitting considering recent events. Ciampa clutches the NXT title in his entrance and seems truly concerned about possibly losing it. Crowd chants for Dream at the opening bell and he soaks it in. They exchange holds and Dream plays mind games at every break. Ciampa goes after Dream's headband, prompting a slap to the face. Ciampa steals the headband and imitates Hogan, but Dream ups the ante by going after the NXT title belt! The match restarts with a new sense of urgency. Dream dominates long enough to reclaim his headband, but Ciampa rolls out to avoid a Hogan leg drop, but Dream improvises with a double ax handle to the floor. Ciampa pushes Dream backwards off the turnbuckles and just like that, the champion is in the driver's seat. Ciampa relentlessly targets the head, incorporating his knee brace whenever possible. Desperation neckbreaker by Dream leads to a comeback, complete with a big boot and trio of Hogan leg drops. Dream hulks up and nails a spinebuster for 2. Dream continues to dominate and wraps Ciampa in a figure four around the ring post! That spot is never not awesome. Ciampa taps to the illegal hold, so Dream reapplies the figure four in the middle of the ring! Ciampa escapes and they both go crashing over the ropes in a suplex! Ciampa grabs the tights in a roll-up but Dream blindsides him with a super kick and roll-up for a molten hot nearfall! Dream springboards into a knee strike for another good nearfall. Project Ciampa connects and Dream kicks out! Ciampa grabs the NXT title, leading to a quick Dream roll-up and neckbreaker onto the title belt! Ciampa kicks out and the crowd is losing their collective mind! Ciampa pops up for a draping DDT for another scary 2 count! Ciampa exposes some concrete floor but Dream blocks the DDT and tackles Ciampa over the announce table. Ciampa clocks Ranallo, which allows Dream to quickly set up the flying elbow in the ring and CIAMPA KICKS OUT AGAIN! Dream tries again, but Ciampa sends him flying onto the exposed concrete! Ciampa DDT's Dream onto the steel divider between the two rings and finally gains the pinfall at 22:25. This was an exhausting in the best way as they not only traded finishers, but used their surroundings to earn their nearfalls. This is a great chapter in both Ciampa's title reign and in Dream's emergence as a superstar, ****ľ.
Winner and still NXT Champion: Tommaso Ciampa

The Undisputed Era (Adam Cole, Bobby Fish, and NXT Tag Team Champions Kyle O'Reilly and Roderick Strong) vs. NXT North American Champion Ricochet, WWE U.K. Champion Pete Dunne, and War Raiders (Hanson and Rowe)
Adam Cole starts against Ricochet. Their teammates have to wait in shark cages until their turns, and that's just great. With 5 minutes to fill and they have an aggressive mini-match. They bust out some cool MOVES, including Ricochet's springboard elbow from one ring to the other. Kyle O'Reilly is unleashed, and the Undisputed Era enjoy 3 minutes of a 2 on 1 advantage. Cole drops Ricochet onto O'Reilly's knee as the time expires and Hanson joins the war. With Ricochet down and out, Hanson has to fight off the UE on his own. Hanson runs wild and Ricochet returns for a shooting star press off his back onto O'Reilly. It's an even contest until Roderick Strong is let out and he helps the UE regain control (with particularly vicious backbreakers on Ricochet). Rowe (no relation to your's truly) is released and he joins the match in what is essentially a hot tag. Hanson helps pile UE members onto Rowe for a power slam/powerbomb combo. Cole finds himself alone against War Raiders and Ricochet, and it doesn't go well for him. Bobby Fish is next, but he steals the lock from the referee and puts it on Pete Dunne's cage, and then throws the key into the crowd! Fish brings official Undisputed Era ® chairs with him into the cage and the UE unleash a flurry of chair shots to dismantle their opponents. 3 minutes pass, but Dunne is stuck in his shark cage, so the UE beatdown continues with superplexes. A referee finally thinks of fetching bolt cutters and Pete Dunne is out and storms to the ring. The UE try to hold the cage door shot, but Dunne knocks them away with a kendo stick. The UE are out of rhythm, and Ricochet wipes them out with a top rope dive. Dunne brings in an assortment of plunder from beneath the ring, including a pair of tables! Dunne finally enters the cage and cleans house with kendo shots while War Raiders prop a table between the two rings. War Raiders get a chance to shine as they slam each other onto their opponents. O'Reilly and Fish clock Hanson with a garbage can and pick apart Rowe. Cole and Strong destroy Ricochet with a gutbuster and lungblower. The UE gather around Dunne, who is scrappy but eventually falls to the numbers game. O'Reilly wraps a chain around Dunne's arm and lifts him up awkwardly for a Fish chair shot. O'Reilly looks to submit Dunne with an ankle lock while War Raiders try to make the save. Ricochet springboards in to save Dunne! War Raiders reposition a table, but it buckles when Cole is placed on top. Rowe throws Cole into a Hanson slam, but UE make the save. Fish manages to spear Rowe through the bridged table! Ricochet blocks Cole's superplex through the other table and sets O'Reilly on it, but he gets caught in a triangle choke! Hanson makes the save by splashing O'Reilly through the table! Cole and Ricochet meet on top of the cage for a slugfest. Strong and Dunne get involved and it results in a convoluted, yet oh-so satisfying Tower of Doom that leaves everyone except Ricochet down! This sets up the exclamation point of the match as Ricochet dishes out a 450 splash off the top of the cage onto everyone! Incredible spot, but I hope Ricochet is okay. After a breather, both teams regroup in separate rings, and we have a fresh four on four brawl in between the ropes! Cole finds himself alone with Dunne and nails a string of power moves, but Dunne answers with the Bitter End and Ricochet hits a splash out of nowhere. Dunne and Ricochet both pin Cole for the victory at 47:11! This was maybe a touch too long, but provided plenty of chaos and felt epic. I think the UE probably should have won, but Dunne and Ricochet getting the double pin is a feel-good moment that should also springboard them to the next chapter in their friendly rivalry. All around awesome brawl, ****Ľ.
Winners: Ricochet, Pete Dunne, Hanson, and Rowe

Dunne and Ricochet stand tall with their championships on top of the cage.

Final Thoughts: The second golden age of NXT continues. Not only is NXT the only thing I currently like about WWE, but it's probably my favorite brand in all of wrestling today. Easy Thumbs Up.