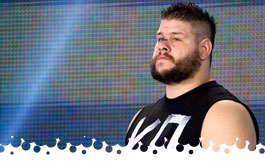 -From Brooklyn, NY, at the freaking Barclays Center, in front of over 15,000 paying customers. The show opens with Triple H in the ring, doing his take on Paul Heyman rallying the ECW troops, but in a cool, modern day setting. Our hosts are Rich Brennan, Corey Graves, and Byron Saxton.

-I don’t want to spend the entire review complaining about WWE Network technical woes, but I have to get this off my chest: it took me at least six attempts to get the VOD stream to work, with repeated logging in and out. I’m not sure why the Network archives has been such a disaster the past couple of weeks but I hope they can get their act together.

This live crowd is beyond jazzed to see Breeze, which will likely be a theme for tonight. The homegrown NXT guys haven’t been seen in person by most fans outside Orlando, so this is a special night for fans and performers alike. A tentative start leads to Breeze resting on the turnbuckles. Liger drops an elbow on the back and mocks Tyler’s pose. Liger controls the action, administering a surfboard stretch and posing for Tyler’s selfie stick. Breeze takes control with a super kick and goes after the back. Liger comes back with a rolling kick and tirt-a-whirl backbreaker, but flies into a raised boot counter. Breeze loses his temper after a 2 count, allowing Liger to nail a somersault plancha off the apron! The Liger Bomb connects for the win at 8:38. Really fun opener, though I’m afraid Breeze is getting typecast as an opening match guy, **˝.
Winner: Jushin "Thunder" Liger

-Kevin Nash, X-Pac, and Scott Hall are hanging out in the front row and no doubt raising awareness for the Kliq DVD.

-Charlotte and Becky Lynch visit Bayley to wish her luck.

The announcers are passing the Vaudevillians off as hipsters now, I guess as a way to defuse how cartoonish their gimmick is otherwise. They reveal Leva Bates, aka Blue Pants, as their secret weapon to neutralize Alexa Bliss, and she gets a huge reaction. If they haven’t signed Leva yet, what are they waiting for? Blake and Gotch exchange holds while the crowd chants “Blue Pants City.” English prevents getting double teamed and nails an impressive double arm drag on Blake and Murphy. Unfortunately, English gets tripped up by Blake on the apron, making him the gentleman in peril. I gotta say, Blake and Murphy look better here than they ever have, delivering a credible looking heat sequence. English gets launched high into the air for a double neck breaker for an impressive near fall. English mule kicks Blake into Murphy and Gotch gets a hot tag! Murphy cuts off the comeback, but Gotch prevents a double superplex, power bombing the champions off the top! Swanton Bomb by English only gets a 2 count! Blue Pants stops Alexa from interfering and they brawl out of the ring. Murphy rolls up Gotch in the chaos for a scary near fall, but the Vaudevillians score the Whirling Dervish for the win and titles at 10:12! These four guys had a hell of a test performing in front of a sold out arena and completely knocked it out of the park with great action and brave spots, ***˝.
Winners and new NXT Tag Team Champions: The Vaudevillians

-NXT Champion Finn Balor arrived earlier with Neville and had a friendly reunion with Cesaro. Oh, and music producer Rick Rubin is in the audience. The stars are out in Brooklyn!

Dillinger’s new “10” gimmick has already caught on if this audience is any indication. Crews gets a nice reaction too, with some fans chanting “Uhaa” to make sure everyone knows how smart they are. Crews shows off with some cartwheels and seems to steal the “10” chant as he hops around the ring. Crews attempts a sling shot and flies into a leaping kick from Dillinger, shifting the momentum for the obligatory heat sequence. Tye gets to look like a serious competitor before Crews lands a leaping enziguri and rolls through a comeback. Gorilla Press by Crews sets up a standing SSP for the win at 4:42. I kind of wish they’d put Crews against someone he could just destroy rather than having a back and forth short match, but this ended up being a nice little crowd pleaser, **.
Winner: Apollo Crews

-William Regal thanks the fans for their support in a backstage promo. He announces the first ever Dusty Rhodes Tag Team Classic, which will culminate at the next Takeover special in October. This is personal, as the NXT roster will be looking to make the late Dusty Rhodes proud.

-The Tough Enough cast are living it up in the front row. I hope they realize how much work they have ahead of them.

Corbin seems to be getting the “right kind” of heel heat in his entrance, not the “you can’t wrestle” treatment. Joe gets a nice pop, but not quite the superstar reaction I was hoping for. Joe aggressively gets the better of Corbin, leading to Corbin taking a breather. Joe drop-kicks Corbin to the floor, but Corbin blocks the suicide dive with a forearm. Joe absorbs some shots, but remains competitive, locking on a half crab. Joe transitions to a crossface and bends Corbin’s arm back in sickening fashion. Baron tosses Joe out, but Joe chops him down via the legs and drives him into the barricade. Corbin surprises with a heel hook! Joe escapes, but Baron hits a nice power slam. Surprise enziguri by Joe leaves them both down. Match restarts with brawling action, culminating in Joe’s swinging back fist. Big boot by Corbin and a suplex gets 2. Joe avoids the End of Days but Corbin improvises with a double arm choke slam. Joe surprises with the Coquina Clutch for the win at 10:21. Solid brawl and a good display of power moves. Easily Baron Corbin’s best match to date, **˝.
Winner: Samoa Joe

-Ric Flair, Sgt. Slaughter, and Kanna (huh?) are sitting together in the front row. Meanwhile, Tamina and Naomi are in tow to watch their Team B.A.D. cohort, Sasha Banks, compete.

-Stephanie McMahon comes to the ring, raising my internal warning alarms. She puts over this historic night for NXT as well as the Divas revolution that’s been taking place. She introduces the video package for Banks vs. Bayley.

Banks rides into the arena accompanied by security guards. I’ve said it before and I’ll say it again: Sasha Banks has been my favorite WWE performer this summer. Like Joe earlier, Bayley gets a really nice pop, but not the high-level superstar reaction I was crossing my fingers for. Both women get a mixed reaction during in-ring introductions. Match begins with an intense brawl of all things. Bayley gets fired up and places Sasha in a tree of woe for a springboard elbow drop! Leaping arm drag by Bayley sends Sasha to ringside while the horrid “Sasha’s ratchet” chant has made it’s way to Brooklyn. Bayley drop-kicks around the ring post and avoids Sasha’s double knee spot, but Sasha kicks her off the apron to take control. Banks is unable to hit her double knees again, so she improvises by setting Bayley on the top ropes and connecting with knees to the gut! Sasha talks too much trash and gets kicked in the face, leading to an aggressive Bayley comeback. Banks cuts her off by forcibly removing Bayley’s hand brace and slams it on the steps. She wedges Bayley’s hand behind the steps for a nasty kick and Bayley sells it like death. Sasha pops the crowd with a diving plancha! Sasha looks to wrench Bayley’s wrist off the top rope but gets shoved to the floor. Bayley makes a clubbing comeback, smartly avoiding using her injured hand. She suplexes Sasha into the corner, tightens the ponytail, but Sasha counters with knees to the wrist and Bank Statement! Bayley reaches for the ropes but Sasha repeatedly stomps the hand! Bayley reverses the hold! Sasha gets the ropes and a Belly to Bayley suplex only gets 2! This gets a well deserved “This is awesome” chant. Sasha blocks a top rope hurricanrana and Bayley takes a rough landing. Sasha drives her knees onto Bayley off the ropes for a convincing near fall! Bayley manages a reverse rana off the top rope! Belly to Bayley finishes at 18:11! WHAT A MATCH! A tearful Bayley is handed the Women’s title and she loses her composure as the fans give the match a standing ovation. This match is everything I love about wrestling: a likeable, heroic babyface squaring off against a dastardly heel for a championship that matters, with high stakes action and surprises along the way, ****˝.
Winner and new NXT Women’s Champion: Bayley

-As if Bayley’s special moment couldn’t be any more awesome, Charlotte and Becky Lynch join the celebration. ALL THE FEELS! Sasha recovers and joins the curtain call, giving the “Four Horsewomen of NXT” a defining moment.

As expected, Balor enters in full demon body paint and make-up and the live crowd is beyond eager to play along with his arm waving. Owens hilariously watched the entire sequence slumped over in a chair by commentary. Owens sets the tone with a shove and tries to flee for a ladder, but Balor keeps the fight in the ring. Kevin takes control with a back senton and sets a methodical pace. Balor surprises with a double stomp, but Owens rebounds with the running cannonball. The fans sing “Ole” for Sami Zayn (the main reason why NXT can sell out an arena if you ask me) and Balor connects with the Sling Blade. They head to the aisle to fight for possession of a ladder, with Owens driving one into Balor’s midsection and teasing a running high spot, but faking the fans out with a basic kick instead. They brawl into the crowd, where Balor reverses a suplex over the barricade. Owens trips Balor on the rail and tosses him over the announce table! Owens gets a second ladder but Balor drop-kicks it into him off the table! Somersault plancha by Finn buys him time to climb the ladder, but Owens cuts him off. Owens eats a Pele Kick and plays possum to lure Balor into a clothesline. Finn gets draped on the ladder for another back senton. Balor reverses with a back drop onto an open, sideways ladder! Owens pushes Balor into a corner ladder but misses a running cannonball! Finn nails Coup de Grace but his climb is cut off by a modified pop-up power bomb! Owens climbs but Finn tips the ladder over, sending him crashing into the turnbuckles. Finn blocks a ring frame power bomb and scores a soccer kick, but misses a double foot stomp. Owens tries again and power bombs Balor onto the ring frame. Owens gets tipped over in another climb but lands on his feet for a super kick. Owens bridges a ladder between the turnbuckles and standing ladder, and pulls Balor up for an apparent superplex. Balor blocks and Owens takes a bump onto the bridged ladder. Balor can’t quite reach the belt so he settles for a COUP DE GRACE FROM THE TOP OF THE LADDER! Finn repositions the ladder and easily retrieves the NXT title at 21:34! This was more of a crazy brawl than spot-fest and they pulled out all the stops. This was missing the emotional punch of the women’s match, but is a worthy ****Ľ main event in it’s own right.
Winner and still NXT Champion: Finn Balor

Final Thoughts: The biggest show in NXT’s short history lived up to all expectations and completely showed up Summerslam. NXT is a blueprint for how to book and promote wrestling in 2015 and every time I think it’s peaked, they find a way to become even better. Big Thumbs Up.