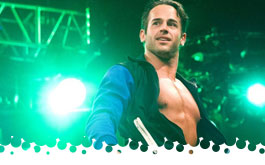 - Today marked the 2-year anniversary of NXT shows coming to the Venice area. Advertised in the days leading up to tonight across social media were Kassius Ohno, The Authors of Pain, The Velveteen Dream, Sonya Deville, and Kimberly Frankele. Ohno and the AOP were not here, which was a bit of a disappointment (I've grown used to this, since an NXT show doesn't come and go without at least one notable bait-and-switch). Also notable is the first appearance in Venice of the new, Female referee, the former Kennadi Brink.

We arrived right as the entrances started, but were delayed because we had issues with our tickets (we bought the "gold circle" seats, instead of general admission, and had to find the right section of seats to have people removed, but done nicely). Back-and-forth action, with the highlight being Cutler at ringside selling everything that happened to Blake. Miller ended up pinning Blake with his back suplex into a sit-out Powerbomb at around the 11:00 mark. TM-61 have been off TV for months with Thorne's injury, and this is the first time I recall seeing them on a live show since.

Jaoude and Bononi haven't had any impact on television yet, so this doesn't look promising on paper, but Jaoude is used regularly on these shows, so the local audience responds to him well. Bononi not so much, greeted with "intelligent" chants of "Salami Bologna". Short match, nothing really wrong with it, but nothing to really highlight, either. Lots of arm work tonight in every match. Jaoude won in about 7:00 with an over-head lift and slam (think the spot that counters a triangle choke).

Mary Kate made her first appearance in Venice as a mysterious muscle alongside Lana last month, and formerly worked in Impact Wrestling as Rosie Lottalove. Sarah Bridges is the former Crazy Mary Dobson, and I guess Venice didn't get the memo her name was changed, again, to Sarah Logan. Sonya Deville is formerly known as Daria Morgandorfer. Crowd was into Morgan, Kimberly, and Rose, with little reaction to Mary Kate. Solid action, with Rose and Sonya working most of the match for their team. Finish came with Liv alone in the ring with Mary Kate, while the other four women brawled at ringside, and Mary Kate finished her with a Side Slam at the 11:00 mark.

- Lars Sullivan came out for an interview. Crowd heckled him tons, but he kept his composure the whole time, ripping his shirt to show off his physique, and briefly turned babyface by threatening to end John Cena's career before turning heel again by claiming he'll one day headline WrestleMania.

– Babatunde is a green giant, about 6'8" and 350 pounds. Former football player in Poland, and a cup of coffee in the pre-season for the Minnesota Vikings in 2015. Fulton returned to Venice last month, and it doesn't appear like his character has any connection to Sanity, but that can always change. Babatunde has mostly done squash matches, so this being a bit back-and-forth was a surprise. They kept this short, too, and Babatunde eventually finished with a side-winder into a back breaker at the 7:00 mark.

– I'd say it must be intentional where they put Lorcan in with someone with the physique of a guy like Sabbatelli, but then that seems like almost every match. Tino has a great look, and a pretty good entrance, but damn if the match doesn't die once the bell rings. He' stopped doing the "make it rain" gesture since fans want him to do it, so brownie points for actually being a heel who doesn't try and play babyface. All the goodwill is out the window when he spends about 8-minutes working basic wrist-locks and chin-locks. Lorcan didn't get much offense, most of it coming in the closing moments, and finished Tino with a running Blockbuster at the 10:00 mark. Easily the worst match of the card for a longer.

Intermission! Let's all go to the lobby and get ourselves some snacks.

The Street Prophets vs. The Ealy Twins

The Street Prophets are Angelo Dawkins (an NXT veteran of quite a few years) and Montez Ford (who comes across like a Chris Tucker personality. Loud and annoying, but charming, I guess). The Ealy Twins have made appearances here and there, but on TV, probably only have one notable moment where Samoa Joe beat them both up at the same time. Shorter than usual outing from Ford and Dawkins, who cut out all their match lengthening shenanigans. The Ealy Twins took control with the old switch-a-roo. Dawkins got the hot tag and cleaned house, finishing with a spear and Ford coming off the top with a frog splash, at the 8:00 mark.

Blair's gimmick is that she has a really, really, long ponytail/weave that she can use as a whip, rope, or other form of gimmickry. This was a pretty basic match, but the crowd seemed really into Evans, but also appreciated the uniqueness of Blair's hair attacks. Evans eventually won via submission with a Fujiwara armbar at the 9:00 mark. I wouldn't technically call it good, but it was enjoyable for what it was.

Roderick Strong vs. The Velveteen Dream

Main Event of the Night. I was expecting a 6-Man at this point since we hadn't seen Ohno or the AOP, but we got this as a singles match, instead. Crowd seemed really into jeering the former Patrick Clark, who has improved quite a bit from what I remember this time last year. The "Dream" often managed to slip out of harms way, playing to the crowd on the floor, to avoid damage. He hit Strong with the flying elbow drop, but only got a near fall. At this point, it looks like Strong got color, but I don't think it was hard-way. A friend I went with pointed out he did something with his wrist-band, so probably a blood cap was used. Strong finished almost immediately after with his vertical suplex into double knees at the 13:00 mark. Best match on the show, and again, Clark/"Velveteen Dream" has come a long way.

Final Thoughts: When Gold Circle seating is $20 and General Admission $10, it takes a lot for a show to not be considered worth the price of admission (yes, there's been at least one show in Venice I felt like wasn't worth the money). You're not going to get a laundry list of stars featured on TV, unless you're outside the local market. We typically get the same rotating roster, with a few of the "bigger" names occasionally peppered here and there. Only one match is what I would consider bad, but at least it was only 10-minutes. NXT returns to Venice on August 12th, weird since they almost always run monthly shows.