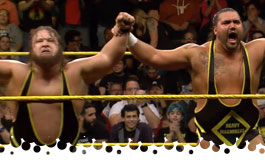 - Full crowd of about 300 people. It's the usual group of fans in the first few rows that you see every time, so at least there's local loyalty. This happened to be a much better crowd than the last show I've been to, which definitely helps when the "bigger" stars are shipped across the country for a more important tour. Side rant: What kind of merchandise stand DOESN'T offer 2XL shirts at a wrestling event? Not to be that guy, but there were a lot of big guys (and gals) there, and no way are they squeezing into small and mediums. I wanted to purchase a DIY shirt, but it was not to be tonight.

Really? Interesting decision to put Ohno, the most established name on the card, in the opening match. He also worked the match without a top on, and we can draw out own conclusion from that. They spent the early moments trading arm work and strikes. Jaoude controlled with an arsenal of rest holds and occasionally throwing Ohno around with arm drags. Ohno made a quick comeback, finishing with a running boot and a discus forearm at 7:30. Solid effort for an opener, but not the best use of Ohno and his star power (NXT star power, that is).

Sneak preview of Lana's Smackdown Live gimmick, where she does a dance in the aisle (with a chair of course), and milks the entrance for a good while. She was accompanied to the ring by "Mary-Kate", who previously worked in Impact Wrestling as Rosie Lottalove. There were a few spots where Lana looked a little light with her work, but much better than I anticipated, and Kimberly did a good job in carrying the match. Mary-Kate was a nuisance at ringside and created the distraction that allowed Lana to finish Kimberly off with a modified T-Bone Suplex at 6:00. Better than it had any right to be.

- Christy St. Cloud (newest robot for the WWE's hosting duties making her Venice debut) interviewed Chinese newcomer Yunbo Wang. He cut a promo in broken English, but quickly got over his dad called him "boa" and he urged the fans to call him that as well. While Wang played to the crowd, Sawyer Fulton ran in and laid him out, finishing with a choke-out submission hold. He still looked dressed up like a member of Sanity.

Welcome to repackaging #4 for Wesley Blake (we've quickly moved on from "Beautiful Blonde Blake"), teaming with the former Marine. Matching outfits usually means bigger things, but we're long removed from the days of Blake and Murphy. Otis Dozovic spent a lot of the match hooting and hollering from the apron, getting the crowd going. His height might be an issue, but he has the charisma to get over. Tucker Knight... well, he takes a decent beating for a man his size. Blake and Cutler got their token offense, but Otis got the hot tag and Heavy Machinery finished with their new double team spot (Knight comes off the ropes to splash across the back of Otis, while Otis is holding his opponent) at 7:00. Mostly one-sided, but Otis was one of the highlights of the show and had the fans going crazy.

Murphy's latest gimmick is that he's NXT's Best Kept Secret™. He's a good worker, it's just a shame he doesn't seem on the path to anything beyond mid-card NXT work at the live events. Williams had as short of a NFL career as you can have, missing his rookie season after being drafted and never catching on out of Pre-Season. His inexperience was obvious, doing mostly punch and kick while jawing with the front row fans. Finish seemed to come out of nowhere. Shortly into Murphy's comeback, he planted Williams with a slam and sat across his chest, hooking the legs, for the finish at 8:00. It definitely caught everyone by surprise when you've come to expect a big finishing move. Worst match of the night, but it wasn't a negative star match.

Everyone got separate entrances, with Swann coming out last to probably the best reaction of the night. The guy has such a contagious energy it's hard not to get into what he does in the ring. Thankfully, no Alicia Fox (clearly no one expects her on the NXT shows, but still, no Alicia is a good move). Metalik worked the first part and had a hot crisscross sequence with Nese before playing face-in-peril. Ali got the hot tag and ran wild before being knocked into the guard rail, and it was his turn to get the heat until making the real hot tag to Swann. It turned into a wild affair with everyone being thrown out of the ring until it came down to Swann and Gulak, ending with Swann hitting the second rope Phoenix Splash at 14:00. Very good match with a solid showcase of athleticism from the baby-face side. Easily the best match of the show.

- INTERMISSION! I give it my lowest rating yet... seven thumbs up.

This would be my first time seeing Blair, whose gimmick is undoing her hair to reveal that it's almost the entire length of her body, and uses it as a weapon to whip her opponent(s). Sarah Bridges is probably easily recognized by the name "Crazy Mary Dobson. I wasn't expecting much from this coming in, but it turned out alright. Liv Morgan seemed a lot smoother here than from what I remember on NXT television, and Rose, while not a technical wizard, performed well and didn't look like an embarrassment to the sport. Morgan took a beating for a while and Sarah got the hot tag, running wild on Blair and Rose. Morgan was still hurt on the floor for the finish, when Rose hit her with the Angel's Wings (sit-out double under-hook face-buster) and Blair held Morgan back from breaking the cover. Match went about 9:00. Perfectly acceptable but forgettable action.

Poor Kona Reeves. Last time I went to the Venice show, he was still known as Noah (just Noah), and was squashed in unspectacular fashion by Jeet Rama. Reeves comes to the ring with some kind of undefined gimmick. At first I thought it was a baseball bat, but then his gimmick is he's from Hawaii, and that doesn't seem to fit the profiling of people from the islands. He attempted to hit Babatunde with it, but the referee pulled it away from him. Babatunde threw him around a lot, with Reeves' only offense being desperation sleeper holds that were quickly shrugged off. Babatunde finished with what was basically a double under-hook suplex at 3:30. Didn't we just see a similar move end the previous match? Probably the worst match for in-ring quality, since it was a (unimpressive) squash.

Yes, this was seriously identified as our MAIN EVENT. The Prophets are Angelo Dawkins (Mr. Stirring It Up) and Montez Ford and I guess Dawkins turned babyface since he stunk up the Community Center with Sabbatelli a while back. Sabbatelli had a more successful career in the NFL than Williams, spending several seasons with the Buccaneers and Chiefs before retiring. Ford spent the first few minutes being loud and obnoxious, dancing, and basically being a modern version of Chris Tucker. He also worked most of the match, seemingly being the new version of Enzo, getting his butt whooped for what felt like forever. Moss and Sabbatelli looked smooth and do more double team work, but they definitely don't stand out for their work, only for their bodies. Dawkins eventually got the hot tag, and in the only awful spot, whiffed on a dropkick by several feet that Moss sold regardless. Finish came with Moss missing a charge to the corner, Dawkins taking him over, and Ford finishing with the Frog Splash at 16:00. Solid, but unspectacular. Would've been better to have swapped places with the Cruiserweights.

Final Thoughts: An entertaining two hours of NXT action. Only one match really stood out for the in-ring quality, but nothing was bad, and the matches deemed the worst of the night had something going for them (good crowd) or were short enough (Poor Kona) to not bring down the rest of the show. Had they flipped the schedule around a bit to have a stronger finish to the show, it would've ended on a higher note, but the match that closed it out had the crowd hot, mostly due to Montez Ford's antics. It stinks that split shows means the local fanbase gets the lesser of the two rosters, but they gave us mostly faces from TV and workers who have been used regularly when the shows come to Venice.