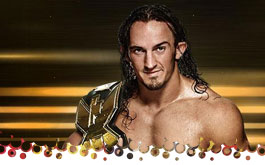 - Last week on 205 Live, Neville made his in-ring debut for the show, teaming with THE Brian Kendrick to defeat TJ Perkins and Cruiserweight Champion Rich Swann to further prove he's the King of the Cruiserweights™... Noam Dar continues to be smitten with Alicia Fox, cheesing off Cedric Alexander (shoot me)... Ariya Daivari scored his second victory on 205 Live and continues to have issues with Jack Gallagher... Drew Gulak is a crybaby as he loses yet another match.

- Presented on the WWE Network from Chicago, IL. Mauro Ranallo, Corey Graves, and The Greatest Man That Ever Lived (Austin Aries) are calling the action, unless otherwise noted. Tonight's Main Event is a Non-Title Match between the Cruiserweight Champion, Rich Swann, and the King of the Cruiserweights™, Neville.

Poor Alexander, being saddled with this nonsense. Nice to see Gulak and Nese continue to back each other despite endless jobbing. With Alexander clearly on a path to feud with Noam Dar, I'd expect him to go over or for Dar to cause a distraction at ringside. Lockup, Alexander goes to work on the arm. Crisscross and Alexander with a sunset flip for two. He takes Nese over with a handspring head scissors and connects with a dropkick for two. Nese sends Alexander into the corner and shoves him to the floor. Back inside, Nese comes off the top rope with a missile dropkick for two. Alexander teases a comeback, but Nese lays into him with leg strikes, followed by a leg sweep for two. Alexander fights free from a body scissors, but Nese transitions into a rear chin-lock. Alexander boots Nese out of the corner and runs over him with forearms. Whip to the ropes and Alexander with a handspring roundhouse kick. He takes a trip to the high rent district and hits a springboard clothesline for two. Nese gets the better of a counter exchange and cradles Alexander for two. Gulak and Fox start arguing, leading to Fox's boot coming off because she apparently doesn't know how to lace them. Gulak sells being hit, causing her to be ejected. Meanwhile, the distraction buys Nese time to recover and KO Alexander with a palm strike for three at 6:02. Nese finally wins a match! Good until the ridiculous finish.

- Backstage, Noam Dar presents Alicia Fox with some mistletoe and gets slapped for it. He seems to enjoy it, though, and tries again, with the same results. I never understood allowing palm strikes with the intent of hitting someone as hard as possible, regardless of gender. Seems like it could cause some head trauma just as easily as a slipped worked punch, but what do I know, I'm just a wrestling fan.

- Rene Young sits down for an interview with Neville. She asks him about joining the 205 Live roster, but he immediately turns it into your typical promo about how Americans are xenophobic and afraid of people different from them. Just because he talks a little different, he's looked at like a weirdo, and when he outlifts people twice his size at the gym, he's gawked at like a freak. He was left out of the Cruiserweight Classic because it wouldn't have been a competition with him involved, and promises to take his frustrations out on Swann, who he said was once his Young Boy in Japan and isn't at his level. Would that be the Neville Level™?

Yurnet is one of those "already in the ring" talents used to put someone over without sacrificing someone on the regular payroll. After only one prior appearance, they introduce Ali from Chicago, IL to get the hometown pop. I guess that makes him a babyface this week. Yurnet appears to blow his knee out in the opening seconds of the match throwing a boot and is barely able to move around on his right leg. The referee constantly checks on him and on commentary they talk it up like he's hurt (or playing opossum). After some basic exchanges, Ali connects with an inverted DDT and finishes at 2:06 with an inverted 450 Splash that Austin Aries dubs the 054. Did Aries seriously get to name the move? He IS the Greatest Man That Ever Lived™.

- Post-match, Mustafa Ali talks about his character's motivation once again about being judged by his name, but moving forward, he's going to let people judge him based on every win he picks up on 205 Live. Hopefully, next time we see Ali, they move forward with consistency instead of another instance of peddling backwards and having him heel it up again.

- Hype video for Ariya Daivari, who says he's already surpassed his brother's accomplishments in WWE (not hard to do) and we transition into a recap of his rivalry with Jack Gallagher, who this past Monday on Monday Night Raw, challenged him to a Gentleman's Duel, complete with a glove slap across the face.

Round 3 of their wars on 205 Live, and hopefully their last in-ring interaction for a long time. Daivari comes out in his wrestling gear, but Gallagher comes out in his suit. I mean, it's a DUEL, not a wrestling match, so points go to Gallagher for being properly attired for the occasion. There's a table in the ring with various items, like a candlestick, noose, lead pipe and wrench... what is this, a recreation of the game "Clue"? As I say that, Gallagher says the candlestick is from his friend "Col. Mustard." Gallagher lets Daivari choose his weapon first: the lead pipe. Gallagher takes the umbrella. They'll take 10... scratch that, 5 paces and turn to engage each other in combat. Daivari tries to cheat, so Gallagher low blows him and smacks him across the head. Daivari pushes the table into Gallagher to take control and stomps him down in the corner. He picks up the wrench, but Gallagher hits him in the midsection with a headbutt and connects with the running corner dropkick. Gallagher is announced as the winner by forfeit. This was goofy, but entertaining.

Non-Title Match, of course. Week 5 of 205 Live and Swann has competed in the Main Event on all of them thus far. It could be worse, it could be week after week of Gallagher vs. Daivari. Swann isn't doing as much dancing as usual for this one. Swann refuses to offer a handshake and attacks with rights. Whip to the ropes and Swann with a diving forearm. Neville bails, with Swann right behind him to connect with an uppercut. Crisscross and Swann with a dropkick, sending Neville to the floor, again. He teases a high spot, but Neville rushes in with a forearm. Neville sends Swann to the floor, introducing him to the barricade and the LED screen along the side of the ring. Neville launches himself for a twisting pescado, mostly missing Swann. Back inside, Neville covers for two.

Back inside, Neville charges into the corner with a forearm for two. Neville slows things down with a chin-lock. Swann fights free with strikes to the midsection but gets caught with a tilt-o-whirl back breaker. Neville with a standing Shooting Star Press for two. He comes off the top with a missile dropkick for another two-count. The crowd taunts Neville with a "U-S-A" chant, so he goes back to the chin-lock. Swann surprises Neville with a hurricanrana, sending him out of the ring. Swann with a kick to the face and modified Phoenix Splash to the floor. Back in, Swann with a spinning super-kick to the midsection, followed by a Tiger Bomb for two. Neville uses the tights to throw Swann out of the ring and connects with a step-up enzuigiri. Swann sneaks back in with a Super-Kick and hits the Fantastic Voyage (spinning Michinoku Driver) for a near fall. Neville catches Swann in the corner with a boot to the face but misses a twisting 450 splash. Swann with a Super-Kick for two. Swann makes a trip to the top rope, but Neville interrupts his progress. Swann ends up fighting Neville, but not for long, as Neville straddles him across the turnbuckle. Neville with another step-up enzuigiri, followed by a Super-Plex for three at 13:55. One sided-match for the first half, with Swann putting up a valiant fight before falling just short. Good enough to make you want to see an immediate rematch between the two. ***1/2

- Post-match, Neville continues to punish Swann with leg strikes and a dead-lift release German suplex. Neville hits a seated Swann with a pair of Super-Kicks before several more officials come to ringside and restore order.

Final Thoughts: Neville is unofficially crowned the new #1 Contender with his victory over Rich Swann. Between that and defeating TJ Perkins on Monday Night Raw the previous night, he's already gone over the two top babyfaces in the division. Elsewhere on 205 Live, Alicia Fox continues to get focused on the show centered around a division she doesn't belong to. At least Jack Gallagher's comedy was actually funny, which is against the usual mantra of WWE comedy ("funny" storylines that nobody but one person laughs at).