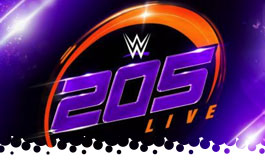 - In the beginning, the idea of a show dedicated to the Cruiserweights seemed a bit farfetched due to Vince McMahon's history of not promoting them well enough and presenting them as inferior to the "real stars" of the company. Despite the success of the Cruiserweight Classic, there wasn't a heck of a lot of optimism about the concept, even in 2016, years after the last attempt at a Cruiserweight Division was attempted and with a strong list of talented workers to center it around. Before 205 Live premiered, we were treated to TJ Perkins, the inaugural Champion, being presented as a Video Game Nerd (he wasn't Angry, at least), and looking like a complete chump in his short-lived program with The Brian Kendrick.

- Live from the University of South Carolina, Mauro Ranallo, Corey Graves, and "The Greatest Man That Ever Lived" Austin Aries are at ringside to call the action, unless otherwise noted. [That combination didn't last for too long, with Ranallo's sabbatical early in 2017 and Aries eventually being part of the roster in time for WrestleMania.] They hype THE Brian Kendrick defending the Cruiserweight Title against Rich Swann.

- Introducing the Superstars of 205 Live!

- Hype video for The Bollywood Boyz, Harv and Gurv Sihra. They've got the Bollywood Flavor™ and have been influenced by guys like Bret Hart and Chris Jericho. They talk about their Grandfather who is blind, and how he was able to listen to them make their debut in WWE. Weird that the first act they introduce on 205 Live is a brother tag team, and neither of them had much of a run in the Cruiserweight Classic. About 5 months later, they were repackaged on Smackdown Live as Sunil and Samir Singh.

What a match to kick off the era of 205 Live. NO REACTION to the Shira brothers entrance. Unlike Gulak and Nese, they at least got an entrance. We surprisingly get handshakes at the start. Nese sneak attacks Gurv but can't keep control and is quickly double-teamed in the corner. Whip to the ropes, double hip toss, followed by a double basement dropkick for two. Gulak tags in and walks into an arm drag. Nese with a distraction, allowing Gulak to nail Harv with a shotgun dropkick. Gulak with a slam into the ropes. Nese with a charging elbow before hooking a body scissors. Gulak with an Indian Death Lock. Harv counters a suplex with a neck breaker and hot tags his brother. Gurv comes in with a double axe-handle and lays into Gulak with chops. Contrived spot where Gurv causes a chain reaction ending with Gulak hitting his own partner with a DDT. Crossbody press on Nese gets two. Harv with a twisting Asai Moonsault on Gulak. Nese takes out Gurv trying to fly and gets a near fall from it. Gurv makes his own comeback, and a double Super-Kick to Gulak finishes at 7:03. Good enough match. The one complaint that seems to be misguided is that the Cruiserweights offense looks a lot like most of the regular roster. Well, yeah, guys like A.J. Styles and Seth Rollins.

- In a post-match interview, Drew Gulak calls the Sihra's the Bollywood Bozo's and says Bollywood isn't even a real place. Nese blames the ring being faulty and calls them Dancing with the Stars rejects.

- Hype video for Noam Dar. He was the youngest performer in the Cruiserweight Classic and is always looked at as an underdog despite being a 9-year professional. Nicknamed the Scottish Supernova, there's not much to say about him. Is being a good wrestler a character?

- Tom Phillips catches up with Brian Kendrick for comments on tonight's Championship Match. Kendrick says if Tom were a gambling man, he'd bet on him. TJ Perkins enters the scene to remind Kendrick that he's owed a rematch. He's hoping Kendrick wins just so he doesn't fall out of the title hunt. Babyface TJ Perkins is kind of dull.

- Hype video for Gran Metalik. COMING SOON... but we just saw him at the top of the hour!

Yes, Daivari is related to the Daivari from the mid 2000's that managed Muhammad Hassan, among others. Aries says Gallagher has Rollie Fingers' mustache and Casper the Ghost's tan. Another match with a handshake. I'm sure that aspect from the CWC went by the wayside quickly. Gallagher twirls out of a hammerlock and stretches Daivari out. Whip to the corner, Gallagher head-stands on the turnbuckle to fluster Daivari. Gallagher with a leg sweep and ties Daivari up in a spot that belonged on Saturday Morning Slam... what do you mean you don't remember that show? It was awesome! In a spot straight out of the Popeye movie, Gallagher readies himself and punts Daivari right in the rear. Daivari surprises Gallagher with a knee and connects with a neck breaker for two. Gallagher rallies with a pair of dropkicks, followed by a body press for two. Daivari with a discus forearm and Gallagher responds with a headbutt. Gallagher with a running dropkick into the corner, and that does it for Daivari at 5:31. Mostly comedy, but Gallagher at least has a personality and character that can be expanded. 18 months later and Daivari is in the same spot he's been since the start.

- Hype video for Lince Dorado, "The Golden Lynx", whose wrestling style is Lucha Libre, but with a hybrid of other styles.

Not to be a jerk, but Kendrick looks like some homeless guy fighting for a sandwich. Immediately after Kendrick's entrance, we get a hype video/sob story for Swann, and if that doesn't telegraph the finish, I don't know what does. Swann credits wrestling with sending him down the right road in life after losing both his parents at a young age. He pinned TJ Perkins in a Triple Threat Match to earn this title match. Another clean handshake? CLEAN SWEEP.

Lockup and Kendrick grabs a hammerlock. Swann escapes and grabs a side headlock. Crisscross and Swann connects with a dropkick for a one-count. Kendrick counters a headlock with a twisting back suplex and levels Swann with a running boot to the face. Swann with chops and a double under-hook slam. You know what move needs to make a comeback? The Pearl River Plunge. Kendrick with elbows to the back of the neck. Swann counters Sliced Bread #2 with a victory roll, but they end up in the ropes. Kendrick bails and Swann follows with a baseball slide. Swann hops onto the barricade and somersaults off across Kendrick. Back inside, Swann unloads with rights, but once again, Kendrick takes him down with a side suplex. Kendrick hooks the Captain's Hook, but Swann makes it to the ropes to force the break. Swann lands on his feet on a full nelson slam attempt and dumps Kendrick on the back of his head instead. Kendrick regains control, hitting a neck breaker across the turnbuckle. They tease the count-out, as if they'd ever pull the trigger on that spot. Kendrick with a snap suplex into a cover for two. Kendrick with a Full Nelson Suplex. Swann blocks the Captain's Hook, so Kendrick audibles with a straight-jacket chin-lock. Swann comes back with a sit-out Exploder Suplex for two. Swann with a roundhouse kick. Kendrick gets the knees up to counter a standing 450 and cradles him for two. Kendrick with the Captain's Hook, and again, Swann gets to the ropes. Kendrick with Sliced Bread #2 from the top rope for a near fall. Well, that killed the regular finishing move too. Swann with a trio of spinning heel kicks (think Aleister Black's Black Mass) for three and the Cruiserweight Title at 13:25. Good match from a technical aspect, but I personally couldn't get into Kendrick's offense. ***

- Rich Swann with a post-match interview, thanking his mother who is with him in spirit. Well isn't that nice.

- Tom Phillips catches up with Brian Kendrick in the aisle. This was supposed to be the biggest day of his life. He didn't lose, he was robbed. He blames TJ Perkins for getting in his head before the match.

Final Thoughts: For a premiere episode, it could've gone worse. They tried to introduce as many of the men on the roster as they could, but most of them lack personalities or characters to get behind. What is Noam Dar fighting for, or what makes him unique? His thick accent? Tony Nese is the "Premier Athlete" but looked average against the Shira Brothers, doing little to stand out as someone to keep your eye on. You see where I'm going with it. As far as work is concerned, it was good enough, and I see plenty that they can build on, so we'll see where things go next week.