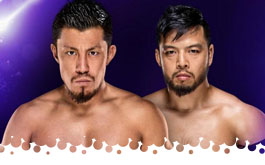 - Last week on 205 Live, I decided to skip the show because it was mostly non-cannon to the on-going storylines, where UK talent were mixed into matches with the regular roster. Instead of moving forward with something interesting, like a teased 205 vs. UK scenario, it was just matches with everyone blended together with no rhyme or reason. We did get the WWE TV debut of a very posh looking gentleman with an Evel Knievel helmet, so there's our highlight from an otherwise forgettable episode.

- Presented LIVE on the WWE Network from Worcester, MA. Vic Joseph, Nigel McGuinness, and Percy Watson are calling the action, unless otherwise noted. Hideo Itami vs. Akira Tozawa hype video opens the show for us. Don't forget, NEXT WEEK Cedric Alexander defends the Cruiserweight Title against Buddy Murphy, but we'll hear from both competitors tonight to tease us for their big showdown.

With all the momentum they've given Gulak, it really makes the result of the Alexander/Murphy program unpredictable. We see a previously recorded promo of Gulak, promising to take apart the Lucha House Party, and prove that you can flip and dive, but if you step to Drew Gulak, you will tap out. Metalik is looking for redemption for Kalisto, who suffered a loss at the hands of Gulak several weeks ago. Before the match begins, THE Brian Kendrick and Jack Gallagher make their way to ringside to join the commentary team. Lockup and Gulak immediately takes control with a side headlock. Whip to the ropes and Metalik with a shoulder tackle. Crisscross, Gulak springs off the ropes to take Gulak over with an arm drag and knocks him to the outside with a dropkick. He teases a dive but Gulak slides back into the ring, citing a "No Fly Zone." Metalik with a roundhouse kick and springboard missile dropkick for two. Gulak meets an elbow charging into the corner but has enough whereabouts to straddle Metalik across the turnbuckle. He traps Metalik in the tree of woe and stomps away at the midsection. Kalisto and Dorado try to rally the crowd with their noisemakers and it fails horribly. Back inside, Gulak ties Metalik up in the middle of the ring, hooking a combined arm-bar and ankle-twist. Whip to the ropes and Metalik comes back with a spinning head scissors. Gulak avoids the handspring press and boots Metalik into the corner. Did Gallagher just call him Gran Metallica, and say he liked him until he became too commercial? WONDERFUL. Metalik with a missile dropkick for two. He bitch-slaps Gulak from the apron and hits him with an Asai Moonsault. Back inside, a springboard splash gets two. Gulak with a discus clothesline, turning Metalik inside-out for two. Metalik knocks Gulak down in the corner with a Super-Kick. He climbs the corner across the ring, walks the ropes half-way and hits a dropkick for two. Gulak escapes the Metalik-Driver but gets taken over with a victory roll for two. Gulak with a counter for two. Metalik meets the knees going for a lion-sault, and the Gu-Lock finishes at 8:12. Dead crowd, good work. The never-ending story of 205 Live. ***

- Hype video on Buddy Murphy. Nobody trains harder than he does, and next week, he's going to be the bigger, faster, and stronger athlete, and that's something Cedric Alexander hasn't dealt with before. Ever since he's come to 205 Live, he's beat everyone that stood in front of him, and you can't stop the unstoppable.

- Akira Tozawa is warming up backstage.

What a boring name for the enhancement talent. TJP is once again lost in limbo, so he gets the token showcase match in the middle of the show. They show a tweet from TJP asking for a spot on the Smackdown Live roster. Guy has a gaudy color scheme for tights, boots and knee pads. TJP with a headlock takeover into a hammer-lock and some arrogant taunting (cough:dab). TJP with a spinning head scissors into a snap arm-bar. Whip to the corner, snap suplex, and back suplex. TJP hits a somersault senton as Drake Maverick watches backstage. Guy fights off the shoulders and hits a dropkick. TJP rolls through a sunset flip and hits a basement dropkick. He turns Guy over in a reverse Scorpion Death-Lock and stomps his face into the canvas. Detonation Kick finishes at 2:30. TJP continues to be one of the best workers on the roster.

- Dasha Fuentes is in the ring for an interview with TJP about his comments on social media. He says he wasn't just the first Cruiserweight Champion, but the best, he's the best wrestler in the world, and single handedly revived the Cruiserweight Division. If Guy was the level of competition he deserves, then it's crystal clear what management thinks of him.

- Social media buzzed about matches between Cedric Alexander and Mustafa Ali on the latest European Tour. No image of Ali needing his head stapled shut after one of those matches?

- Pre-recorded interview with Cedric Alexander. Alexander says pressure means nothing to him. Next week, he's in his home state of North Carolina, with friends and family there to watch him to defend the title. He says there's no way he'll fail in front of them. Alexander reminds us he's cut weight just like Buddy Murphy to qualify for the Cruiserweight Tournament. He says Murphy hasn't adjusted as well as he and Alexander promises to expose that.

Who could've seen this friendship/alliance blowing up in their faces so quickly? No, I'm not pointing both my thumbs at myself. These two formed a half-decent tag team, but miscommunication was there down fall. That and Itami not respecting anyone else. That youngster has a lot to learn. Both men strike with boots to the face at the bell. Itami gets the better of a fisticuffs exchange. Whip to the ropes, Tozawa rolls through a sunset flip. Both men avoid kicks and return to a neutral stance. They trade chops next. Tozawa hits the surprise right jab to end the sequence and stomps Itami down in the corner. Snap mare and running kick to the chest, followed by a jumping senton for two. Scoop slam for two. Itami escapes a chin-lock with a jaw breaker. Tozawa keeps the pressure on, laying into Itami with more chops. Whip to the corner, Itami back drops Tozawa to the apron. He plants a pair of kicks to the left arm and comes off the ropes with a knee across the back of the head.

Itami with a swinging neck breaker for two. A baseball slide sends Tozawa to the arena floor. Itami follows, throwing Tozawa into the barricade. Back inside, Itami slows things down with a snap mare. Whip to the corner, Tozawa greets Itami with a boot, but immediately gets nailed coming off the middle rope. Whip and Itami with a running knee to the midsection. Itami taunts Tozawa, booting the back of his head and mocking his signature rally-grunt. Whip and a second knee followed by knees across the forehead. He pulls down the pad and teases it a third, but casually brushes him in the face with his boot. Itami with a DDT for two. Tozawa escapes the chin-lock with elbows. Whip to the ropes and Tozawa counters the knee with a roll-up for two. Tozawa with a jumping head scissors and a modified Shining Wizard. Tozawa goes to the top for the senton but Itami rolls to the floor. Tozawa audibles, hitting Itami with a rolling senton from the apron. Back inside, Tozawa hits a missile dropkick for two. Itami hangs Tozawa up across the top rope and hits a flying clothesline for two. Itami with a series of palm strikes. Tozawa fights out of the Rings of Saturn and cradles Itami for two. Tozawa with an inverted roundhouse kick. He goes to the top for the senton but Itami straddles him across the top turnbuckle. Itami climbs up with him, setting up a Super-Plex. Tozawa with a series of blows to the back to escape Itami's grip. They go back and forth until Itami hits a Super-Falcon Arrow for a near fall (of course). Itami comes off the ropes with a running knee strike for two. Tozawa traps Itami in the Octopus Stretch. Itami gets to the ropes, pulling himself to the floor. Tozawa follows with a tope suicida. Back inside, Tozawa climbs to the top again, and on the third attempt, the Senton meets nothing but canvas. Itami with the running basement dropkick in the corner. He hits it a second time for good measure and hits the twisting knee strike for three at 15:17. I guess the GTS is banned again. Good match, but the middle segment was perfectly phrased as "methodical." ***1/4

Final Thoughts: The big picture continues to be Cedric Alexander defending the Cruiserweight Title against Buddy Murphy. It seems like they're doing a short-term angle with Drew Gulak targeting the Lucha House Party, going back to his "No Fly Zone" gimmick, minus the comedy. Itami and Tozawa put on a solid Main Event, but you'd expect them to have a non-finish to drag it out a few more weeks. I don't know what is going on with TJP, but it would be interesting if they teased moving him to a non-Cruiserweight spot.