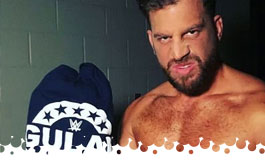 - Last week on 205 Live, Lince Dorado and Gran Metalik defeated Hideo Itami and Akira Tozawa in a hard-fought Tornado Tag Team Match... Buddy Murphy didn't make weight, so it's announced that a Gauntlet Match will determine the challenger for Cedric Alexander at Greatest Royal Rumble... The Brian Kendrick and Jack Gallagher beat a pair of scrubs... Mustafa Ali defeated Ariya Daivari to keep his name relevant amongst the top contenders on the 205 Live Roster.

- Presented LIVE on the WWE Network from Louisville, KY. Vic Joseph, Nigel McGuinness and Percy Watson are calling the action from ringside, unless otherwise noted.

- Tonight's Gauntlet Match will feature the likes of Mustafa Ali, TJP, Kalisto, Drew Gulak, and Tony Nese. The show opens with the big announcement and each superstar cutting quick selfie-promos to hype the big match.

Winner receives the title match against Cedric Alexander at Greatest Royal Rumble. Mustafa Ali (with Glacier inspired outfit... and yes, I know it's "Be the Light", but it looks like Glacier) and TJP start. This should be a great way to kick things off. They jockey for position and TJP dabs while giving a clean break. Ali grabs the arm while TJP hangs onto the taunt for too long. TJP with a big sequence to escape, only to get taken over with an arm drag and trapped in the arm-bar. Crisscross and TJP with a rolling cradle. They trade counters for one-counts, including trading leg sweeps. Ali rolls through a sunset flip, flips back over as TJP covers up, and connects with a basement dropkick to the back of the head. To add insult to injury, he dabs, then knocks TJP out of the ring with a spinning heel kick. Crisscross and Ali with a push-off dropkick, sending TJP back to the floor for a breather. Ali brings the fight, only to get the arm snapped across the top rope. TJP keeps him trapped in the ropes, trapping him in an Octopus Stretch. TJP with a triangle dropkick, knocking Ali to the floor. Back inside, TJP with a senton for two as we get a split-screen interview from Cedric Alexander. TJP with a straight-jacket surfboard. Ali rolls through into a cover for two. TJP throws him into the ropes and hits a Russian leg sweep for two. Whip to the corner, Ali avoids a charge and comes off the ropes with a hurricanrana. Ali with a clothesline and elbow, followed by the rolling X-Factor for two. TJP counters a suplex but gets rolled up for two. TJP pushes Ali off the top and comes down with a missile dropkick to the knee. He slaps on the Knee-Bar, but Ali makes it to the ropes to force the break. TJP goes for it again but Ali fights free with right hands. TJP drives him into the corner. Ali fights him off and springboards off the top rope with a Tornado DDT. He goes to the top rope and hits the 054 for three at 9:47.

Drew Gulak is the next man out, and it seems like Mustafa Ali is easy pickings for the Submission Specialist. Gulak casually pursues and gets cradled for a one-count. Gulak slams the legs of Ali into the ropes, sending him to the floor, clutching the left knee. Gulak follows him out and gets taken down with a drop toe hold. Back inside, Ali comes off the top with a body press, but Gulak rolls through and turns Ali over with a single-leg crab. Ali kicks free and cradles him again, this time for two. Gulak with a short-clothesline, turning Ali inside-out. Gulak busts out a modified Stump-Puller as we get a split-screen advertisement for GRR. Whip and Gulak with a one-man flapjack for two. Ali keeps fighting, but Gulak targets the leg each time to cut him down. Ali slips out of a slam and goes for the hurricanrana, but Gulak turns it into the single-leg crab. This time he sits down with it, but Ali rolls through again. Ali with an enzuigiri to break Gulak's grip. Gulak counters the rolling X-Factor with a Powerbomb and goes to the single-leg crab for a third time. Gulak sits to the side this time and hooks the arm. Ali does his best John Cena impression to never give up and gets to the ropes, again. Gulak taunts Ali as he wraps the leg around the top rope. Ali smacks him upside the head, slams him face-first to the canvas, and traps him in a crab while tangled in the ropes. Gulak falls to the outside and Ali follows him with a flying body press. Back inside, Gulak clips the knee. Ali counters the Gu-Lock with a roll-up for two. Ali with the springboard Tornado DDT, but he can't climb the ropes for the 054. He keeps going up and gets thrown to the floor, crashing face-first against the ring steps. Gulak throws him back in the ring and hooks the Gu-Lock. He's out, so the referee calls for the elimination at 22:43.

Tony Nese is the 4th competitor, and he doesn't waste time counting his abs this week. He sweeps Gulak off his feet and lays into him with rights. Gulak tries to bail but Nese pulls him back to the center of the ring and stomps him out like a small fire. Whip to the corner and Nese with a back drop. Nese with a series of leg strikes and the no-hands twisting plancha. Nese throws him into the security wall and gives him a bit of payback from the tournament by throwing him over the announcer's table. He tosses him into the side of the table as the referee gives up on counting them out. If they Double CO, does that mean Kalisto wins by default? Back inside, Nese runs through Gulak with a diving elbow. Gulak rolls away from the handspring moonsault. Nese follows him to the floor and lays him out with another forearm. Gulak grabs the beard to cut off Nese's trash talking. Nese stomps him down in the corner and hits the running knee but chooses not to cover. Nese drags him back to the corner and pulls the knee pad down ("you deserve this"). Gulak rolls away from the knee and locks on the Gu-Lock for the submission at 30:36. Congratulations Nese, you are a total geek. The crowd chants "You tapped out!" forgetting that he's the babyface and Gulak is the heel.

Kalisto is the 5th and final entrant for the Gauntlet, fighting a man who has gone through 20-minutes of punishment. WWE really has a hard time booking babyfaces and heels properly (sometimes). Gulak takes a breather on the table. Gulak continues to play keep himself away, frustrating Kalisto. Kalisto avoids a sneak attack and sends Gulak to the outside with a dropkick. Kalisto follows, landing a jumping roundhouse kick. Kalisto with a wrecking ball dropkick. He goes for a tope suicida by Gulak side-steps, sending him crashing into the wall. Dasha Fuentes is with Tony Nese backstage as Kalisto milks the 10-count. Nese is at a loss for words. Gulak goes for the Gu-Lock, but Kalisto scurries for the ropes. Gulak with a snap suplex into the cover for two. Gulak with clubbing forearms across the side of the head and shoots the half for a one-count. Kalisto with blows to the midsection to escape a chin-lock. Gulak runs into a boot and gets taken over with a spinning head scissors. Kalisto with a Super-Kick, but the Tornado DDT is countered. Gulak with the Gu-Lock but Kalisto uses Gulak's momentum to send him to the corner and finishes with the Salida del Sol for three at 39:24. Lince Dorado and Gran Metalik come out with noisemakers to celebrate his victory. Kind of a flat finish to what was three good falls prior. I'm someone who rates the match as a whole, not for the pieces, since it's technically one long match, and I thought it was a great match that could've stood for a little rebooking for the finale. ****1/4

- Cedric Alexander comes out to applaud Kalisto for his victory. What a nice guy.

Final Thoughts: The entire episode was dedicated to the Gauntlet Match, and it was 40-minutes of great wrestling, so you can't find a reason not to watch. The booking of the match though, was a bit suspect. It started fine with Ali playing the plucky underdog, but then you have Gulak playing the iron man, Tony Nese looking like a total geek, and a babyface winning where the heel is presented as the underdog fighting for his life.