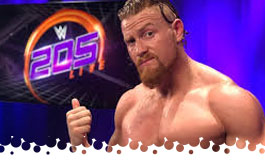 - Last week on 205 Live, Mustafa Ali defeated Drew Gulak to earn a spot in the Finals at WrestleMania, where he'll face Cedric Alexander to crown the NEW Cruiserweight Champion... Lince Dorado and Hideo Itami's match was thrown out when tempters flared, but Kalisto and Tozawa's calm-minded attitude earned them a show-case opportunity this week against TJP and Buddy Murphy.

- Presented LIVE on the WWE Network from Pittsburgh, PA, with Vic Joseph and Nigel McGuinness calling the action, unless otherwise noted. We open the show with quick promos from all four men involved in tonight's featured attraction.

Drake Maverick joins the commentary team for this one. Andrews had a decent showing in the Tournament, defeating Akira Tozawa but losing to Drew Gulak. Nese also lost to Gulak, in a far more brutal contest. Even though Maverick chewed Nese out for his obsession over his physique ("congratulations, you have abs!"), he still points them out to us on his way to the ring.

Lockup and Nese with a waist-lock takedown. Andrews with a waist-lock into a side headlock. Nese counters with a head scissors and drives Andrews head-first into the canvas during an escape attempt. Nese comes off the ropes with a shoulder tackle. Crisscross, Andrews flips out of a snap mare attempt, and takes Nese over with a deep arm drag. Meanwhile, Drew Gulak is watching, and it seems like the winner will get a chance for redemption against Mr. Gulak sometime soon. Nese catches Andrews with an elbow across the jaw. He does the nip up evasion and lays into Andrews with leg strikes. Andrews flips through a sunset flip and hits a basement dropkick for two. Nese blocks a monkey flip out of the corner but meets a boot. Andrews' teased tope is countered with a charging elbow for two. Hard whip to the corner and Nese locks on a body scissors. Andrews stacks Nese up for a pin attempt, but Nese keeps the hold applied. Nese with a running knee to the midsection for two. Andrews with a 6-1-9 to the midsection, followed by a somersault into a bulldog. Double knees in the corner. Nese catches a moonsault, but Andrews turns it into a DDT for a near-fall. Nese bails and Andrews follows with an Asai Moonsault from the middle turnbuckle. Back inside, Nese knocks Andrews across the top turnbuckle, punts him into a fireman's lift, and connects with a stomach buster for two. Whip and a hard clothesline turns Andrews inside out for two. Andrews fires back with rights but a leg sweep cuts him off. Nese follows him to the floor and clobbers him with a left forearm smash. Nese misses a springboard moonsault. Andrews with the E. Honda hand-slaps and a step-up enzuigiri. Nese with a roll-up, but it's countered with a victory roll into a double stomp for two. Andrews counters a pump-handle slam with the stun-dog millionaire (that name sucks, BTW), and finishes with a Shooting Star Press at 11:18. Good work that lacked crowd heat until the end. I don't dig Andrews' character, but it's hard to ignore his work. ***1/4

- Drake Maverick lets Mark Andrews know from ringside that he'll get to face Drew Gulak next week on 205 Live. Dasha Fuentes catches up with Drew Gulak backstage (who is stroking his beard like a Super-Villain). He says he may have hurt Andrews' feelings for locking him in a submission hold longer than he needed, but it was a statement, because he's the best submission specialist in WWE. "If you step to me, you will tap out."

- Buddy Murphy is backstage working out, while TJP is chilling out on the stairs, sipping a beverage and scrolling on his phone.

- Drake Maverick with a pre-recorded interview with Tournament Finalists, Cedric Alexander and Mustafa Ali. It'll be their first WrestleMania, and it's friends competing for the Cruiserweight Championship. Alexander plans on making his 4-year old daughter proud by walking out of WrestleMania the Champion. Ali brings up Alexander's history of losing when he's had title opportunities. He says Alexander writes the same story, and his pen always runs out of ink. Ali says he has a daughter too, and he has a story he needs to write, too. They're going to tear the house down, but the story ends over his (Ali's) head. He asks what Cedric is willing to do to change that story. Cedric is willing to sacrifice his body and will have to stomp out the heart of 205 Live to do it. Ali says that's exactly what he's going to have to do, and they share an awkward handshake.

- Kalisto is loosening up with the Lucha House Party while Hideo Itami yells at Akira Tozawa to hype him up for tonight's Main Event, which is coming up NEXT.

Kalisto vs. Akira Tozawa vs. Buddy Murphy vs. TJP:

Last week I incorrectly stated this would be a #1 contender's match. It was implied, but not formally announced. Tozawa and Kalisto come out unaccompanied. Murphy weighed in at 203 lbs. "last night", so they're continuing the making weight story with him. Kalisto goes right for Tozawa. Murphy joins the party, while TJP hangs back. Kalisto knocks Tozawa to the floor and follows with a somersault senton. Meanwhile, TJP continues to relax. Murphy sneaks back in to make him get physical. Crisscross and Murphy with a head scissors, sending TJP to the floor. Kalisto in with a springboard corkscrew. Tozawa sweeps the legs of Kalisto and hits a jumping senton for two. TJP negotiates with Murphy to work over Kalisto. TJP turns on him almost immediately, stomping him down in the corner. He sends Murphy into the post, knocking him out for a good 2-3 minutes. TJP continues to dominate, throwing in a dab for good measure while holding submissions on Kalisto AND Tozawa. Kalisto comes back with chops while Tozawa is still trapped in a standing Indian Death-Lock. TJP with a Northern Lights Suplex for two, and now the hold is finally released.

TJP boots Kalisto out of the ring and walks into an angry Murphy. He lays TJP out with a pair of clotheslines, followed by a running leg lariat. Murphy dumps TJP, then Kalisto. He follows, throwing Kalisto a bit harshly into the security wall. He runs wild on all three opponents at ringside. Kalisto and Tozawa work together to send him into the barricade with a double hip toss. They argue before hitting TJP with a double mid-section super-kick. TJP recovers in the ring, hitting Kalisto with a clothesline. TJP with the Gory Special on Tozawa while turning Kalisto over with full body stretch. He lets go, focusing on Tozawa with a Cloverleaf. Murphy in with a boot to break the hold. Kalisto comes off the ropes with a Tornado DDT on Murphy. Tozawa with an enzuigiri, and now all four men are down.

TJP with a springboard dropkick to Murphy. Tozawa dumps him and hits a full-speed tope suicida. Kalisto follows with a corkscrew tope con hilo. Murphy, not wanting to be left out on the fun, hits a tope con hilo, as well. Murphy rolls Kalisto back in the ring, only to get shoved down from the top rope. Tozawa climbs, but Kalisto has recovered by this point and straddles him across the turnbuckle. TJP returns to tease a Tower of Doom but ends up sweeping Kalisto off the ropes. He applies a bow-and-arrow. Murphy crawls between for a cover, and Tozawa hits the entire stack with the Drop Zone Senton for a near fall. Tozawa lays into Murphy with chops and a straight right. Murphy rallies with a series of leg strikes. Kalisto steps off Murphy to hit Salida del Sol on TJP. Tozawa tries to steal the cover, but Kalisto breaks the count. Tozawa and Kalisto brawl and each get dumped by Murphy. TJP with a leg trip into the Knee-Bar, but Kalisto and Tozawa both save. Murphy hits both with a corkscrew plancha. He counters the Detonation Kick but gets taken over in a victory roll for two. Murphy catches TJP off the ropes and finishes with Murphy's Law (modified Angle Slam) at 13:37. The streak of strong Main Events continues. Decent crowd heat (for 205 Live standards) and great work from bell-to-bell. Murphy was the one needing the win the most, and they went with the right choice. ****

Final Thoughts: Only two matches this week, but both were given a decent amount of time considering it's a show that only gets 45-minutes, plus we got a solid face-to-face with the babyfaces competing in the finals of the Cruiserweight Championship Tournament. Next week we have Drew Gulak vs. Mark Andrews' Rematch to look forward to, and don't think we won't see something between the Lucha House Party and Itami and Tozawa.