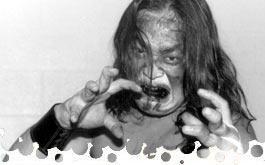 We're finshing up the "David Von Erich Memorial Parade of Champions", yet we're also dealing with the fallout from the event. In fact, tonight's main event has no less than a rematch of Ric Flair vs. Kerry von Erich, in a non-title match. Marc Lowrance is once again filling in for Bill Mercer. But with so much going on in World Class Championship Wrestling, let's get down to ringside for...

This should be the final DVE Memorial match to air, as we're once again at Texas Stadium. With Lowrance on commentary, we've got a non-regular announcer, Raplh Pulley, who announces Kimala and Akbar as Kabuki's "challengers" instead of opponent and manager. Kabuki's announced as "the greatest martial arts master in the world" and twirls around some nunchaku to a noticeable pop. Bold prediction: THAT is about as technical as we'll get in this match. It's basically heel vs. heel, but the lead-up to this had presented Kabuki, a longtime World Class bad guy, in a favorable light. Lowrance does a great job of building up Kabuki's "three masks"- his giant headress, then his hair, then finally his face paint "to cover up the scars from the melting pot". Kabuki gives a ceremonial green mist SPEW before the bell. As you'd expect, it's a buncha' chops and chokes, with Kimala dominating the early portion. Kabuki gets in some jumping reverse thurst-kicks to at least slow down the big guy. A Bearhug Happens, courtesy of Kimala. Kimala with the dreaded Pectoral Nerve Hold for several minutes, so Hart gets in AKbar's face to keep the crowd entertained. MILD "Go, Kabuki, go" chant, which is always a sign that someone might be a babyface. Hart starts brawling with Friday, tossing him into the ringpost, then rolls into the ring with Akbar. Brawling, all around, as it's a double disqualification. I guess Hart and Kabuki are potential faces, simply because they're not pals with Akbar.

Back to the ol' stomping grounds of the Sportatorium. Strongbow is a newcomer and this is one of his first televised World Class matches. Kiniski attacks after refusing a handshajke, elbowing Storngbow into the corner, then getting a 2 count from a reverse neckbreaker. Slam, but Kiniski misses a legdrop for Strongbow to take over. Strongbow does the usual dance and chop, then hits a backdrop and hooks a stepover toe hold into...the Indian Death Lock, which gets the quick submission win. Kiniski throws a fit, claiming he didn't give up. Quick match, but it did its job.

Back from commercial, Lowrance interviews Akbar in the aisle, wondering about an "altercation" that occurred backstage between Kimala and Kabuki. Akbar simply says "money talks" and blows off Lowrance's inquiry.

Fans are clapping along to "Badsteet USA", as the odd Devastation/Freebirds feud continues. Lowrance gives us some awesome backstory on Khan-- when Terry Gordy was in "the Orient", he went to the top of a mountain to see an old man who taught him the Oriental Spike. Khan is the one who lead Gordy to that mountain top! SD1 locks up with Roberts, who easily slams him. Gordy comes in for an almost comical criss-cross (no JUMP JUMP, though). Khan comes in, screaming, to jab SD1. Things get out-of-control, as Gordy's out on the floor with a chair, smacking somebody. Meanwhile, the SD's choke Hayes to the mat. Lowrance gives us an update that Kimala was injured in that backstage incident. Hayes gets clubbered by all 4 bad guys, until he blocks a flying forearm from SD1 and makes the hot tag to Gordy, who brings a bucket and mop to clean house. All 8 men start brawling and everyone's disqualified. Freebirds and Khan clear the ring and stand tall to a big ovation.

Marc Lowrance has a pre-recorded ringside interview with the NWA World Champ, Kerry Von Erich. Kerry's obviously reciting lines, but the gist is that Texas is his home.

Non-title match, as you could sorta' score this an encore or "victory lap" for Kerry. Chance for the Sportatorium faithful to see their new champ and cheer him on. It's also a "revenge match" for Flair. I'm guessing this was taped a few days after their big Texas Stadium match, while Flair was still in town. Everything Kerry does makes the fans go nuclear, including a hammerlock reversal to the mat. Flair suckers him into an armbar, but Kerry rolls forward and delivers a drop-kick. Kerry with a discus punch, allowing Flair to sell his usual dazed look. Flair lifts Kerry into the corner for some chops, shots to the forehead, then tosses him to the floor. Flair cuts off his return attempts, until Flair brings him in for more pummeling. Irsih whip reversal and Kerry hooks the sleeper. Flair breaks with the kneelift and is back to chopping and stomping. Flair goes for the figure four, but as he bends over, Kerry grabs him with the IRON CLAW! Flair breaks it, hits the ropes, but gets planted with a press-slam. Discus punch gets 2, then both guys trade blows. Flair hits the ropes, but Kerry rolls him up for 2, then a backslide for another 2. Flair then targets the left knee and shin, eventually cinching in the figure four leg-lock. Kerry powers over, reversing the pressure--- honest question: has anybody, anywhere, won a match with a figure-four reversal submission? Another press-slam from Kerry, this time with an 8 second air time. Flying bodypress from Kerry looks sloppy, but gets 2. Flair whips him in for a hip-toss, but Kerry counters into almost an abdominal stretch and takes him to the mat for the 3 count! Animated shoving match, afterwards, as Flair is really pissed. Kerry knocks him to the floor, as Flair threatens to use a chair before leaving. Just as good as their Texas Stadium match. Whereas the crowd ballistic for the ending at Texas Stadium, here they were ingited for the entire match. They could've just gone out there and done the same match, but they mixed it up and it seemed a little more intense. Great job by both guys.

Why'd You Watch This?:
No surprise, but this is another essential episode with a legitimate "Double Main Event". No wasted time at all. They're clearing teasing something with Kabuki and Jules Strongbow was introduced with a good impression. It's also weird to see the on-again/off-again "Freebirds as Faces". I'd even say that this is in the Top 10 of all-around favorite World Class episodes that I've ever recapped.