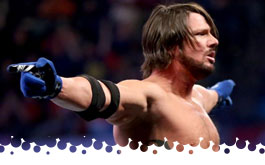 Another year has come and gone, and 2017 isn't much different than any other of the recent years from WWE. You had some good stuff, and a lot of great wrestling, but the lack of attention grabbing storylines, and the burial of some "smark" favorites definitely left a bad taste in the mouths of a lot of the fans. We'll look back at mostly the positives of what WWE had to offer, but we'll kick it off with a few awards that nobody wants to receive.

Kill yourselves. Each and every one of you.

Tell me if you've heard this one before... Alicia Fox is limited to Main Event/Superstars duty for an endless period of time before being briefly pushed ahead of pretty much everyone else with actual wrestling talent. Her gimmick? She goes crazy and annoys people. This should sound familiar, because they already did it a few years ago! Maybe I should've changed this to "laziest repackaging" and awarded it to the creative staff. Runner up? Emma, who's transformation to Emmalina literally lasted all of 4-minutes before disappearing again and coming back as the same Emma she was before her back surgery (oh, and then she was fired).

When 2016 wrapped up, one of the more interesting angles developed on Smackdown Live was the unlikely alliance between Randy Orton and Bray Wyatt. Adding to the intrigue was Randy Orton winning the Royal Rumble, and a month later, Wyatt winning the WWE Title inside the Elimination Chamber. Then it fell apart. Orton revealed his true intentions ("I'm coming for you Bray! I'm coming for your title) before burning down the sacred resting place of Sister Abigail. The two would go on to have easily the worst match at WrestleMania, "highlighted" by projection of stock footage bugs on the canvas. Then they managed to have an even worse match that just couldn't do anything right. They brawled inside a low-budge horror house, including attempted homicide via refrigerator. Then they came to the arena to little fanfare, and had a boring wrestling match (on top of the unexplained transportation of Orton arriving at the same time as Bray), capped off by interference from soon-to-be WWE Champion Jinder Mahal.

I give this warning every year, but this isn't like late 90's WCW or mid 2000's Smackdown where you can pick and choose several shows that were drizzling poop, so we'll find the show that offered the least and didn't even deliver on those expectations. Headlined by Jinder Mahal and Randy Orton inside a Punjabi Prison, the HGHLIGHT was a surprise appearance by the Great Khali. Scared yet? The show actually opened strong, with one of the countless good/great matches between New Day and the Usos, but it was downhill from there. Shinsuke Nakamura and Baron Corbin laid an egg, A.J. Styles and Kevin Owens had their worst match ever (at a "low" **1/2), the non-Champion women did another sloppy elimination contenders match, Cena and Rusev had a 25-minute wanker fest called a flag match, and Sami Zayn and Mike Kanellis were bathroom break duty. Still better than Great American Bash 2004.

Comeback Superstar of the Year: Goldberg

This award is generally reserved for either a returning superstar, a superstar coming back from injury, or coming back from years of not being pushed. Since the strongest return from injury case came from Seth Rollins, and his 2017 hardly set the world on fire (despite his entrance music suddenly telling us to burn it down), Goldberg gets the cheap nod for having a compelling storyline with Brock Lesnar and squashing Kevin Owens in 20-seconds for the Universal Title at Fastlane. Leave it to a lukewarm Monday Night Raw making us want more Goldberg, but we haven't seen him since WrestleMania 33, and who knows if we'll see him again.

Tag Team of the Year: The Usos

Despite WWE's poor attempts at keeping tag teams strong, one team stood out among the rest of the field. While Breezango captivated audiences with their comedy, the shelf-life of such a gimmick is only so long, and they were still presented as comedy wrestlers who often were assigned to the JTTS role. The New Day still have their moments, but lost steam. Raw's only strong team from beginning to end has been Sheamus and Cesaro, but the team that really stood out among the rest is the revival... of Jimmy and Jey Uso. After suffering through injury lapses and fan backlash, the Usos reinvented themselves, showing off their charisma through stronger promo work, while having some of the better matches on the roster, including a lost-gem on the Kickoff Show at SummerSlam. Beginning 2017 as heels, the Usos got over with audiences, organically turning them babyface again, and this time without the baggage of being on the same show as Roman Reigns.

I'm not going to lie... this category didn't have much depth. Obvious choices aside, Alexa Bliss has been the most successful and received a sustained push to go along with that success. Charlotte Flair, the front-runner in the eyes of most fans, was put on the back burner for half the year, lost in the Smackdown shuffle. Bayley was completely buried, and Sasha Banks has been a victim of 50/50. Even further down the list, what has Naomi or Natalya done to really earn the nod? Even Asuka has had so-so run on the main roster since exiting NXT after Takeover Brooklyn. Alexa Bliss won several Women's Championships, from both the Raw and Smackdown brand, and has remained a steady presence at the top of the division.

Make that two years in a row now for Styles as the top male on the WWE roster, even with being dropped down the card to feud over the United States Championship with such luminaries as Baron Corbin and Tye Dillinger. Beginning and ending the year as WWE Champion, Styles has remained one of, if not the, best performers on the roster, male or female, and has been the top performer on most of the PPV's featured on, ranging from "special attraction" guys like Shane McMahon, vanilla slugs like Jinder Mahal, and the obvious quality with John Cena. He even delivered in last-second fill-in duty at TLC, pulled from a tour of South America the day before the event. This was a no brainer choice, and if I had to find anyone to call a distant second place, it may have been Braun Strowman, but the gap between Styles and everyone is so far, it doesn't even matter.

Is there any surprise that one of the NXT specials took the honors? If you want to find the best main roster show, I guess I'd recommend WrestleMania 33. WarGames not only delivered an outstanding main event, the kind of cluster-f*ck you need when you have nine guys inside of a double cage, but featured two great matches underneath, with Andrade Almas winning the NXT Title from Drew McIntyre, and Aleister Black and Velveteen Dream over-delivering on modest expectations. Even matches filling out the card, a semi-squash for Lars Sullivan over Kassius Ohno, and Ember Moon winning the Women's Title in a 4-Way featuring Kairi Sane, Nikki Cross, and Peyton Royce, had their place. Hell, the DARK MATCHES were pretty good too, including a great match between Johnny Gargano and Pete Dunne, and a solid effort between Sonya Deville and Ruby Riot.

NXT: The Authors of Pain vs. #DIY vs. The Revival; Takeover: Orlando

If I missed anything in the honorable mentions, its because the WWE has literally produced so many great matches over the last year, I couldn't keep track of all of them. As far as the Main Roster is concerned, there was no doubt that Styles vs. Cena was the best match of the year, but when it came to NXT, I had to think it over a bit, undecided between my eventual choice and Dunne vs. Bate from Chicago. The deciding factor? Emotion. DIY and Revival losing to the AOP was so disappointing, not because my favorites lost, but because I was sucked into the story of the match and genuinely was upset about the loss, not because of who won it. As great as Dunne/Bate was, it lacked the emotional investment despite being one of the best worked matches from a technical stance.

Final Thoughts: That wraps it up for 2017. I don't know about anyone else, but I'm looking forward to the 51 Network Specials of 2018. Who knows, maybe I'll actually watch more than one episode of 205 Live before we roll the calendar over to 2019. I have nothing witty to add here, so I'll close it out like I always do. As much as there is to complain about when it comes to the WWE product, there's still some good stuff to enjoy, and you never know when something will click.

back to OTHER Reviews Index