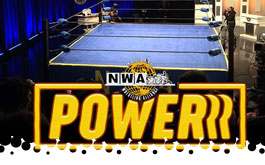 From GPB Studios in Atlanta, Georgia. Our hosts are Joe Galli and Jim Cornette.

David Marquez hosts Colt Cabana at the desk. It's great to see Colt flourishing with a consistent babyface push, especially after seemingly being put out to the pasture on ROH programming. Colt is ready to main event this show like a main eventer when he faces James Storm for the National title.

Recap of Ricky Starks stealing a victory over Aron Stevens.

David Marquez hosts Aron Stevens at the desk. Stevens orders silence from the fans before dismissing his loss to Starks as a fluke, due to ring rust. Crowd chants "You got beat" so Stevens calls them insolent knaves. Stevens claims to have recently discovered himself to be a descendant of Wiliam Shakespear and has a script that will allow him to quit wrestling for Hollywood once and for all. Stevens is my new favorite.

Nick Aldis pimps RetroMania Wrestling, a new wrestling game with a pixelated, 80's feel. It's coming soon to all major game consoles and features NWA stars, including Aldis! That should be a no-brainer purchase for my Nintendo Switch.

The Dawsons (Zane and Dave) vs. Matthew Mims and Jordan Kingsley

David Marquez hosts the Dawsons at the desk. They put over their short resume on Powerrr and demand a shot at the tag titles. Eddie Kingston and Homicide interrupt, and wouldn't you know it, they disagree. Kingston is willing to put up their future title shot if it means getting another match against the Dawsons. Zane says they'll think about it, despite seemingly being put in a no-lose situation.

Joe Galli interviews Tim Storm about his future. Storm admits that he has been in a bit of a valley and lost out on a chance to redeem himself. He doesn't regret taking the challenge because Nick Aldis is an incredible champion and is proud of the match. Galli asks if Storm would be interested in pursuing other titles since the NWA title is off the table. Storm says the situation is heartbreaking, and while all the championships are important, he doesn't know if that's what he wants. Galli suggests that Storm go to management about getting around the stipulation, but they're interrupted by Nick Aldis, who wants a word with Storm in private. The camera zooms in on them, and it appears that Aldis is proposing some sort of partnership. Storm seems to take Aldis' words to heart.

Cornette makes a crack about pictures of Rosa being put in prisons to scare sex offenders, and I just don't know what to say anymore. Rosa quickly hits a knife edge chop and tilit a whirl backbreaker. Rosa works the back with a kick to the spine and leg scissors. Vox escapes, but Rosa pulls the hair for a slam. Vox flips into a standing crossface, but Rosa easily escapes and hits a dropkick. Rosa's flying double stomp to the spine ends it at 3:17. Wow, Vox got NOTHING. Great squash for Rosa.
Winner: Thunder Rosa

Rosa isn't satisfied and continues beating up Vox until Marti Belle runs in. Rosa backs off and it almost looked like Marti was considering beating Vox up as well. David Marquez interviews Marti about what just happened. Marti is more upset that Allysin Kay saying that she isn't ready, despite their long history together. Allysin Kay arrives right on cue and isn't happy that Belle didn't come to her first. Kay is ambushed by Rosa, who rams her into Marquez. Belle stands back and watches as Rosa beats up her old friend. Belle teases the save before kicking Kay in the face.

WHO IS THE MARK? video package. Some people would tell you that I am the mark.

2 out of 3 Falls: Ricky Starks vs. Aron Stevens

Stevens requested this stipulation to make up for his quick loss to Starks last week. Stevens attempts a cheap shot, but Starks has him scouted and rolls him up to win the first fall at 0:03. Stevens regains his composure in the stands while an old guy in a Tennessee Santa hat heckles him. Stevens returns to the ring and Starks nearly pins him again. Cornette makes jokes about Stevens' flesh colored tights while Starks controls the match with a dropkick. Stevens pokes the eye to finally gain an opening and viciously knees the ribcage. CUE THE CHINLOCK! Cornette says he's heard that Stevens is such a lousy actor that he couldn't play dead if you shot him. That's the sort of cheeseball color commentary I can get behind. Starks escapes and hits a tornado DDT for 2. Starks misses a missile dropkick, but Stevens argues with a heckler instead of hitting the Elbow of Disdain, and Starks rolls him up for the win at 4:49! Crowd is pleased to chant "You got beat" again. I love this silly feud, **½.
Winner: Aron Stevens

H2>NWA National Championship:
James Storm © (with Eli Drake) vs. Colt Cabana (with Mr. Anderson) Cabana scores first with a shoulder tackle. Colt hits a chop and crawls through Storm's legs and pulls somersaults him by the hands and slaps the back. Storm counters with a DDT off the buckles! Storm begins targeting the legs. Colt counters with a kick to the face and mounts a quick comeback. Colt's head scissors takedown is good and he scores a sunset flip for 2. Storm counters with a TKO onto the ropes and a baseball slide dropkick. Flying elbow by Storm but COLT KICKS OUT! Colt counters Storm off the top rope and bounces into a splash for 2. Cabana hits his series of jabs, but Storm answers with a backstabber for only 2! Storm hits the Eye of the Storm but Colt kicks out! Eli Drake hops on the apron, but Mr. Anderson backs him off. Drake punches Anderson, and Kamille shows up to shove Anderson into drake. Meanwhile, Colt surprises Storm with the Superman pin for the win at 7:58! Overwhelming entertaining and satisfying short match, ***.
Winner and new NWA National Champion: Colt Cabana

The Dawsons won't let the show end and demand that Homicide and Eddie Kingston meet them in the ring.

The Dawsons (Dave and Zane) vs. Eddie Kingston and Homicide

Kingston and Homicide are putting their title shot on the line. Wild brawl to start, with punching and biting. The Dawsons sandwich Kingston to set him up as the face in peril. Desperation head butt by Kingston, but he gets thumbed in the eye. Desperation clothesline by Kingston, but the Dawsons knock Homicide off the apron without a tag. Dawsons hit Kingston with a double suplex but Homicide breaks the pin. Eddie's STO allows the hot tag to Homicide (at the 3:30 mark) and he runs wild through the Dawsons. The Wild Cards show up in time for Homicide to dropkick a Dawson onto them. The Wild Cards trap Homicide on the top rope, but the Rock N Roll Express arrive for the save (to a big ovation). Sadly, Zane side slams Homicide for 2. The Dawsons have a miscue and collide in the ring, and Homicide's Gringo Cutter finishes Dave at 5:40! Great crash TV segment and match, **½.
Winners: Homicide and Eddie Kingston

Final Thoughts: Everything worked this week. This show makes me enjoy wrestling the way I did when I was a teenager. Go watch this now.