- The War is on. 1995 was the year of growth for WCW. Their audience had expanded, mostly due to the arrival of Hulk Hogan. With that new-found confidence and interest, PPV expanded to monthly shows, and the coup de grace', Eric Bischoff convinced Ted Turner to give him a prime time Monday Night show to run head-to-head with Monday Night Raw. September 4th is an unopposed night, so technically the head-to-head battle didn't begin until September 11th (a show I will skip since it's already up on Da' Site).

- From the Mall of America, Eric Bischoff, Bobby "The Brain" Heenan, and Steve "Mongo" McMichael are at ringside to call all the action, unless otherwise noted. I'll say it now and get it out of the way: Bischoff is obnoxious, McMichael is stupid, annoying, and unfunny, and Heenan makes nothing but dated jokes and seemingly stops caring every now and then.

And this is the first match in Nitro History. Kind of puts the first match in Raw History to shame (that would be a battle of HALL OF FAMERS... Koko B. Ware and Yokozuna). As a kid, I was an instant fan of Liger just for his appearance, but then I wised up and found out the dude was an amazing worker, so it's win/win. Liger, disappointingly, has generic theme "Oriental" music here (not a Network edit, it's WCW). They trade wristlocks to start. Whip to the corner, and Liger follows in with a rolling heel kick. Moonsault from the top gets two. Pillman with a head scissors, but a hurricanrana from the second rope is completely botched. Criss-cross, Liger with a drop toe hold and a Surfboard, but no one ever gives up to that move. Pillman comes back with another head scissors, but gets dumped to the floor. Liger follows with a running senton from the apron. Liger tries bringing him back in with a suplex, but Pillman counters, sending Liger back to the floor, and comes off the top with a plancha. Back inside, Liger with a Super-Plex for two (or 2.95, according to Bischoff). Pillman counters a body press with a dropkick for two. Powerbomb from Liger for two. Top rope hurricanrana gets two. PIllman counters a second attempt and connects with a Tornado DDT for two. Pillman counters a back suplex with a victory roll, and it's good for the three count at 6:55. They have a post-match moment of mutual respect. *** Not the instant classic these two had a few years back at SuperBrawl, but considering the time restraints and a bit of sloppy work early on, they did the best they could to pack in a lot of action and a hot sequence of near falls.

- Eric Bischoff interviews Hulk Hogan in a taped segment hyping... oh Lord... PASTA-MANIA. It's not an uncommon situation for a recognizable name to open up a business and use that name to market whatever the hell they were shilling, but really, wasting TV time to hype a food court location that sold over-priced Spaghetti-O's? I guess Bischoff really was that confident in what he could put on television. Here's some menu pictures as an added bonus. 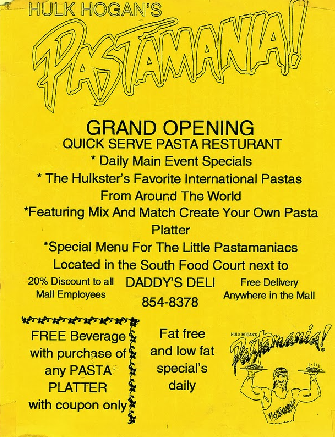 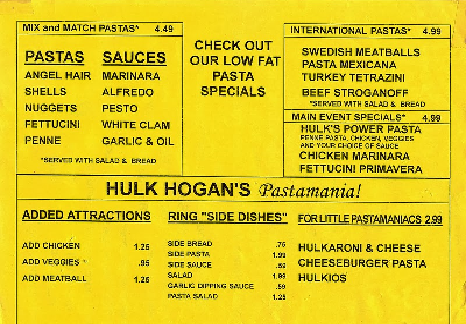 - Before the start of our next match, LEX LUGER shows up and Eric Bischoff tries his best to act like he's surprised and that Luger has no business being here, alluding to Luger's (former) employment with the competition. Considering the low-ball offer he accepted from Bischoff, Luger must've wanted out of the WWF really bad. After getting the strongest push imaginable, the rug was pulled out from under him and gradually would be phased further down the card. Think about this: in his last months with the WWF, he didn't appear in a wrestling role at SummerSlam, didn't appear at KOTR (and LOST a cheap Qualifyer to former rival, Yokozuna), and jerked the curtain in the most meaningless match at WrestleMania XI. Saying Luger was poorly used would be a HUGE understatement. Luger never really felt like he belonged in the WWF, so seeing him back in WCW was a breath of fresh air.

Can't do a big premiere without throwing Sting and Ric Flair in the ring and telling them to have a good match. Sting was riding along as a Hulk Hogan buddy, and Ric Flair was building towards a showdown with his former long-time friend and ally, Arn Anderson. After the opening shock of Luger's arrival, Flair struts and Sting "Whoo's!", so you know they mean business. Flair with a headlock and shoulder tackle. Criss-cross, and Sting takes him over with a press slam. Whip and a second press slam. He sends Flair across the ring with a hip toss, and out of the ring following a dropkick. Flair goes to the eyes and chops away. Sting starts no-selling and gives Flair a 3rd press slam. Whip to the ropes, and a body press from Flair takes both men over the top rope, to the floor. Flair avoids the Stinger Splash, but Sting follows up with a bulldog. Flair catches Sting coming with an elbow as we take a break. We come back with Flair being slammed off the top rope. Suddenly, Arn Anderson shows up as Sting misses a splash from the top rope. Flair with a delayed suplex, completely no-sold. Sting with clotheslines. Flair gets sent to the corner, flips to the apron, and laid out with another clothesline. Sting with 10 mounted punches and a hip toss. They go through a series of counters and do a bridge spot, which is always a neat sequence. Sting with a Super-Plex, and Bischoff with a bunch of hyperbole. Sting turns his attention to Anderson, allowing Flair to clip the knee and slap on the Figure-Four. Sting does his Tarzan No-Sell Spot and turns it over, but Flair hooks the ropes to turn it back. Anderson hops in the ring and the bell sounds at 8:44, probably a DQ for Flair. **1/2 Crappy finish, but even the abridged version of Sting vs. Flair is still a good match.

- Scott Norton shows up being pissed off, bringing out "Macho Man" Randy Savage. I'm sure casual fans had no clue who Norton was, so instantly sticking him into a confrontation with a top name like Savage is hardly the worst idea in the world. I would've loved to see him deck Mongo, though.

- Hype video for Sabu. I'm sure this made a bunch of ECW fans very happy, but WCW had no place for his style and I don't think he lasted through the rest of 1995.

- Saturday Night at 6:05 will feature Johnny B. Badd vs. Dirty Dick Slater, and Sting and Randy Savage team up against the Blue Bloods. Plus a SPECIAL Update for Fall Brawl. That second match sounds like something worth watching, but Dick Slater, in 1995? Please, how is that considered a double Main Event? Even Gorilla Monsoon wouldn't be able to say it with a straight face.

- Now arriving in WCW... MICHAEL WALLSTREET. With such snide remarks like "The New Generation is nothing more than the Few Generation" and "I'm sure the I.R.S. will be watching me real close", you can tell the only point of bringing Rotunda back was to make smart-ass remarks about the WWF. Kind of makes you lose respect to Rotunda, as WWF was retiring him into a Road Agent role and releasing others to open the doors for the transition, and then he signs with WCW and bashes them in not-so-subtle style. Several weeks later (heck, maybe even the next week), "Michael" turned into V.K. Wallstreet. ONE GUESS what the V.K. means.

This is our Main Event... kind of puts that Undertaker vs. Damien Demento match on the first Monday Night Raw to shame. Big Bubba was slowly being phased down the card after a somewhat high profile feud with Sting during the first half of 1995, so the result is obviously never in doubt, but still holds interest for casual fans looking for recognizable faces. BREAKING NEWS: Norton vs. Savage, next week. Lockup, Hogan shoves him off and poses... so 1995 Hogan is a lot like 2002 Hogan. Bubba grabs a headlock, but a shoulder tackle goes Hogan's way. Strong Hogan chant, but there's a solid amount of boo's mixed in. Bubba gains control... for about 10-seconds, before Hogan controls with a lot of count-a-long moves. Bubba with a cheap shot and back breaker. Hogan gets a boot up on a charge and casually pushes Bubba over, and then it's more count-along with Hulk. Referee Pee-Wee Anderson pulls Hogan away for whatever reason, allowing Bubba to take control, again. He goes after Jimmy Hart, and again, Hogan dominates. Hogan with a casual slam, elbow drops, and a rake of the eyes, because heroes fight dirty. Bubba gets another moment or two of offense, hits the Sidewalk Slam, and it's HULK UP TIME. Finger waggin', roundhouse throwin', big boot and leg droppin' for the three count at 7:08. 3/4* Hogan's comical, WWF house show style Main Events just aren't doing it for me. Big Bubba was never allowed more than a moment here and there, and felt more like an extended, poorly worked, Hogan squash.

- Post-Match, the Dungeon of Doom (Kevin Sullivan, Meng, Kamala, The Shark, Zodiac Man) run in, but LEX LUGER runs in as well to help make the save! They go face-to-face, drawing out Sting and Randy Savage. Gene Okerlund comes out to get a word with everyone, and Luger quickly throws down a challenge at Hulk Hogan. The Real American vs. Made In The USA! NEXT WEEK! ON MONDAY NITRO! How do you give that away on free television?! It's WCW.

Final Thoughts: Quite an explosive debut for Monday Nitro. Lex Luger's shocking debut, three high-profile matches featured, two of them being of decent quality, and building up to a pretty big Main Event the next week in the first head-to-head night of the Monday Night Wars. Honestly, the only problems I had with Nitro were 1.) Hulk Hogan's pathetic attempts at trying to get over his "comedy house show matinee" performance after Liger/Pillman and Sting/Flair blew it away by comparison, and 2.) The excessive cheap shots at knocking the WWF, especially the vignette featuring Mike Rotunda. For historical purposes, It's an automatic show to give a look, but take that away, and it's a quick and enjoyable 45-minutes.

Back to Nitro index