Halloween Havok shines its light (or brings its stench) to a fairly infamous 1986 chunk of cheese. It seems silly, now, but y'know what was scary and unruly back in the day? Heavy metal music! Judas Priest was in the midst of a trial for alledgedly telling kids to shoot themselves! Dee Snider filed his teeth! Ozzy Osbourne ate a bat and whizzed on the Alamo! Iron Maiden had an album titled "Number of the Beast"! Gene Simmons breathed fire! Klaus Meine had a receeding hairline! Umm... Lita Ford was a slut! Where are these wretched heathens coming from and how can they be stopped?!

North American media was clearly intimidated by this wild metal stuff. Add in the fact that metal has long standing ties to horror movies and you've got the perfect excuse to make a "scary" movie. Heck, one of the first and most influential acts; Black Sabbath; borrowed their name from a horror flick. Eeek! It's metal! Run in terror!

Featuring cameo appearances from Ozzy Osbourne, Gene Simmons and a soundtrack by Fastway, "Trick of Treat" was sorta' labelled as the "heavy metal movie" of the time. Half horror, half comedy and 100% metallic (alledgedly). And who better to play the main protaginist in this tilt?! Why, Marc Price, the guy who played the nerdy "Skippy" in the sitcom "Family Ties", of course! 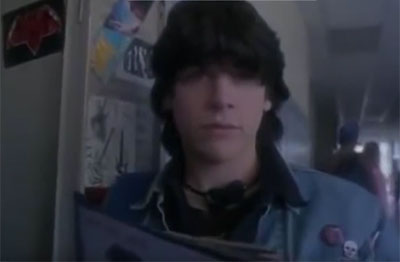 Well, we're not off to a very "metal" start. As the opening credits roll, Price's character, Eddie Weinbauer aka "Ragman", is writing a fan letter to his hero, Sammi Curr. Part Dee Snider, part Blackie Lawless, Sammi went to the same high school as Ragman and it set to play a concert there on Halloween night. Eddie is borderline obsessive with his Sammi Luv and completely belives in his musings, such as "rock's chosen warriors will rule the apocalypse"! As the camera pans his room, we see that Eddie also has posters of infamous "backwords messagers" Judas Priest and other lesser-known bands (at the time), like Anthrax... in all their open-shirt/teased hair "Armed & Dangerous" era glory. But everything in Eddie's world some to a halt when he hears that Sammi Curr has DIED in a mysterious hotel fire. The controversial purveyor of suggestive lyrics and "rock pornogaphy" is gone.

After the news, Eddie sulks through his day and is bullied at school. Typically, media would portray "metalheads" as wild n' crazy partiers or complete burnouts. So it's refreshing to see a somewhat accurate portrayal of Eddie as a complete nerd. The typical "jocks" (who appear about 25 years old) tease him and almost drown him. Only his nerdy friend Roger can console him. Along with Leslie, the requisite kind-hearted "babe" who appears to be the only other person with humanity at Eddie's Lakeridge High School. I'm not familiar with the actress who played "Leslie", but she IS kinda' cute for 1986 standards. If I was in high school, I'd totally hit on her...or, more accurately, have masturbatory fantasies about her. 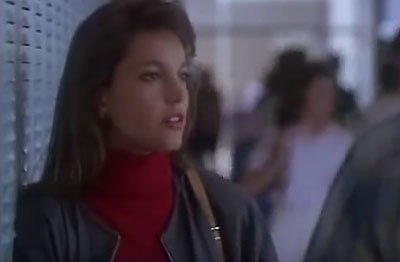 Eddie is also friends with the local radio disc jockey, "Nuke". Played by Gene Simmons, he was supposedly angling for "Wolfman Jack"... but comes off like a cross between Dr. Johnny Fever and Hank Williams, Jr. Gene was detached from KISS and really wanted to be a movie star around this time. He was doing a half-assed job of being in KISS, combined with a half-assed job of being in Hollywood. But who's complaining? It's not like Gene set the bar high with his "movie roles". Such as "Never Too young to Die". If you haven't seen it... don't. 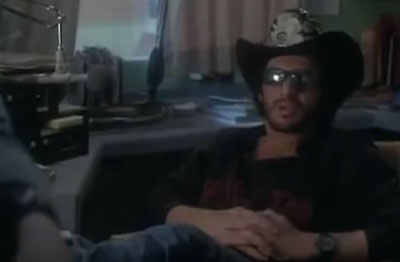 Nuke has a special gift for Eddie-- the last record ever cut by Sammi Curr. Nuke plans to play it at midnight on Halloween, but he'll let Eddie have a copy. Yes, it's on vinyl, for all you retro-hipsters. Eddie takes it home and that's when Weird Crap happens. He plays it backwards, then at 78 RPM, and begins receiving message and strange dreams. At first, they're kinda' harmless, like "No Wimps! Death to False Metal", but he then begins to hear much more vindictive messages. Eddie discovers that he's communicating with Sammi Curr via these creepy fortune cookie type of directives. 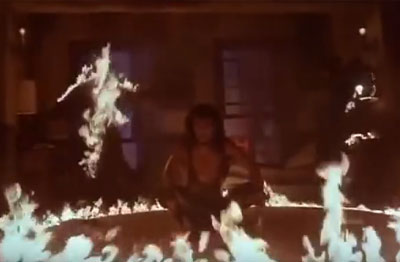 Curr's missive about "metal machines, 66 crush" leads to another confrontation with the Jocks and the near murder of one in the school's metal shop with a spiked press. How "metal" is that? Hey-oh! It's no exaggeration, but the attmepted murder is actually set up by a skinny tie. 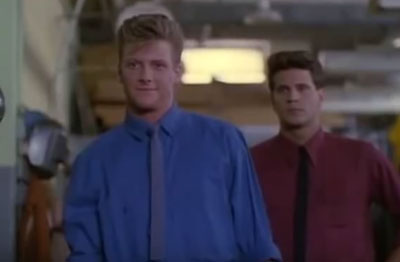 The rest of the story revolves around the supernatural return of Sammi Curr. He seemed like a goofball, but we soon find out he's basically a homicidal undead prick. He's the worst fears of the Tipper Gore and the PMRC come to life! His physical appearance and costume is a little more "Rocky Horror" than horror, though. He can move through electronics, so he's a little like Spider-Man's Electro, or the 1989 movie "Shocker"...which featured a song by Paul Stanley, Gene Simmons' best buddy in KISS (ooh, a rambling connection that would make Matt Pinfield proud). Sammi can also control cars...cars with tape decks. Eh, just go with it. Sammi reincorporates at the climactic high school Halloween dance, zaps people and gets the crowd to chant "rock" (a move that would've made Trailer Park Boys' Ricky happy). 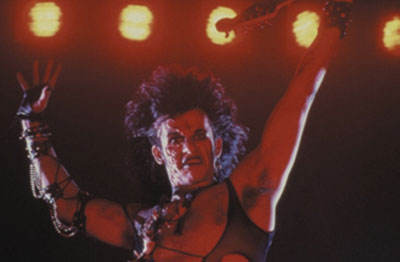 In the midst of Sammi's return is a scene where a random demon seeps in through a young girl's headset...and proceeds to give her an etheral "ghost orgasm". It's pretty humorous...and the demon is never seen or mentioned, again.

Another random scene involves a TV broadcast featuring the former corner man for the British Bulldogs-- Ozzy Osbourne as "Reverend Aaron Gilstrom". He appears in studio to analyze the track "Do it Like a Dog". To quote Ozzy: "this could kick you off into becoming an absolute pervert". 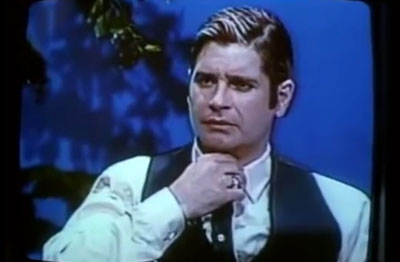 When it wraps up after a climactic scene at the obligatory high school Halloween Dance, "Trick or Treat" feels like the plot of 1984 metal video. Think Ratt's "Round and Round" or Quiet Riot's "C'mon Feel the Noize" for most mainstream example. Metal takes you over and makes you do EVIL THINGS. It takes awhile to figure out if Eddie has any heroic qualities. At first, he seems like an obsessive fan with mental issues a, la "Misery". The tone of the first 1/2 of the movie is very similar to "Christine"-- isolated dweeb gets wrapped up in his own fantasy world and believes something's talking to him. Eddie even has an old clunker to drive around in, to strengthen the "Christine" connection. A clunker with custom monogrammed plates that read "RAGMAN". True, a monogrammed license plate isn't very "metal"... but it's totally believable for a suburban dweeb like Eddie to have one.

The soundtrack features a healthy dose of the band Fastway. There are a few other songs spliced in, by acts like Only Child (who?), See Jane Run (who?), Diana Blair (who?) and... holy crap, Whodini, with their song "Haunted House of Rock"! If there's one nugget you take from this flick, add "Haunted House of Rock" to your Halloween playlist 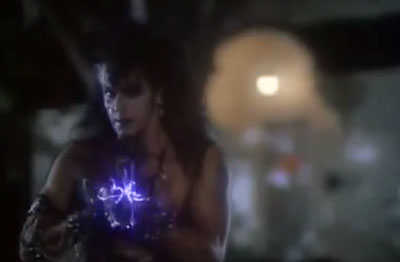 Why'd You Watch This?
"Trick or Treat" dabbles in comedy, then jumps into typical mid-80's horror stuff. There are plenty of plot holes, but why bother nitpicking? The tone is similar to a flick like "Critters". Sure, it's preposterous, but there's enough traditional horror stuff to move things along. At a mildly intersting pace, at least. My favorite gag involves the jocks chasing Eddie though the school. When they enter the library, they all stop and slowly walk through the room. One jock then hops over a bucket which sends him flying out a door in cartoony fashion. Plus the Halloween costume of Eddie's mom's boyfriend is worth a snicker. It's moments like this that assure you that "Trick or Treat" is not taking itself seriously. It's a perfect 80's late night guilty pleasure that Gilbert Gottfied and Rhonda Shear would've appreciated. 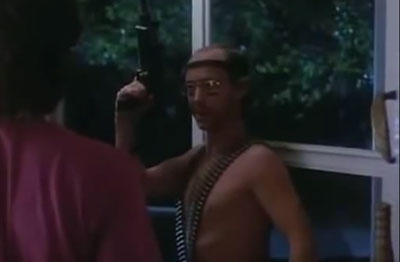