The Simpsons' Treehouse of Horrors

- Considering all the years we've done Halloween Havok here at Da' Wrestling Site, it might come as a surprise why I've deliberately ignored covering at least one episode of their annual Halloween episode. Yes, I do like to dig deeper for something a little more unpredictable, but I guess that went out the window when I went into detail (again) with how much I disliked Jaws: The Revenge... somehow, that's a cheap plug for last year's article, and at the same time, I hate myself for doing it. It's truly an awful movie with very little positives in the 87-minute run-time.

Anyway, back on topic: I'm not going to lie, I've mostly despised the Simpsons still being on the air. I don't remember watching more than a handful of non-Halloween episodes, but most of them feel like recycled plots from earlier seasons. Considering we're approaching Season 28, that's understandable, and Jesus Christ, that just makes me feel old, considering I was 4 when the series premiered as its own program (not counting the run of shorts on the Tracey Ullman Show). Regardless my personal stance on the quality of the programming, the one thing that has stayed on the positive side of the spectrum is the Treehouse of Horrors episodes. Even if I can't stomach a full episode from Season 24, damn if I didn't enjoy their Halloween treat for us. Instead of hitting a random number generator, or cherry picking an episode, I figured "why not start at the very beginning"? 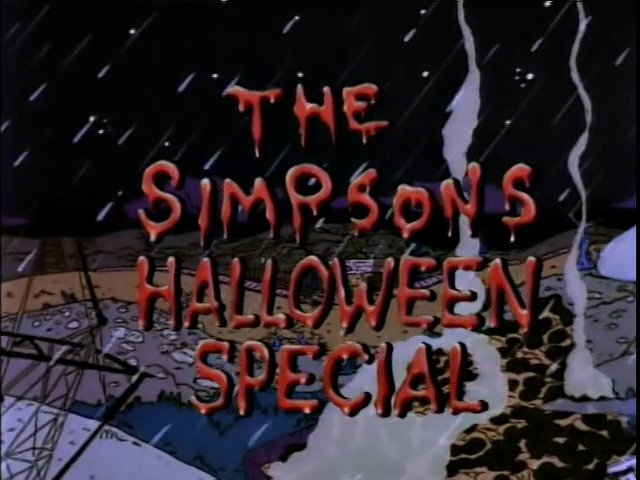 The first Treehouse of Horror begins with our first of many, many homages, the introduction from the 1931 Universal version of "Frankenstein", where Marge comes out in front of a curtain to address the audience about the disturbing images, and that parents should put their children to bed now before they write angry letters in the morning. I won't be able to address EVERY reference made, because that would be both too time consuming and ruin the fun for anyone else watching these. If you noticed something I didn't, play along and leave a comment, or share on social media. BOO! Cheap plug. Scarier than any House of Horrors or Fright Night.

In a staple of the earlier specials, we cut through the local cemetery before we get to the Simpsons house to kick off the trilogy of shorts. Some of the headstones have random Simpsons names, along with Garfield, The Grateful Dead, Casper the Friendly Ghost, Elvis, and Paul McCartney. Unlike any of the others (as far as I know), the treehouse is the hub of the entire episode, where Bart and Lisa (with Maggie at their side) are trying to out-scare each other while Homer, returning from Trick or Treating ("I love Halloween!"), eavesdrops on them from outside. Bart poo-poos Lisa and has something that's "really scarifying"... 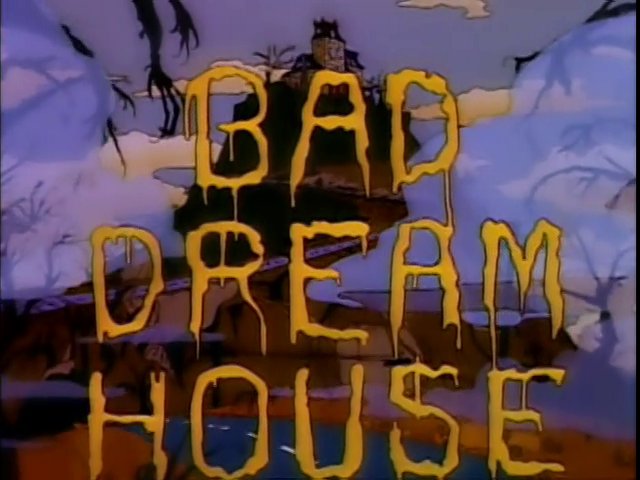 You know, you rebroadcast this segment now, and you can just reskin it as a spoof of American Horror Story's "Murder House" season. With that modern reference out of the way, this is mostly a spoof of Poltergeist. The Simpsons have moved into a luxurious mansion (that closely resembles the Addams Family residence), and cheap-skate Homer tips one of the delivery men a dollar for his services, prompting a smart-ass remark (from James Earl Jones, no less) "I'm glad there's a curse on this place." It doesn't take long for suspicious activity to take place, including books repacking themselves and being thrown at Lisa, with Bart blamed for it, of course. An eerie voice warns them to leave, but Homer chalks it up to "the house settling."

Inside the kitchen, they discover a "vortex", prompting Homer to toss an orange in. A crumpled note comes back at them, asking not to throw garbage into their dimension. Meanwhile, Bart is being strangled by the cord of a lamp, and Homer is still oblivious. He continues to rationalize things until being elevated onto the ceiling and dropped back down to the hardwood floor. He asks for everyone to sleep on it, leading to a sleepwalk induced near-knife fight. Thankfully, Marge was only spreading mayonnaise on a sandwich (with an incredibly large knife) and was able to prevent any harm. "We've had our differences and squabbled, but we've never had knife fights before." To break up the tension and attempts at being completely serious, they discover an ancient Indian burial ground in the basement, with such headstones as "Mahatma Gandhi", "Sacajawea", "Crazy Horse", and my favorite, "Not So Crazy Horse."

Homer furiously calls the real estate agent that sold them the house, only to be convinced he was already notified of the conditions of the house. The house threatens them further until Marge finally has enough and screams at it to leave them alone and learn some manners. Bart demands more parlor tricks, but the house refuses to entertain his request. They pressure it into trying to deal with them living there, and give it a chance to think it over. Moments later, the house chooses to implode itself rather than accept The Simpsons. "You can't help but feel a little rejected."

Lisa didn't find the story scary, nor did she fall for the old "severed finger in a box" gag. Bart comically mispronounces "macabre" as we lead into the next story... 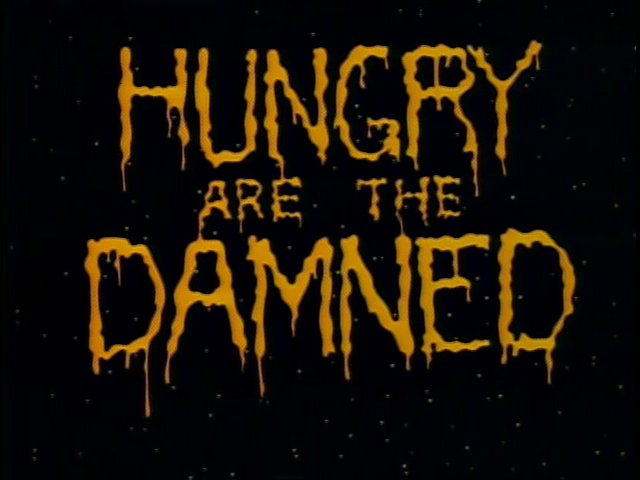 We can immediately address that a lot of the earlier TOH episodes were inspired by EC Comics and The Twilight Zone. This one borrows heavily from the Twilight Zone episode "To Serve Man", but with a bit of a twist ending. The Simpsons are in the backyard getting ready to barbeque (and yes, Homer does use way too much lighter fluid to get the grill going) when they're abducted by green aliens with one large eye and tentacles named "Kang" and Kodos" (and Shiroc the Preparer, who insists pronouncing his name was only possible with the removal of one's tongue, and would never be seen again. Once more, a quick use of James Earl Jones' voice).

Kang and Kodos butter up the family, offering them a relaxing time with cable TV (but not HBO, that would cost extra) and advanced technology like Ping-Pong. You know, the old paddle video game that was created in the 1970's. They also feed The Simpsons round the clock, encouraging them to "grow large with food" and weigh them in, almost overjoyed to discover Homer's weight. Lisa, being the only suspicious family member, begins investigating the motives of these creatures, who promise to make them the guests of honor when they arrive on their home planet. Shiroc is in the middle of preparing another meal, suggesting "this will give the human's the perfect flavor." Lisa waits for him to leave before finding his cook book and takes it as evidence. The name of the book? "How to Cook Humans". In her attempt to reveal their plan, Kang (or Kodos) blows some space dust off the book to reveal it actually reads "How to Cook for Humans." Lisa blows off some more, and now it's "How to Cook Forty Humans." Finally, one last blow of space dust and the full title is "How to Cook for Forty Humans." Disgusted with the inability to trust, they banish the Simpsons back to their home, where everyone chastises Lisa for being untrustworthy of the alien species. In all future episodes (as far as I recall), Kang and Kodos are presented as villains rather than trustworthy aliens.

Back in the Treehouse, Lisa ignores Bart strangling himself in favor of a good book, featuring a "classic tale of terror" by Edgar Allan Poe... 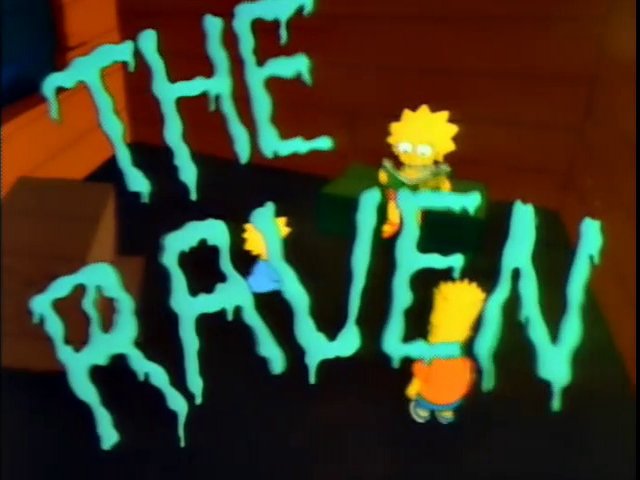 We wrap up the 1st Treehouse of Horror with a very straight-forward retelling of the popular poem, narrated by Darth Vader, Mufasa, and Terrence Mann himself, James Earl Jones. Homer represents the unnamed character telling the story of his lost love Lenore (Marge, only seen briefly in a painting that needs an additional painting to capture all of her hair) and the never-ending torment brought to him by a Raven that sits upon his chamber door (and of course, the Raven is played by Bart) and offers nothing but the word "nevermore." Considering the comical nature of the series itself, and the fun they had paying homage to other supernatural fiction, it seems almost out of place for them to follow the poem word for word in the 6-minute segment, doing something comically visually, but sticking true to the content of the poem, including Homer's anger fueled rant at the Raven, and mourning the death of his love, Lenore. As a child, I'm not going to lie, I hated this segment, but over time, I grew to enjoy it and would even put it in my top 10 of all Treehouse of Horror segments.

With everything said and done, neither Lisa nor Bart (or Maggie, I suppose) were shaken by any of the stories of antics that filled their evening. No, instead it was Homer who was left shivering with terror, refusing to go to sleep with the lights off, but Marge forces him to accept everything as "children's stories that can't hurt you". A raven, not unlike the one that Homer pictured in the telling of the poem, can be seen outside the window, sending Homer under the sheets and proclaiming how much he hates Halloween.

Final Thoughts: Being the first in a long line of specials, the first Treehouse of Horror mostly keeps things simple. The plots for each segment are simple and to the point. All viewers could easily identify the first segment's origins, while older viewers would be the ones likely to get the Twilight Zone references. As for "The Raven", I can personally say that was my introduction to who Edgar Allan Poe was and the first time I'd ever heard of the poem. The tradition begins with a non-cannon episode about having fun, and every segment, including the introduction and wrap-around segments, delivered an entertaining half-hour of content.