Scooby-Doo! WrestleMania Mystery. When I heard of this movie coming out, well over a year ago, I shook my head in disbelief that we would be getting a WWE and Scooby-Doo cross-over. Not because it would be awful, but because it took THIS long. Scooby-Doo has a history of cross-overs, from Batman, to the Harlem Globetrotters, to Mama Freakin' Cass, and it took until 2013 for them to include the WWE (or any wrestling promotion license, period). Could you ever imagine Scooby-Doo solving a mystery alongside Hulk Hogan? Unfortunately, that never happened, but here we have John Cena and the second-biggest Superstar in the WWE... SIN CARA, to lend a hand. I guess CM Punk wouldn't allow himself animated without his Pepsi logo. Cheap bastards at WWE... I originally had zero intention of doing a write-up of this DVD, but sitting through the movie, I just couldn't help but have a lot of fun with the harmless nonsense and fun that was being presented. What I'm about to offer is a blend of my running commentary and trying to put together the basic plot, without being overly detailed and boring about it: 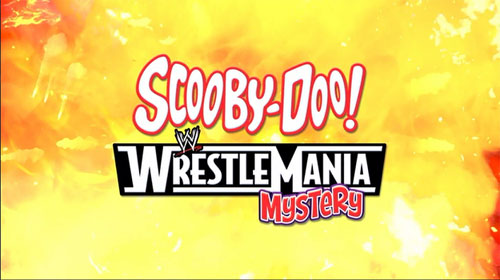 We open up with The Miz, taking a jog around "WWE City", listening to his own theme music and constantly saying "Who's Awesome!? I'm Awesome! Who's Awesome?! I'm Awesome!" For those of you who, like me, enjoy watching Miz in misery, well then this is the movie for you: On top of being mauled by GHOST BEAR (absolutely no relation to Bill Cosby's Ghost Dad), he spends the majority of the movie crumpled over or laid up in bed with enough injuries that Shawn Michaels, circa 1997, would tell him to knock off his crybaby bullshit. It still doesn't beat the time Antonio Cesaro kept swinging him, head first, into the security wall... or the time Brock Lesnar chucked a chair at his head, just because he felt like it. If someone were to release a DVD of just "Miz in Pain", I would buy a dozen copies and give them away for free, in an attempt to spread awareness of how awesome it is to see Miz suffer. 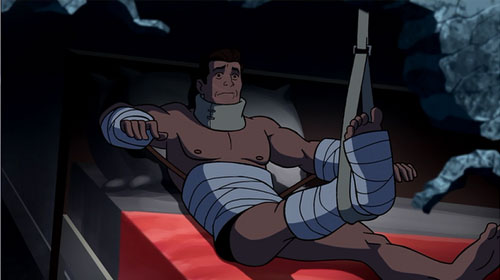 Scooby-Doo and Shaggy, through some weird tie-in with a Video Game, win tickets to attend some camp at WWE City (home of such fine eateries as Tombstone Taco's and Royal Rumble Ribs). Like any true Wrestling Geeks™, they have to convince non-fans Fred, Daphne, and Velma into going, stooping so low as to using a guilt trip for all the crap that they (Scooby and Shaggy) are put through for every mystery they have to solve. On the way, they come across WWE Superstar John Cena, who helps pull their truck out of a ditch, thus earning Daphne's attention for the remainder of the movie. Ugh, typical women... only watch to check out the over-muscled doofus that the male adult audience hate for unknown reasons. Cena gives them tickets to the next live event (what is this, WCW? I'd say TNA, but people still wouldn't go), and get treated to such 5-star classics like Brodus Clay vs. Zack Ryder, A.J. Lee vs. Local Scrub, Triple H growling and Cena and Sin Cara taking on Big Show and Alberto Del Rio. Cena went over, of course, to the thrill of his only fan in the crowd... 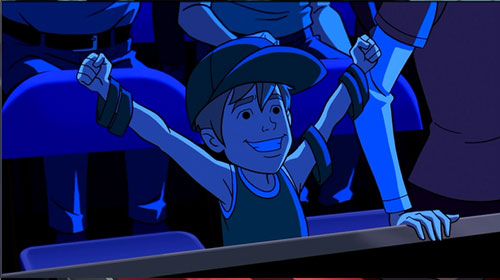 ... BUT THERE'S ONE PROBLEM! THE WWE TITLE IS HELD IN ABEYANCE! OK, they didn't use that term, but the title is held up, and a new Champion will be crowned at WrestleMania (Spoiler: Batista?). But then there's a problem... someone is trying to sabotage WWE CITY! OH NO! So someone wants to ruin WrestleMania and the WWE... am I the only one BEGGING for the masked villain to reveal himself as Vince McMahon? "It was me, Scooby! IT WAS ME ALL ALONG! Holy crap, that would be the greatest swerve in the history of the World. I'm actually disappointed this wasn't the finish, but I guess Scooby-Doo WrestleMania Mystery isn't catering to masochistic wrestling geeks who enjoy making fun of Vince Russo's work circa 1999-2000.

Our characters of suspicion include, in no order of likely possibilities: Cookie, a Trainer in WWE City (voiced, I think, by Charles Dutton), his nephew, Ruby, aspiring wrestler and computer nerd (Ruby... like RUDY? I make the reference because of Dutton's role in the movie Rudy. Coincidence? Probably), a shaggy beard hermit, possibly Bray Wyatt's father (Mike Rotunda?!), Ms. Richards, personal assistant to Mr. McMahon and person in charge of security and all that fun stuff, and of course, Mr. McMahon... but I already told you he didn't do it, despite my constant wishes the ending would change. 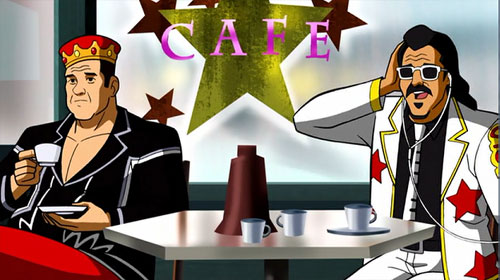 "For no reason, here's a shot of Jerry Lawler and Jimmy Hart chillin'."

Despite having ZERO lines, it appears Sin Cara has the largest role in the movie. Since it's his job to exposition a lot of the plot and background surrounding Ghost Bear, John Cena is standing by as his trusty translator... apparently he's a master in speaking "Masked Luchador." I'm sorry, but I got a good laugh out of that one, and the dead-serious, playing-it-straight tone in Cena's voice as he delivered the line. So, yeah, Ghost Bear (named Vicious, who's partner, Delicious, was mysteriously absent) had a feud with Sin Cara's Great-Great-Great-Grandaddy, Sin Cara Grande. A Main Event in any arena in the country, according to Gorilla Monsoon. Sin Cara Grande (or Sin Cara Classic) won the battle, but lost the war, forced into retirement from a sprained ankle. Wow, who diagnosed him, the same doctor that told Shawn Michaels he had to retire in 1997? Alright, alright, no more Shawn Michaels jokes... he doesn't deserve it... anymore.

Mr. McMahon is concerned over the safety of WWE City and the precious WWE Championship Belt, locking it in a vault that would cost 50 times more than replacing the actual belt he's trying to protect. Sounds more like boneheaded TNA spending than WWE. "You got to spend money to save money" should be their new slogan. Despite the reassurance of Ms. Richards that EVERYTHING IS FINE (can I call her Dixie?) the belt is stolen, and it appears the thief is none other than... SCOOBY-DOO! Heel turn! Okay, not really, it's a frame up, but Mr. McMahon doesn't believe him, and neither does Ms. Richards, so the cops take him away. Heartbroken John Cena is priceless. Please tell me Triple H shows up to reveal that the police are fake and tries to drown Scooby-Doo in a puddle of water... what, WWE is as PG as this movie, and they still did that on Monday Night Raw. So, on top of possible jail-time, Scooby-Doo and Shaggy will be forced into a match at WrestleMania... with... KAAAAAAAAAAANE~! 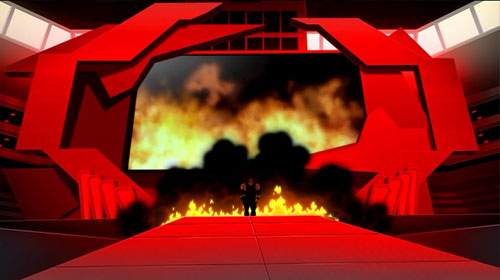 "WWE and Scooby-Doo: Ripping off the uninspired booking of Kane, circa Forever"

Yes, even in the animated world of Scooby-Doo, pissing off the boss includes a punishment match with the Big Red Machine. Have I mentioned how much I love this movie, yet? I have? Oh, okay. I'm sure people willing to spend $60 on this PPV (or the 6-month commitment to the WWE Network) are thrilled about the possibility of watching Kane squash Colin Delaney and Ashley at WrestleMania. To get into ring shape, A.J. volunteers to show them the ropes, and does her best impression of Tough Enough Trainer Hardcore Holly as possible, roughing the two up to the point of being in tears. Pussies. Did I mention the whole scene is set, in montage form, to A.J.'s theme music?

WrestleMania is here, and true to his word, Mr. McMahon forces Shaggy (named Skinny Man) and Scooby-Doo (Dead Meat) into the match with Kane... not just any match... it's a LAST MAN STANDING MATCH! Got to love changing the stipulations at the last minute, as if it's going to effect the buyrate. We see the same 7 people watching at home, probably TNA fans who ordered the wrong show. Wait... SKINNY MAN AND DEAD MEAT? Oh well, still better names than Michael McGillicutty and Husky Harris. Kane squashes them like bugs, including a Double Chokeslam over-sold to the point it makes Dolph Ziggler look like a straight-seller. For some inexplicable reason, the match changes into a STEEL CAGE MATCH, with the Bear and several WWE Superstars joining in the action. I don't know... maybe this IS a TNA show: Mid-match gimmick changes, nonsensical participants, and complete lack of structure and rules. Dig the "Is That a Bear?!" sign behind Michael Cole. Someone needs to bust that out at the next WWE Live Event they go to.

With odds overwhelmingly in their favor, the good guys win, which has Velma marking out, finally letting the demon of being a wrestling fan consume her soul. The Bear is unmasked, and it turns out the villain.. WAS MR. MCMAHON! Just kidding, it's Cookie. Apparently Fortune... I mean Cookie, was jealous at the success of the WWE and its Superstars, because he was held down for his color... I mean because he was seriously injured and wasn't allowed back in the ring. What, did he dislocate a finger or something? And he would've gotten away with it if it weren't for Skinny Man and Dead Meat! Mr. McMahon is so grateful for the heroic efforts in finding his beloved WWE Championship Belt, he declares Skinny Man and Dead Meat the Winners AND NEW!!!!!! WWE Champion of the World! I guess this is supposed to replace Chris Ben----- as the feel good ending to a WrestleMania for geeks everywhere. Daniel Who? 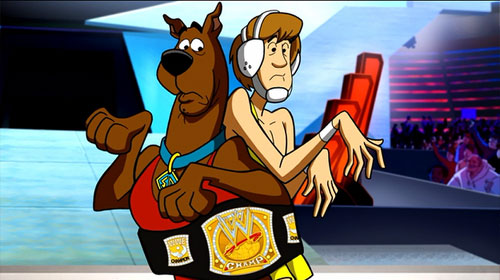 Final Thoughts: I can't hide it, I loved this movie. I've always been a fan of Scooby-Doo and it's campy storylines, and throwing in the WWE Superstars? That's a recipe for Awesome (no relation to the Miz). Sure, a lot of my enjoyment and pleasure is from mocking the WWE storylines (and TNA) and just looking too into things as a smarky-douche wrestling geek, but I can see this being entertaining for the target demographic: children. It doesn't take itself seriously, true to the Scooby-Doo universe, and the WWE license is used to perfection, right down to the goofy crap like "Royal Rumble Ribs". If you can't find some kind of enjoyment out of this, being a fan of the Scooby-Doo license, goofing on WWE, or just 85 minutes of nonsensical fun, then something is wrong. user posted image "WWE City: Opening in 2018 [Really in 2021]"