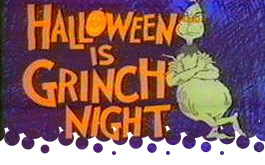 Where do I begin with this one? Even if you're not a Dr. Seuss enthusiast like I am, everyone who's anyone knows who the Grinch is. He's the green-haired radioactive-Who that tried to steal Christmas because he hated how much everyone was obsessed with material posessions. Little did he know that Christmas doesn't come from a store, but maybe, perhaps, I forgot the rest of the line... but the point was Christmas comes from the heart, and it's not about material posessions. Originally published in the mid-50's, and later an animated special in the late 60's, the Grinch has become one of the most famous and popular characters ever to have anything to do with Christmas...

...So in 1977, they spun him off into a Halloween special. ZUH!? Yes, originally airing on ABC on October 29th, 1977, the Grinch made his return to network television with a brand new special. With his Christmas theft efforts thrwarted, I guess the Grinch decided to make it a tradition to become a pain in the ass for the Who's on a holiday themed basis. I wonder what comes after Halloween... Thanksgiving Thwartin'? Before the biggest question comes, no, this is not based on any books/illustrations from Dr. Seuss. It's an original story made specifically for this television special.

The story opens in the town of Who-Ville, where we see everyone having a good time doing various chores. Suddenly, a sour-sweet wind picks up, which triggers all the Who's into panicing and locking themselves in, including Euchariah, a bookish little Who, and his family, Josiah, his grandfather, Mariah, his grandmother, and a few unnamed, younger siblings. Did I forget this is a musical? Yes, Josiah sings "I Wouldn't Go Out on a Night Like This" while boarding up the doors. I've always wanted to substitute that starting line, because it ends with "for a dollar and 50 cents", and then gradually increases in total over the course of the show. We see from here that it's the loud noises of the Greegumps and Hakken-Kraks that gets up the Grinch's skirt... Jesus, this guy has an attitude problem.

The Grinch, now voiced by Hans Conried (Boris Karloff, the original voice, passed away in 1969... and did a voice in Mad Monster Party, don'cha know?). The Grinch says he wouldn't stay home on a night like this for $66.60, and orders Max to bring him the PARAPHERNALIA WAGON. The Grinch, along with Max pulling the wagon, make the slow (and I mean DIRT SLOW) treck down Mount Crumpet. Back in the house of Josiah, Ukeriah doesn't know why everyone is so panicked, and has his grandfather call area code 5-19006 to know if the whereabouts of the Grinch are known. While we're on hold, it's back to a pretty cheesy musical number (including dancing) from the Grinch (called "The Grinch Night Ball)." Max (inner voice, of course) sings "How Many Times" because he's constantly having to help the Grinch, when he's reluctant to do so. I'm sure all fans of the Grinch know that Max is a good guy, but nice of them to show flashes of it here just in case for newcomers... 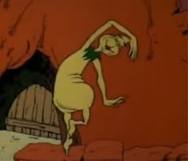 Sergeant Samuel McPherson delivers bad news about the Grinch's arrival, then we see the Grinch is OCD enough to stop his travel to make sure he runs over every single flower is trampeled. Then he chases down the Wuzzy Woozoo (a pink, fluffy... thing). If you're going to be evil, might as well wipe out an endangered species. The Woozoo outsmarts him, though, and the Grinch crashes into a Brickle Bush. Back in the house of Josiah, Euchariah says he has to go to the Euphemism (outhouse), but the strong sour-sweet wind blows him away to Mount Crumpet.

While picking Brickles out of his butt, the Grinch comes across Euchariah. He doesn't scare him when his glasses aren't on, so his eyebrows fly off and starts singing "Ooga Booga", which might be english if it were put into a blender, first. Euchariah gets it in his mind that the only way to prevent the Grinch arriving at Whoville is to stall him, and sleads down Mt. Crumpet to block his path, and demands the Grinch to scare him some more. "I gave you the 2 dollar treatment, you're not worth the full Grinching." Persistance is key, though, and eventually Euchariah's agitation gets up the Grinch's goat, which doesn't seem like it's too hard to do. 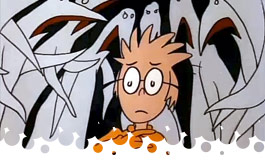 The Grinch brings Euchariah up on his Paraphernalia Wagon, and releases the horrors that rest inside... and I swear to fucking GOD, this has to be on Tim Burton's list of "people and things I owe for my inspiration", because it's a lot of really awkward, "scary" objects that are just impossible to describe other than as "shapes that scare kids." The members of the Grinch's "Un-Human Race" sing at Euchariah, and chase him around, possibly in his own mind. It doesn't establish if all this is fantasy or real. Euchariah keeps the Grinch and his minions distracted long enough for the sour-sweet wind to pass, thus forcing the Grinch back to his cave atop Mt. Crumpet, and saving Whoville from yet another Grinch-tastrophy. While Euchariah and his family bask in the glory of keeping the Grinch away, the Grinch reminds us all in closing that the sour-sweet wind will return one day, and it will be Grinch Night all over again.

Final Thoughts: Other than my dislike of the new voice of the Grinch, and honestly, no one can touch Boris Karloff's awesomeness as the voice, there's not a whole lot that can be said that would be considered complaining about this special. The animation, especially for the mid 70's, is detailed, bright and colorful, and doesn't suffer from Hanna-Barbera syndrome of recycling animation over and over again to save a few dollars. The musical numbers (there's a bunch of them) are short and for the most part pretty good, but are also incredibly forgetable. Nothing near the levels of "You're a Mean One, Mr. Grinch." With just 25-minutes, we set up the new main character, established why the Grinch is coming out when the Sweet-Sour Wind Blows, and reminds every doofus that Max is a good dog, not a villain. From top to bottom, every way you look at it, a spectacular effort from everyone involved.