Hey Hey Hey, it's a Halloween Havok TV Special. From 1977, a special episode of Fat Albert (and the Cosby Kids), originally aired on CBS as a prime time special. CBS would keep running this episode well into the 80's, as it would sometimes pair up with their other prime time Halloween cartoon-- "It's the Great Pumpkin, Charlie Brown"-- for a tidy hour of programming.

As a wee lad in the 70's, I thought Bill Cosby was the coolest dude in the world. He had his comedy albums with their sketches about childhood hi-jinks; like go-cart races and snowball fights. It's pretty well-known that those albums were the "first appearance" of Fat Albert, along with other familiar characters like Ol' Weird Harold and Russell (My Brother Whom I Slept With). Which all spun into the animated exploits of "Fat Albert and the Cosby Kids"... WITH live-action intro segments done by Bill Cosby, no less (probably one of the best and most enegetic openings of any cartoon). The show resonated with kids and parents, alike, and went on to a lengthy run on network TV. To me, Fat Albert and the gang were up there with Bugs Bunny, Mickey Mouse, Spider-Man and any other well-known animated property. Most of their adventures seemed like the crazy junk that I'd get into as a kid. Even today, I think back on the stuff my brother and I did as kids, and I have to stop to think: "wait... did that really happen, or was it a Bill Cosby or Fat Albert thing"?

This special kicks-off with a variation on the classic intro. The music is there, with Fat Albert (Cosby) telling us: "Hey, hey, hey! It's the Fat Albert Halloween Special". WITH its own special pumpkin. Stumped on what to carve into your pumpkin this year? Here's a suggestion. You're guaranteed to score Cool Points. 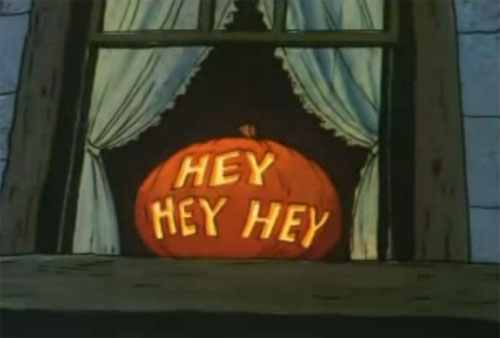 Like most Fat Albert episodes, there's a moral lesson being taught... one that's usually determined in the first few minutes; which also makes it obvious how each episode is going to end. For Halloween, we've got Rudy's friend, Devery, who wants to go out on Halloween night to scare old people... because they're old! Like that creepy old Ms. Bankwell. Since he's Rudy's friend, that tells you that Devery is kind of a weenie. On top of that, he apparently likes to run around in half-shirts with his belly-button showing. As a kid, I remember watchig this and thinking Devery was Weird Harold, since their heads were drawn somewhat alike. Checking the cast list, they even had the same voice actor, which may have thrown me off. 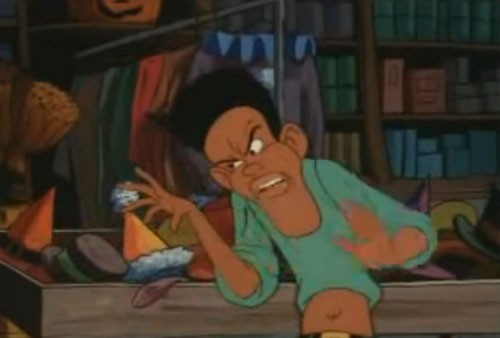 After being thrown out of a thrift store, the gang all make their own homemade costumes. Notables are that Fat Albert is "Super Albert", Russell is a "giant" decked out in Robin Hood get-up and Bill is a feather duster. Not sure exactly what Dumb Donald is supposed to be; maybe a generic ghost? He gets my vote for scariest costume, as he sorta' looks like the Scarecrow from "Batman Begins". 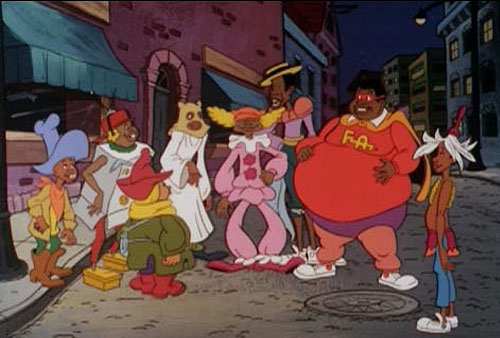 The kids just want to see a movie and go trick-or-treating, but Devery (and to a lesser extent, Rudy), just want to scare old folks. Their antics get the gang thrown out of the movie theater. A bummer, since "Space Squids that Ate Pittsburgh" sounds like vintage Cosby. In fact, if you keep your eyes open in the scenes in the theater's lobby, you'll catch a poster for "The Chicken Heart that Ate New York", another old Cosby sketch. 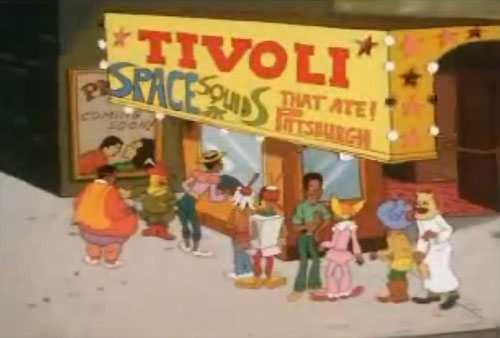 After getting thrown out, the gang visits Mudfoot Brown, the bum from their junkyard hangout. Voiced by Bill Cosby in 1977, he sounds like Bill Cosby in 2014! Rudy and Devery get scared when they see Mudfoot walking around in his pajamas. Mudfoot's friendly to the kids, but instead of giving them Halloween hand-outs, he takes some from their bags. 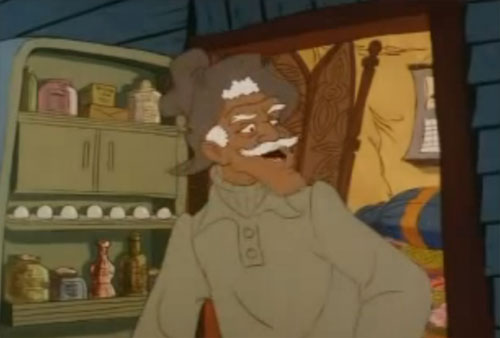 The last act revolves around "Old Lady Bankwell", who lives in a creepy house on the hill. Russell, being the bad-ass he usually was, isn't scared and takes off to the house. Devery's little sister, Melba, goes along as well. The gang is convinced Russell and Melba are being eaten. Devery is shaking like crazy and hides behind a tree while the Cobsy Kids all bum rush the front door. When they get in, they find Russell and Melba sitting around, drinking soda and eating candy. Old Lady Bankwell is a nice widow, who gives all the kids more soda and candy. Okay, by today's standards THAT sounds creepy-- an old lady who likes to take kids into her house and give them candy. An old lady who looks like Biz Markie in the "Just a Friend" video, no less. 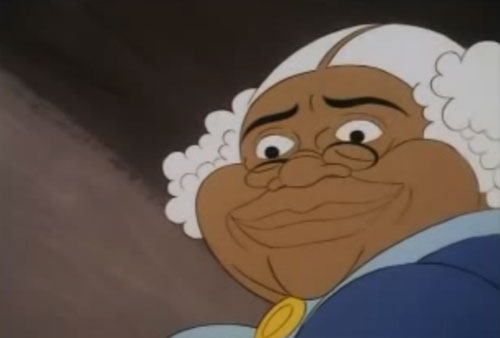 Anyways, the kids and Ms. Bankwell hit it off. Even Rudy likes her. Albert says that they'll all be back on Saturday to mow her lawn. Devery stayed outside and, as expected, is now having second thoughts about his scae tactics. Melba has bad news for him, too: their father is upset at Devery and is here to punish him. We're not told what, exactly, is going to happen, but "Dad" looks like a body-builder who wants to whup wholesale ass on Devery. So I guess the (secondary) moral is: "don't run around on Halloween night, else your old man will whup ya'". 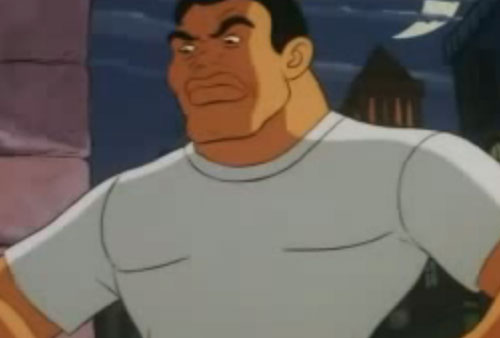 A final Cosby voice-over tells us that the gang will be back for a Christmas Special! After Halloween Havok and Thanksgivin' Thumpin', we're usually fairly burned out on holiday-related crap here on Da' Site. But ya' never know. We just might bust out with Holiday HECK one year.

Why'd You Watch This?
To me, it still seems like it'd be a kick to hang with Fat Albert's crew. Depending on how you view this episode, it may have a laugh-track. Canned "laughter" that plays at random cartoon antics-- like someone falling off a roof or two guys bumping into each other. The humor mostly lies in the interaction between the gang and their dialogue. While Fat Albert has cult appeal, it's obviously targetted at an elementary school audience. Which is fine, because this is something that might work on that same audience in 2014. Well, not taking into consideration the other differences between 1970s and modern animation that might turn away kids from it. This isn't a classic by any means, but if you have a Halloween party, you might be able to show it around 1:00 am when people are nicely intoxicated and things are winding down. You can't help but smile when you think of Fat Albert.